The Sinatra Walking Tour: Hoboken With Ol’ Blue Eyes Himself

When most people think about Hoboken they think of Ol’ Blue Eyes: Frank Sinatra, the “kid from Hoboken who got the breaks,” as writer Bruce Bliven coined him. All over the Mile Square, tributes pay homage to this musical and historical legend, as Hoboken was his birthplace and where he found his fame. The city is decorated with all things Sinatra from restaurants to landmarks that feature all parts of his life.

Thanks to the Hoboken Historical Museum, we have put together a Frank Sinatra Walking Tour around Hoboken to see all of the significant locations that played a huge role in shaping him into the man he was. Keep reading for all the spots to check out on a Sinatra walking tour to see Hoboken through ol’ Blue Eyes himself. First on the list is 415 Monroe Street, a “cold water” flat where Francis Albert Sinatra was born on December 12th, 1915 to immigrant parents Natalia Della Garaventa (known as Dolly) and Antonino Martino (“Marty” — explanation to follow) Sinatra. The building was torn down in 1970 but the legacy lives on in the spirit of the town. In 1996, the city memorialized the home’s location with the plaque pictured above. Fun fact: Sinatra weighed over 13 pounds at birth. He was delivered using forceps, which caused permanent damage to his face and ear. ^Sinatra with his mom at St. Francis Church

Sinatra was baptized at St. Francis Church, located at 308 Jefferson Street, on April 2nd, 1916 by his Godfather, Frank Garrick. This church continues to serve the Roman Catholic community of Hoboken and holds strong to its Italian roots, offering mass in Italian on Sundays. Despite his many divorces, marriages, and quarrels, Frankie remained spiritual throughout his life.

Stop No.3: Site of Marty O’Briens at 333 Jefferson Street 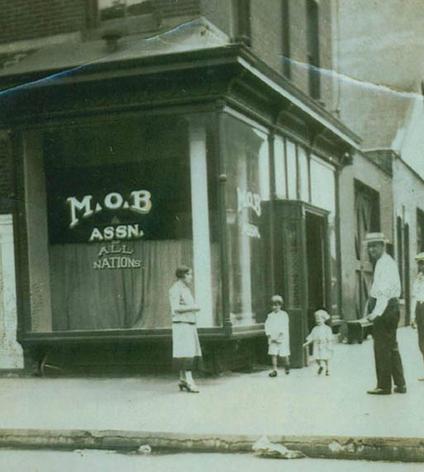 Next on the list is 333 Jefferson Street, where his parents, Marty and Dolly owned a bar and grill called Marty O’Briens. Sinatra’s father went by the name Marty O’Brien during his boxing days because of the large Irish population in the area. He named this spot after his boxing persona.  Sinatra used to sing here quite a bit in his day and his presence always drew a large crowd.

Read More: A Hoboken Walking Tour: A (Literal) Step Into The Past

Tutty’s Bar at 610 Adams Street is now a residential area of Hoboken, but it was best known for being the spot where Sinatra and his friends would gather. They would hang on the corner and he would sing a capella. Imagine witnessing an impromptu Blue Eyes concert back in the day — total swoon.

Continuing on 6th Street, towards 354 6th Street, was the Jefferson Hall and Weightlifting Club. Sinatra joined this club during the Great Depression. He paid $1.00 per month for membership. The iconic St. Ann’s Church at 704 Jefferson Street still holds mass to this day and continues to host the most visited Italian festival in the area. It was here where Sinatra introduced President Ronald Regan on a campaign trail stop in 1984. The gathering took place in the church gym where they ate and mingled with fellow Hobokenites over ravioli and sauce. Hoboken’s most well-known gem is Dom’s Bakery at 506 Grand Street, where Sinatra and his family used to get all of their bread. Even after Sinatra left town, he would always return back home for the best bread in Hoboken (and the world, for that matter). The Firehouse Engine Co. No. 5 is an important part of Hoboken history as Marty Sinatra served Hoboken as a firefighter and later as a fire captain at this firehouse. This building is now a private residence. Even out of towners know of Leo’s Grandevous at 200 Grand Street and can smell the delicious Italian food from down the block. This was one of Sinatra’s favorite local spots and he ate there often. The restaurant still reserves a chair for him and honors his legacy with pictures and memorabilia adorning the walls. Leo’s makes some of the best Italian food in Hoboken. Just across the street where the eatery sets up its extended outdoor dining, it commissioned a mural of the star in 2020, completed by a local, female artist. It reads “Come eat with me,” a play on his hit song “Come Fly With Me.” Once the Jersey Observer Newspaper, located at 111 Newark Street and, originally named the Hudson Observer, Sinatra worked as a copy boy earning $12 a week. Hoboken City Hall, at 94 Washington Street, is a landmark in and of itself. The city notably honored Sinatra on October 30th, 1947, when it celebrated Sinatra Day. He was driven up to Washington Street on a fire truck by his father, where screaming fans and friends gathered to watch him receive the keys to the city. It was raining that day, but that didn’t stop the crowds from being there. Sinatra attended Demarest High School on 4th and Garden for only half a year. During that time, many of his classmates and peers left school. Sinatra followed suit and dropped out. Now, this spot is known as the Hoboken Middle School.

Stop No. 13: The Hoboken Public Library In 1927, the Sinatra family moved to this location. His parents chose this neighborhood because it was a much wealthier German/Irish part of Hoboken. It continues to serve as a residential location in town and has been renovated since. The Joseph F. Brandt Primary School at 215 Ninth Street is where Sinatra attended elementary school. He was quite an animated child and always had a stage presence, even at a young age. His mother made sure that he was always well dressed.

The house at 841 Garden Street was the house where the Sinatra family moved in 1932 when Frank was 17 years old. He had his own bedroom on the top floor of this family home. The home at 837 Garden Street served as another residence for Dolly and Marty Sinatra. The one-bedroom and one-and-a-half-bath brownstone apartment still stands today and is currently estimated to be worth $1.8 million on Zillow. The house at 909 Hudson Street was the house that Frank bought for his parents after becoming a big band singer.

Stop No. 19: The Sinatra Lounge at the Hoboken Historical Museum The Museum has a dedicated space for everything-Ol’ Blue Eyes called The Sinatra Lounge. Visitors can sit back on the couch and watch some of his movies, as well as documentaries about Hoboken, listen to his records on a circa 1920 vinyl player, flip through books about his life, and marvel at two paintings done by Sinatra himself that were donated to the Museum – a true rarity that all Sinatra fans should see for themselves. The walkway has a permanent portrait and plaque in Sinatra’s honor as well –a great photo op if there ever was one!

Stop No. 20: Stevens Institute of Technology The tour ends at Stevens Institute of Technology at 1 Castle Point Terrace, one of the most beautiful views in all of Hoboken, where Frank Sinatra was presented with an honorary Doctoral Degree in Engineering. This was awarded to him on May 23rd, 1985.

A new statue of Frank Sinatra has debuted at the Sinatra Park Amphitheater beside Blue Eyes, next to Sinatra Park. The statue was unveiled this year on his birthday December 12th. It’s a large installation that depicts him leaning against a street light post with one hand in his pocket and the other tipping his hat – in true Sinatra form. Of course, he’s wearing a suit and tie, shining a smile.