A Guide to Classic Italian Desserts in Hoboken

Italian bakery cases can be a simultaneously mouth-watering and overwhelming sight. They’re filled with an assortment of elaborate pastries, colorful cookies, and decadent cakes, many with hard-to-pronounce names. Of course, you can simply point to what looks good, but you’d be missing out on some pretty sweet history {get it?}. Keep reading for a guide to some classic Italian desserts, then find out where to find them in Hoboken. 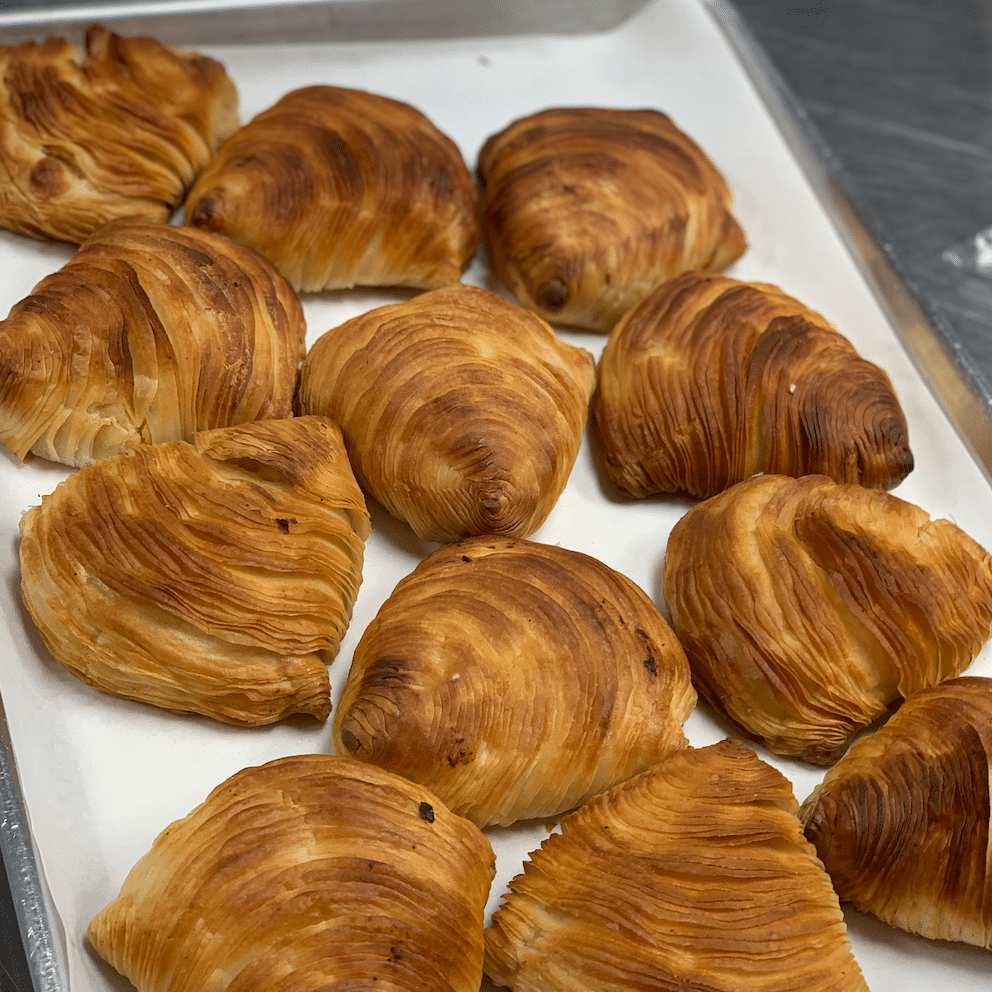 The king of Neapolitan pastries is the sfogliatella, a seashell-shaped, layered pastry filled with ricotta cheese. Legend has it that the dessert was created by a nun on the Amalfi Coast in the 17th century, and it showed up in Naples about 100 years later. The plural, sfogliatelle, roughly translates to “little leaves.” Many Italian-American bakeries sell a similar pastry called a lobster tail, which is larger and filled with sweeter pastry cream.

Hoboken has no shortage of sfogliatelle. It’s the only pastry made regularly at Dom’s Bakery, which is best known for supplying local restaurants with focaccia, baguettes, and other bread. You can also find them at Giorgio’s Pasticceria, Losurdo’s, and Alessio’s. At Losurdo’s, sfogliatelle are only available on Sunday until the shop sells out. St. Patrick gets a lot of attention in March, but many people of Italian heritage associate the month with a different saint: St. Joseph. The unofficial pastry of Festa di San Giuseppe, or St. Joseph’s Day, is the zeppole: a doughnut-like ball of fried dough coated in sugar and filled with jelly or cream.

During the weeks leading up to St. Joseph’s Day, Giorgio’s pumps out zeppole like crazy. “They’re a sign of spring,” says Mary Grace Castiello, whose family has owned the shop for decades. Dolce + Salato an Italian café and pasticceria that opened in the summer of 2018,  drew a big zeppole crowd for its first St. Joseph’s Day last year. Carlo’s Bakery also has them available.

Of course, zeppole shows up again in July for a Hoboken tradition — St. Ann’s Feast. The zeppole prepared by Saint Ann’s Guild volunteers have become a local legend, and people line the streets year after year to get a taste. The origin of Italy’s best-known dessert is largely a mystery. Many accounts point to the Sicilian city of Palermo, but the filling may have first been created by ancient Arabic people. Whatever the origin, the treats became associated with Sicilian Carnevale as a fertility symbol. In Italian, cannolo means “little tube.” The tube-shaped fried pastry shells are usually filled with ricotta cream, though there are tons of modern variations.

It’s widely believed that a proper cannoli must be filled to order unless you want a soggy shell. For a top choice in town, head to Giorgio’s. Mary and her team still follow the same old-time recipe from the shop’s early days.

The cannoli at Losurdo’s are also not to be overlooked. “We do everything old school,” says Danny Losurdo, who owns the shop with his brother Nicky. “With cannoli, it’s the way you make the cream. We make them completely different from everybody else, and we have a special recipe.” Other places to order it are at Carlo’s Bakery, Dolce + Salato, and Alessio’s. These tricolor cookies are actually an American creation. In the early 1900s, Italian immigrants made cookies with bright white, red, and green layers — a tribute to the Italian flag. They usually include almond paste, jam, chocolate, and food coloring.

Carlo’s Bakery is famous for its rainbow cookies, which consist of almond cake layered with raspberry-apricot jam and topped with dark chocolate. The cookies are so popular that the shop ships them through Goldbelly, which means you can send the Hoboken favorite to friends and family anywhere in the country. Dolce and Salato also carries them from time to time. Dolce + Salato sells a variety of Italian cakes and pastries prepared by Palazzone 1960 in Wayne, a pastry shop that gets its baking ingredients directly from Italy. In addition to ricotta cheesecake, the café sells cannoli cake, tiramisu cake, and chocolate mousse cake, plus plenty of Italian cookies, pastries, and coffee drinks. Maurizio Dolce, one of the owners, says what sets Palazzone’s desserts apart is that they aren’t overly sweet. Giorgio’s also serves this up by the slice. Sicily is known for its almonds and pine nuts, both of which show up in these chewy Italian macaroons. Usually round or crescent-shaped, they’re commonly eaten around Christmas.

Where to Get Them In February, pastry shops in the Sicilian city of Catania serve mini Sicilian ricotta cakes. Rum-soaked sponge cake is wrapped in marzipan and icing, then topped with a cherry. The desserts are also called St. Agatha’s Breasts {you can probably see why} because they’re a tribute to the patron saint of Sicily, whose breasts were cut off when she refused to deny her faith.

Where to Get Them

Cassatini are labor-intensive to make and much harder to find than other desserts on the list. In fact, Giorgio’s is one of the only bakeries in the area that makes them, and only around the holidays. Carlo’s Bakery sometimes carries them as well.