Nathan Lane: One of Jersey City’s Most Famous Entertainers

Hakuna Matata, what a wonderful phrase! For all The Lion King fans out there, Timon and Pumbaa are two of the most lovable characters. The voice actor behind Timon is none other than actor Nathan Lane, who has starred both on stage and on screen in a range of roles for the last few decades. What many may not know is that this beloved actor actually hails from Jersey City. In honor of Pride Month, we celebrate one of the most famous LGBTQ+ people to ever come out of Jersey City: Nathan Lane. Read on to learn all about The Lion King’s Nathan Lane and his Jersey City roots.

Nathan was born on February 3rd, 1956 as “Joe” Lane and hailed from a long line of Jersey City residents. The Lane Family immigrated from Ireland in 1880 and became US citizens in 1900 while living in New York City. Around 1909, the family moved to Jersey City where Nathan’s father, Daniel Lane, was the first Lane born in New Jersey at 54 Henderson Street (a street renamed ‘Marin Boulevard,’ the location of which is currently near Surf City). Nathan’s father married another Jersey City native, Nora Veronica Lane. By 1950, the Lane Family had moved 3 miles west to the Bergen-Lafayette section of Jersey City into 232 Bidwell Avenue, Apt 31, the interior of which is just as unexpectedly regal as Nathan himself. Nathan’s father was a truck driver and aspiring tenor who died of alcoholism in 1967 when Nathan was just 11 years old. Nathan’s mother took care of the family while acquiring additional work as a secretary, but her struggles with bipolar disorder had profound effects on Nathan.

The School that Started it All: St. Peter’s Prep During lunch, he’d entertain rapt students in the cafeteria as they hung on his every biting and captivating word. This is where he cultivated his persona as a fast-talking, quick-witted comedian exhibiting equal parts pizazz and chutzpah. 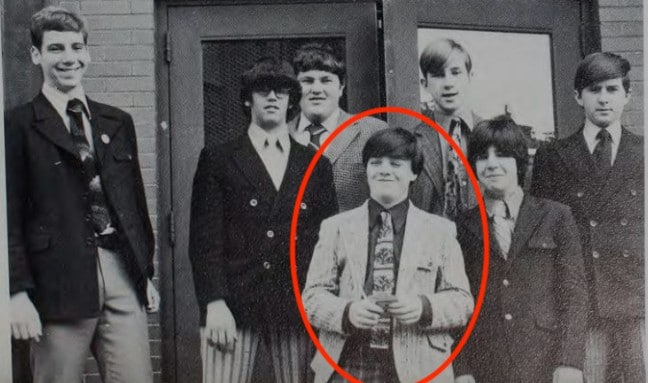 Nathan also sought refuge in the theater, where he discovered his talent and passion. He began to receive leading roles in The Front Page and Arsenic and Old Lace. His performance as the Stage Manager in Our Town led the yearbook to remark: “Joe Lane, Prep’s answer Peter Falk [Columbo].” In 1974, Nathan was voted Best Actor at Saint Peter’s Prep and would go on to become, as the New York Times described in 2010, “the greatest stage entertainer of the decade.” To date, Nathan has received 6 Tony Award nominations and won 3. He’s won 6 Drama Desk Awards, 6 Outer Critics Circle awards, 2 Obies, an Olivier Award, and 2 Daytime Emmy Awards. In 2006, he received a star on the Hollywood Walk of Fame, and two years later, he was inducted into the American Theater Hall of Fame.

But even with all the fame and accolades, Nathan never forgot where he came from. In 2013, Saint Peter’s Prep staged Laughter on the 23rd Floor, a play which Nathan had coincidentally performed on Broadway. To the surprise of everyone at St. Peter’s Prep, Nathan unexpectedly decided to attend the show unannounced. Those on stage had no idea they were performing before one of the most famous and talented actors around. Afterwards, when the lights came on, the audience gasped at the famous alumni-attendee, who was gracious enough to hobnob and take pictures with students. “Keep It Gay” – The Producers

Throughout his career, Nathan became known for playing many ‘LGBT+ roles’ such as his breakout role alongside Robin Williams in the Birdcage though he did win a Tony Award for playing a straight lecher in A Funny Thing Happened on the Way to the Forum.

The press’s fixation on Nathan’s sexuality has sometimes made Nathan feel uncomfortable. In a 1999 interview with The Advocate, Nathan recalled an incident on Oprah where she asked Nathan, “You’re awfully good at that girly stuff. Where did you pick that up?” Fortunately, Robin Williams saw the mortification on Nathan’s face and jumped in, protecting Nathan. Incidents like this made Nathan want to fight the notion that “if you play a gay character and you’re gay, you’re not really acting, no matter how far that character may be from your own character.” This is the very reason Nathan never officially ‘came out’ to the public. He explained, “The truth is, nobody cared about my sex life before The Birdcage… [I find] it difficult to discuss my personal life with total strangers… I don’t greet people by saying, I’m Nathan Lane, and I’ll be your homosexual! I just assumed a lot of people know. It’s never been something I kept a secret.”

Nathan came out to his family in 1977 when he was 21. At the time, Nathan was living with his mother in Rutherford, NJ. He’d decided to move in with his boyfriend and came out to his mother — which, according to Nathan, was fine after the initial shock.

Nathan’s unique and endearing charisma has helped him conjure some of the most memorable characters on stage and film. He played Timon, the wily meerkat in Disney’s The Lion King (1994), as well as the greedy producer, Max Bialystock, in 2001’s Broadway hit The Producers. Nathan’s formidable range has landed him roles from Modern Family to Eugene O’Neill’s The Iceman Cometh; from The Addams Family to Samuel Beckett’s Waiting for Godot; from Stewart Little to Angels in America, just to name a few. Thus, Joe ‘Nathan’ Lane has become an actor whose range is just as diverse as the city wherein he grew up and developed his craft.