We know you’re busy — which is why we take care of the leg work when it comes to local news and bring you a weekly roundup of everything you might have missed in Hoboken + Jersey City. Catch up on all there is to know, including the following headlines: Jersey City ranked as the #1 most ethnically diverse city in the country; a live snake was found on an airplane at Newark Airport; the Jersey City Council approved a $724M municipal budget; and so much more. Keep reading for all the news you missed this week in Hoboken, Jersey City, + beyond. Local french bakery Choc O Pain recently announced it will be opening a new location in Jersey City at 244 St Pauls Avenue. The new store/cafe is located within the ground floor lobby of the new Le Léo luxury rental residence, developed by Park Stone Management + Fields Grade. All items can be ordered from the website for pickup. Click here to learn more.

Art Fair 14C will take place from November 11th through November 13th at the historic armory located at 678 Montgomery Street in Jersey City. This is New Jersey’s largest visual arts event and functions as a way for artists to make a living. The show this year will feature thousands of works of art from all genres. In a recent WalletHub study, Jersey City ranked as the #1 most ethnically diverse of 500 major cities in the United States, per Patch. Approximately 42.5 percent of local residents were born in other countries. Other statistics that factored into the rankings were ethno-racial diversity, linguistic diversity, and birthplace diversity. Access to period supplies is an issue that affects millions of menstruating people globally every day. When looking locally, a recent study by The Flow Initiative found that approximately 30% of students in Hudson County struggle to access items such as pads, tampons, sanitary wipes, liners, and more each month. In understanding the need for awareness and resources in this space, we have partnered with The Flow Initiative to create Project Local Access, a drive for period supplies to distribute to those in need and the community at large. From now until November 12th, we’re accepting new/unopened donations of period products at any of our participating locations. Click here to learn more about the drive and how you can donate.

Abbott Recalls Baby Formula in NJ Due to Sealing Issue Baby formula manufacturer Abbott recently announced a recall of a specific kind of liquid formula, Patch reported. Less than 1 percent of the bottles in question potentially have improperly-sealed lids, which could cause gastrointestinal symptoms. This recall is not expected to impact the nationwide infant formula supply.

A new holistic wellness center has opened in downtown Hoboken. Located at 2 Marine View Plaza Office #5 in Hoboken, Mastani Holistic Center has both in-person and virtual classes, workshops, training events, and even a crystals and incense store in the studio. Visitors can expect to see ancient practices such as yoga, ayurveda, reiki, pranayama, meditation, crystal healing, herbalism, and more — each area designed with a mission to help everyone achieve their ideal mental, physical, and emotional health. Click here to read about Mastani Holistic Center in Hoboken. On Thursday, October 20th, a car flipped over in uptown Hoboken not far from Wallace Elementary School. According to Patch, the accident happened around 5PM. The Hoboken Police Department shared via social media to avoid the area at 5:19PM and by 6PM, the area was clear and roads were reopened. On Thursday, October 20th, U.S. Attorney Phillip R. Sellinger announced that Marc Lazarre, 37, has been charged with bank fraud and aggravated identity theft. According to NJ.com, Lazarre used the ID of strangers — including two individuals who died in 1988 and 2013. He opened bank accounts in the victims’ names and withdrew funds that totaled more than $1M.

Live Snake Found on a Flight at Newark Airport To set the mood for Halloween, a Newark Airport flight has unintentionally reenacted a real-life version of Snakes on a Plane (sort of). On Monday, October 17th, a snake — yes, a live snake — was found on a United Airlines flight that had just landed after flying from Tampa, terrifying passengers. It’s unclear how the snake ended up on the plane, though it was promptly + safely removed. This comes just weeks after almost 200 flight attendants were seen protesting outside of the airport for chaotic, unsustainable work conditions. Click here to find out exactly what went down with this snake on a Newark flight. On Thursday, October 27th, Morris Park will be rededicated in a ceremony scheduled for 6PM. According to NJ.com, the park located at the corner of 47th Street and Broadway is named after a prominent Black physician, Dr. David Morris. Renovations were completed earlier this year.

A New Grocery Store is Coming to Hoboken, and it’s Not Wegmens Brooklyn-based shop Dumbo Market is officially coming to Hoboken at 1425 Washington Street, and construction has already begun on the vacant (and massive) space. This move marks Dumbo Market’s first New Jersey location. We’ve covered what you need to know about this new uptown supermarket. Click here to read about Dumbo Market, coming soon to Hoboken. New Jersey state officials have filed a lawsuit against five fossil fuel companies who allegedly knowingly share misinformation about climate change, per Hudson Reporter. The companies include Exxon Mobil Corporation, Shell Oil Company, Chevron Corporation, BP, ConocoPhillips, and American Petroleum Institute. The companies also allegedly were not fully transparent about the degree to which their fossil fuels have impacted the environment.

A New Vietnamese Restaurant is Coming to Jersey City 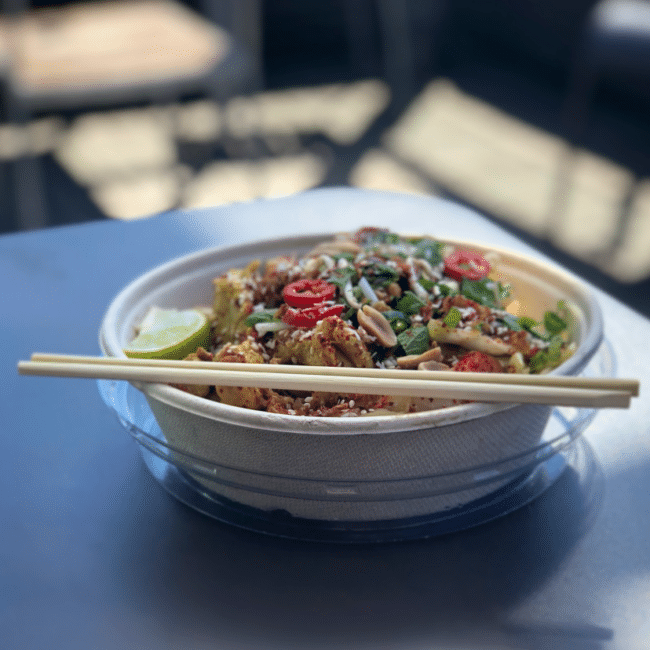 A fresh Vietnamese eatery called Quick Pho has officially been given the green light to revamp a storefront at 126 Baldwin Avenue. The new storefront will sit in almost the exact geographic center of the city, situated about halfway between Journal Square and McGinley Square. While we don’t know much about Quick Pho’s menu offerings, we do know it will specialize in takeout and delivery — and that’s worth getting excited about. Click here for what we know about this new Vietnamese restaurant in Jersey City.

Local restaurant Fire + Oak is opening a new location on Kinderkamack Road in Oradell, per Daily Voice. This new eatery will be slightly different from what we know in Jersey City as it will be called Oak House Grill. A menu has not yet been announced. Renovations are still underway.

The Chambord fire in 2021 displaced multiple businesses in Hoboken, including Barsky Gallery which has been showcasing original artworks from contemporary artists since 2011. Accordion to Caryl Communications, the gallery recently found a new home in three rooms at Mission 50, located at 50 Harrison Street in Hoboken. The space is about 850 square feet and Barsky has expanded into the hallway. On Tuesday, October 18th, the Jersey City Council held a special meeting during which they voted on and approved a $724 million municipal budget, per NJ.com. The plan is nearly $100 million more than last year’s budget and was voted against by James Solomon and Frank Gilmore. On Sunday, October 23rd at 3PM, the Hoboken Historical Museum is hosting an appreciation event for the late gay rights activist, Marsha P. Johnson. According to Patch, the event will include performances and memories by Randy Wicker, Linda La, Bobby Miller, Penny Arcade, Sanina L. Clark, and John Herliker. The event will air on the museum’s YouTube and Facebook. On Saturday, October 22nd, the Jersey City Library’s Community Awareness Series hosted a celebration of the last 45 years of bringing local cultural awareness to the community. According to NJ.com, the event featured jazz flutist Sherry Winston and her quartet. Sherry has performed for two presidents and describes her style as jazz fusion. Former football quarterback and longtime Hoboken dentist Dr. Thomas Glatt recently passed away at the age of 81. According to Patch, Dr. Glatt played football for Demarest High School in Hoboken and continued to play at St. Mary’s of the Plains College in Kansas. He graduated from NYU Dental School in 1967, and spent four decades serving his clients in Hudson County. Memorial services were held on Wednesday, October 19th. On Wednesday, October 19th, the Hudson County Schools of Technology hosted a job fair, according to NJ.com. The job fairs are designed to give students and the public a place to network and create professional connections with those in their field. The event was held at High Tech High School in Secaucus. Another job fair event is scheduled for next month as well. On Thursday, October 20th, the City of Hoboken hosted a public outreach session to get input on how the property located at 59 Washington Street should be used. According to Patch, the ground-floor space is currently occupied by CVS and according to local officials, that wouldn’t necessarily change in redeveloping the space.

A post shared by the little play co. (@thelittleplayco)

On Thursday, October 27th, The Little Play Co. in uptown Hoboken is hosting a fundraiser for Breast Cancer Research. This adults-only event will include beauty (Botox treatments from Studio 17 Cosmetics + Wellness), bubbly, and bids (a silent auction). Registration starts at $75 per person and all proceeds go to breast cancer research and support. Click here for all the details.

On Monday, October 24th, Tessa International School will celebrate the nearly 60 cultures represented in the school as part of United Nations Day. The event is intended to engage the school community to learn about the various countries as well as to bring families together as a community of the world.

A new exhibit recently opened at the Liberty Science Center in Jersey City that highlights the discoveries of Pompeii. According to NJ.com, this interactive exhibit allows visitors the chance to hear and feel the roars of Vesuvius as it erupts. Guests can also take on the role of an archaeologist as they discover over 100 artifacts via 3D representations of the city. On Saturday, October 29th, Kearny will host its annual Doggie Halloween PAWrade and Festival at Arlington Depot Park, per NJ.com. The highlight of the event is the Doggie Halloween Costume Contest. Pups interested in participating should meet on Midland Avenue between Elm and Forest Streets.

Harborside Complex Under Contract for $420M Jersey Digs reported this week that the Harborside complex is officially under contract to change hands next year. The waterfront property consists of Harborside 1, 2, and 3 and will sell for $420 million. Veris Residential still owns Harborside 5 which is situated across the street from the rest of the complex.