Living in the Mile Square has many perks. Its proximity to Manhattan is one of the most obvious. But perhaps most importantly, Hoboken itself is home to deeply-rooted food culture as well as some highly-coveted restaurants that are well known even outside of the state. Living here automatically makes locals feel like the keeper of that information when friends from the outside world will ask, “What do I have to do in Hoboken?”

And really, it’s not what you have to do, per se, it’s more about what you have to eat. So, for when friends come asking where the most historical, must-try spots to dine at are in Hoboken, here is a list so you are not stumbling for words. Join us on this culinary tour of the Mile Square, as we guide you through this delectable city from top to bottom. As one of Hoboken’s claims to fame, Dino + Harry’s is a special spot for fine dining in the Mile Square. This elegant and intimate restaurant holds many historical and culinary treasures. Many celeb sightings have occurred in this saloon-like steakhouse as Eli Manning made frequent appearances here in his time living in Hoboken. The menu is elevated, yet typical of a steakhouse, with different prime cuts of meat and a la carte sides. Additionally, Dino + Harry’s has a selection of pasta and seafood that is above and beyond.

M+Ps is a staple in Hoboken and was started in 1981 by the Biancamano family. It is a hot spot for those who want great Italian food. The deli features a selection of made-to-order sandwiches, hot food, and more. Most notably, M+Ps is known for its fresh mozzarella, which won first place at the Hoboken Mutz Fest quite a few times. Owner Pietro’s number one sandwich weighs in at a whopping two and a half pounds and includes ham, capicola, prosciutto, pepperoni, and, of course, mozzarella. This Uptown gem has been in business since 1974 when Anna Marie and Giorgio Castiello first opened shop, and is sadly closing soon. Known for the cannolis, cakes, Italian cookies, and pastries – Giorgio’s has a reputation for authentic, handmade desserts. Seriously, the cannolis are out of this world. Now run by their daughter, Mary Grace, Giorgio’s is a staple in the Mile Square and currently continues to serve the Hoboken community with so much passion. For a quick drink break, head to Pilsener Haus and Biergarten on 14th Street.  This  Austrian-Hungarian beer garden opened in 2012 and serves sausages and other favorites at the communal tables inside and out. The decor will transport you to Europe, and the selection of beers is impressive. If you’re coming by in the winter, make sure to check out the outdoor winter snowglobes that you can enjoy with a group of friends.

Read More: The Best Hoboken Pizza Spots (According to Your Cravings) If you are able to snag a seat at one of the eight small tables, consider yourself lucky. And now, with curbside pick-up available and outdoor dining available, more diners can enjoy the incredible selections at this locale. The Sunday Sauce is a must-try here if it’s available. And don’t sleep on the pork chop: it’s the other fan-favorite dish and could feed a small army. What’s most amazing about Augustino’s is the sense of family within the restaurant and once you dine there, you become part of it, too! Being in business for 125 years says a lot about this well-known Hoboken French bistro. Originally opened in 1895 and called Dillenger + Jefferson’s, the building was also an ice cream parlor and “hair salon” during the days of Prohibition — a true speakeasy. Today, the restaurant is run by Travis Young and Steve Schneider. Open for brunch, lunch, and dinner, Elysian’s menu is primarily French bistro with some classic favorites. The French Onion soup is really something special as is the Elysian burger. Elegance meets divine cuisine at Amanda’s, one of Hoboken’s fancier restaurants. Currently, the menu is Argentinian-based, featuring empanadas, croquettes, flank steak, pork shoulder, and so much more. Make your reservation ahead of time, as people will be flocking to sip wine at the beautiful bar once again, and snagging a reservation may continue to be a challenging feat. Anthony David’s has been a long-standing restaurant in Hoboken with a robust menu created by a man with as much heart as talent. Chef Anthony Pino is a local celebrity in Hoboken as his restaurants continuously bring together people through the medium of food. The selections are simply incredible, with classic favorites and new twists on dishes that only someone of his caliber could create. The wild boar ragu is on another level. What’s important to remember, each dish has layers and layers of flavor just waiting to be tasted. A true Hoboken landmark. Ali Baba is one of those gems tucked away even though it’s on the main drag — serving up authentic middle eastern cuisine in the Mile Square since 1983. From the great food to the service that makes you feel right at home, Ali Baba’s owner Ibrahim does the cooking and will even serve customers sometimes, too. The falafel and hummus are top-notch, and no matter what you order for dinner, be sure to order the Turkish coffee and honey cake for dessert. A slice at Benny Tudino’s could set anyone over the legal pizza-eating limit but no one’s counting. Benny’s is known for extra-large slices, deliciousness, and small-town pizzeria feel. This pizza parlor has been in the Mile Square since 1963 and has since proved to locals that a pizza could rival the size of the moon. The motto at Benny’s? One slice — everybody knows the rules. That’s it. Trust us on that one. This seemingly-hidden Hoboken gem is known for its daily specials. Court Street’s weekly Lobster Fest is what all Hobokenites look forward to, which happens every Wednesday and Saturday, thankfully. The restaurant also offers brunch, lunch, dinner, desserts, and drinks. Definitely don’t pass up the Surf and Turf dinner — filet mignon and a lobster tail. Karma Kafe is home to the most delectable Indian dishes in the area. This cozy Indian spot offers big portions + a lunch buffet in a simple space that has survived a fire several years back. It also offers sidewalk seating and a full bar. The lamb vindaloo + chicken tikka are always classic dishes, but this special spot has incredible naan, roti, paneer, and other authentic dishes pair nicely with a mango lassi. Dom Castellitto, the owner of Dom’s bakery, has been in business since 1979. Those who have been to Dom’s know that from the bread to the pastries, there’s nothing quite like it. In fact, Ol’ Blue Eyes himself used to have this bread shipped to him when he was living in California. If it’s good enough for Sinatra, well then, it’s good enough for the rest of us. Two important things to remember when going to the bakery: get the focaccia bread and have a sfogliatella. 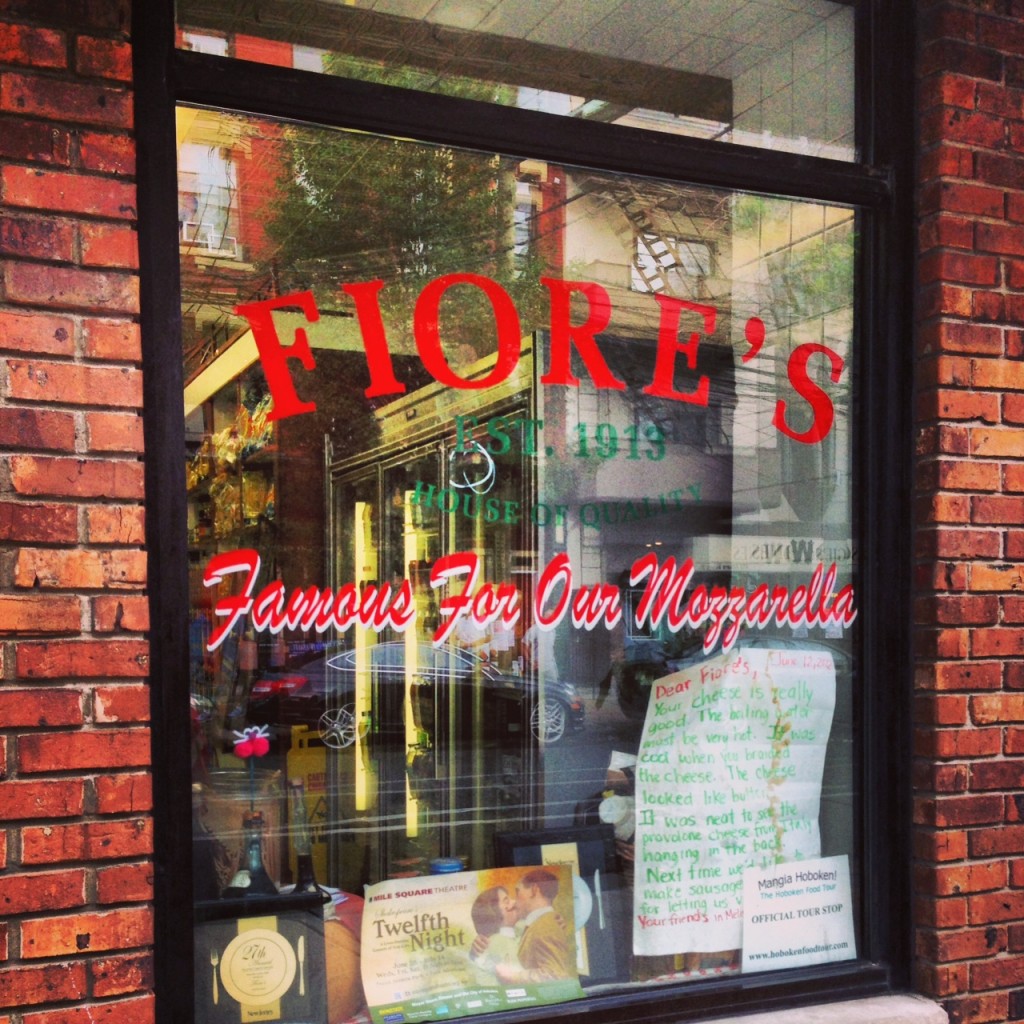 There’s a reason that the line out of Fiore’s is always about half a block deep and the answer lies in two little words: fresh mutz. The Amato family has been in business for as long as anyone can remember. While mozzarella is always available, the best days to go are Thursday and Saturday for the roast beef, mutz, and gravy special. Don’t forget, Fiore’s is cash only. With just over 80 years in business, Leo’s Grandevous is known to be one of the oldest restaurants remaining in Hoboken, and for obvious reasons. Not only has this gem dedicated its space to Sinatra, decorating every inch of wall space with Ol’ Blue Eyes, but this classic Italian restaurant also boasts flavors that are out of this world and dishes that would even revive Sinatra himself. The chicken parmigiana and ravioli are always a great choice at Leo’s. Hoboken is no stranger to Cuban food, and La Isla is at the top of our list. The original location in downtown Hoboken is small but the menu packs a punch that everyone will enjoy. While the restaurant has a complete selection filled with Cuban favorites, the daily specials are what to look out for. Ropa vieja (literally translating to “old clothes”) is a Cuban staple, it is shredded flank steak that is bursting at the seams with flavor.

Everyone knows Carlo’s Bakery originated in Hoboken — and it shows. People near and far flock to this bakery, not only to pick up delicious treats but also to snag a photo of the iconic signage out front. Whether looking for cakes, pastries, cookies, or cannolis, Buddy isn’t called the Cake Boss for nothin’. Piccolo’s has been open since 1955 and is just one of those spots. The menu is long-standing and filled with family recipes. Of course, a cheesesteak is a must but don’t sleep on the meatball sandwich or the famous pasta fagioli. Piccolo’s has blurred the lines of generational gaps and continues to attract customers because of the quality food, an old-school feel, and a major sense of Hoboken pride.