A place definitely has to be one of the top in the biz if its reach and popularity extends beyond its own neighborhood. That certainly holds true for Benny Tudino’s, the legendary pizza place that’s been serving up enormous slices for decades. Many know just how good and satisfying it is, but few know its charming back story. Here’s more about Benny Tudino’s — home of the biggest slice of pizza in Hoboken — and possibly New Jersey: Read More: The Best Hoboken Pizza Spots {According to Your Cravings}

Bari “Benny” Drishti immigrated to the US in the ‘60s from Albania and immediately began working in the restaurant business. In 1968, he went ahead and bought the Washington Street spot {which was originally called “Tudino’s”} that is still home to the famed pizzeria, and thus, Benny Tudino’s was established. Fast-forward a few years, and he and his wife Sophia built it up to what it is today — and have received accolades along the way, including a top rating from Zagat. On any given day, you could find Benny hanging out in the first booth, surrounded by pictures of not only his friends and family but the many celebrities that have frequented the joint, which includes former VP Joe Biden, who came in during his tour of the area after Hurricane Sandy. The front part of the restaurant is a quintessential shop – hard booths to easily slide in and out of to grab a quick bite or to catch up with friends, a glass display case showing off Benny’s pies, refrigerators filled with beverages, and the ancient menu on the wall which looks like it hasn’t changed since the restaurant opened its doors. This may also come as a shock to many, but Benny’s serves more than pizza. The rest of its menu includes Jersey Italian staples like baked lasagna, eggplant parm, and meatballs. 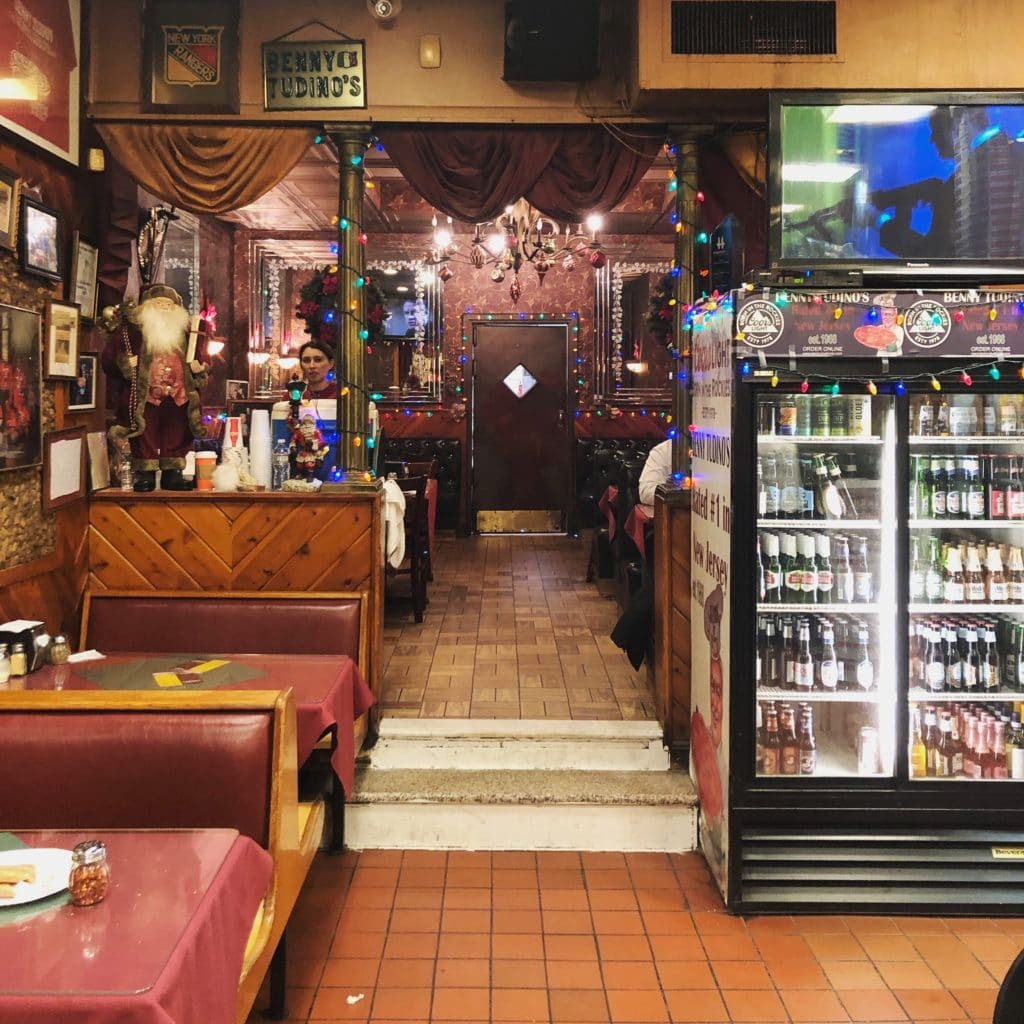 Head towards the back of the restaurant, now, and it’s like a scene from The Godfather. Dark burgundy walls, tablecloths, and leather booths look almost like a movie set. It’s an unexpected formal room in which to devour a $3.50 slice {cash only} but gives the place an authentic charm that visitors can’t help but love – and exactly what Benny himself wanted. 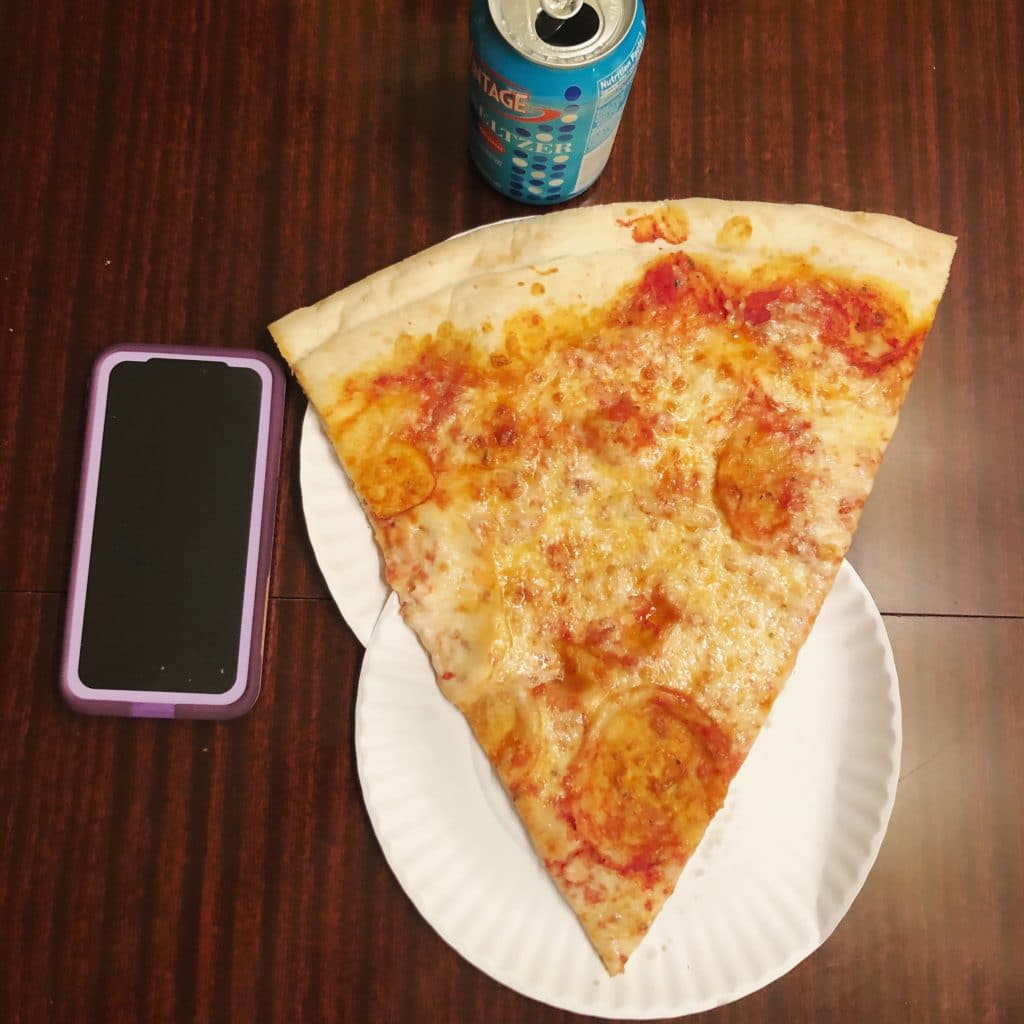 Oh, and let’s not forget the massive pizza slices. So big, in fact, that people began sending Benny’s photos of their newborn children laying next to a slice to show the size comparison. In some cases, the slice of pizza was bigger than the baby. These photos are proudly on display directly next to the cash register for every customer’s viewing pleasure.

Christine Ziobro has been going to Benny’s for years and one day saw that there was a picture of a baby and a slice taped up on the display case. Loving the idea, she did the same with her son Chris in 2010, who was the second baby/slice photo.

See More: We Found 5 Hoboken Hot Dogs Smaller Than a Benny Tudino’s Pizza Slice {And We Have the Photos to Prove It}

“We lived on 8th and Washington at the time, so we would always go to Benny’s for pizza. When little Chris was born, we knew we had to continue the tradition of the slice of pizza next to him!” Ziobro said. “Over the 10 years we lived in Hoboken, we would get to know Benny and often sit with him in his booth. He was so friendly and so is his staff. To this day when we pop in to say hello, we are welcomed with open arms.” The photos didn’t stop with Chris, though. The Ziobros continued to take these photos and hang them up, next with their son Chester in 2012, daughter Eve in 2015, and daughter Joy in 2018, keeping the pizza slice and baby photo tradition alive.

Sadly, Benny passed away in 2015, but his legacy lives on all throughout Hoboken. In 2018, the restaurant celebrated its 50th anniversary by handing out free slices to anyone who came by – and judging by how delicious the food is, Benny’s will definitely be around for at least another 50 years to come.

Have you been to Benny Tudino’s? Have you tried one of the MASSIVE slices? Let us know in the comments below!