Plant Base: A New {Zero-Waste!} Vegan Market in Jersey City

Nothing conjures up opinions and side-taking more these days than the word “vegan.”  And often this ends up in a discussion about which restaurants offer vegan options and which restaurants are, in fact, totally vegan.  From a vegan’s point of view, this is usually a lively conversation that they are more than happy to partake in. But alas, the one thing that has, for the most part, eluded the discussion entirely — which grocery stores or markets offer great vegan options and which ones are, in fact, totally vegan. 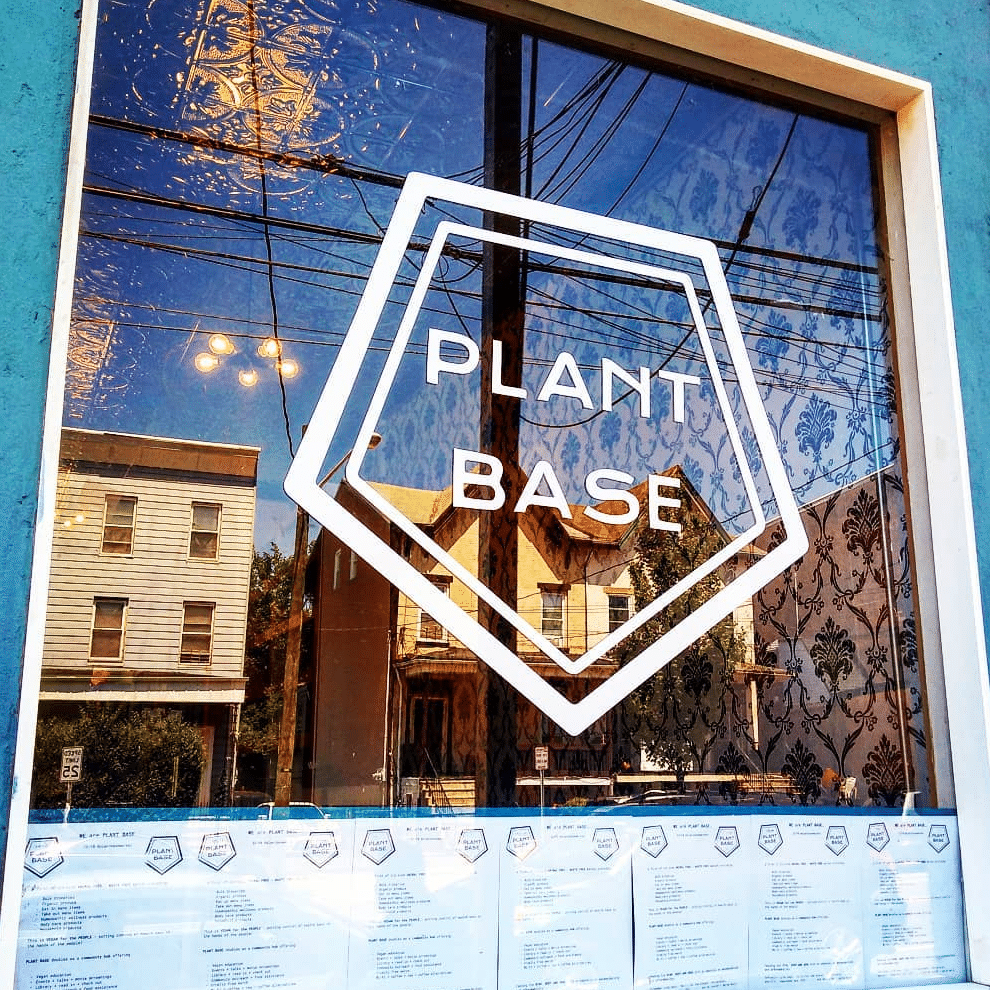 Plant Base is the brainchild of two coworkers turned friends turned activists + business partners.  Dhruva LaTorre and Andy Hertz met while working for a local Jersey City developer, BGT Enterprises, as an architect and construction manager, respectively. Andy was already vegan and an animal rights activist and Dhruva, raised in the Hare Krishna faith, was a vegetarian.  Dhruva also had experience with his family’s non-profit that worked to help feed underprivileged residents in Jersey City and the surrounding communities. After meeting and melding ideas {and Dhruva becoming vegan, too}, the two were headed down a road of activism, animal + humanitarian aid, and a desire to better the environment by offering plant-based, whole foods to residents living in areas that up until now had limited or no access to these options. Non-Nocere kombucha will also be featured in returnable bottles and on tap for growler or cup refill. Grab-and-go items will be packaged in reusable glass containers that you shoppers a one-time deposit for {think a buck or two}, just be sure to bring the container back next time. For other items, shoppers are encouraged to bring their own containers or bags but, of course, there will be options at the store to either buy or borrow a container or bag should someone have forgotten their own. The emphasis is on education and changing our wasteful habits.

“People, as all animals, are inherently opposed to change. It’s understandable that big shifts in behavior take time. It’s nearly impossible for us to change our habits without an influence to guide us, and Plant Base strives to be that influence,” Andy says.

Plant Base + The Community

In terms of education, Plant Base will also serve as a community hub.  Speaking engagements, movie screenings, and cooking classes will be commonplace. There is also an in-house library with books to read while partaking in any of the eat-in options or to check out and read at home at your leisure.

Plant Base envisions this location to be the first of many. The market + its owners are looking to open locations rapidly in food desert neighborhoods {the front lines of the battle for food accessibility}, in order to get much-needed healthy food options to the residents and educate those residents on the importance of a vegan, waste-free lifestyle that will help them become less dependent on unhealthy, fast food options and the pharmaceutical industry.

Read More: Where to Find Vegan Pizza in Hoboken, Jersey City, + Beyond Plant Base is slated to open slowly to the public starting this coming weekend with a live mural painting {courtesy of @distoart and @mr_mustart} + an open house event on Saturday, July 20th from 12:00PM-6:00PM and Sunday,  July 21st from 12:00PM-10:00PM. Starting Monday, July 22nd, Plant Base will be open daily with limited hours {be sure to check their Instagram, @plantbasemarket, for specific hours} until their grand opening on August, 3rd.

Plant Base believes that a vegan lifestyle is much more than just a diet. Dhruva sums it up nicely when he describes the Plant Base ethos as, “…living a guilt-free lifestyle where your actions leave you with a sense of peace and accomplishment. Inconvenience in the moment need not be a long-term state, especially when one considers the impact on the overall well-being of others and the planet. Change your habits and you can change the habits of others…and we can end oppression at all levels and clean this planet up!”

Are you excited for Plant Base or heading there to check it out?