Yet another celebrity was spotted in New Jersey this week — and it’s a big one. Kim Kardashian was seen yesterday hanging out with a couple of kids at Nickelodeon Universe Theme Park in American Dream, located at 1 American Dream Way in East Rutherford. The Keeping Up with the Kardashians reality star was seen taking selfies on the Rugrats Reptar-Go-Round. Kim’s recent tri-state whereabouts could partially be due to her high-profile relationship with comedian Pete Davidson, who is based in Staten Island. She was also recently on The Tonight Show Starring Jimmy Fallon this week, which films in New York. This isn’t Kim’s first trip to NJ — Kim also visited Hoboken many years back when she was dating Hobokenite Kris Humphries. Read on for what we know about Kim Kardashian’s trip to East Rutherford, New Jersey. On June 22nd, The Hive sent HG a DM + some photos, sharing that Kim Kardashian was hanging out at American Dream in East Rutherford. The reality star was spotted taking some awesome selfies on the Rugrats Reptar-Go-Round while spending time at the indoor Nickelodeon Universe Theme Park. According to The Hive, Kim was actively engaged with the kids she was with — and looked fantastic while doing it. Those of us who have lived in Hoboken for a while may remember Kim took a trip to Hoboken about 10 years back when she was engaged to basketball pro Kris Humphries, who lived in Hoboken at the time. While visiting Kris, the two notably took a trip to Modern Nails & Spa for dual mani-pedis. Modern Nails is still standing on 728 Washington Street and was picked by HG readers as a favorite spot to get nails done in 2021. Maybe Kim K will visit this local favorite sometime again in the future. 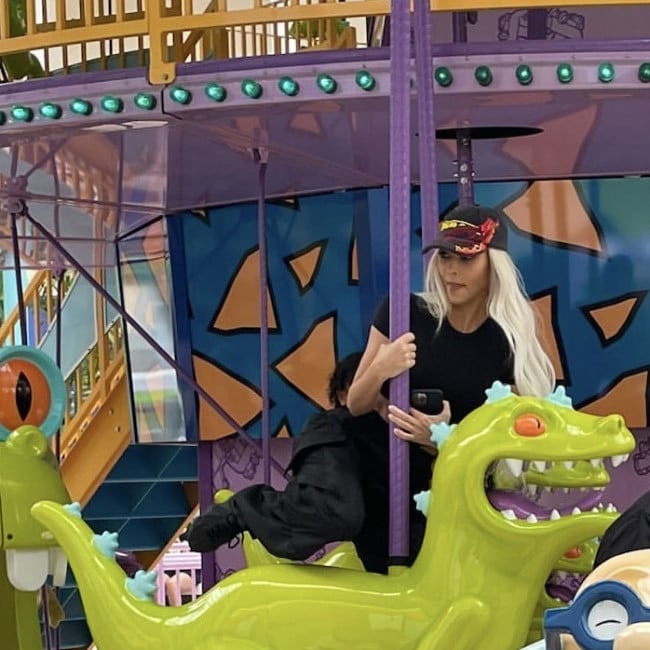 Kim Kardashian is just one of many celebrities to be spotted locally. Bryan Cranston + Aaron Paul took a full New Jersey tour to promote their mezcal back in May. Samuel L. Jackson and Uma Thurman were seen locally while filming their movie The Kill Room. TikTok star Lynja took a field trip to the Hoboken Trader Joe’s to film a dinner date night TikTok with Nick DiGiovanni. And who can forget when Penn Badgley had a favorite local coffee shop? Justin + Hailey Bieber, Maddie Ziegler, Eli Manning, and even Beyoncé have also been spotted locally throughout the years. Suffice it to say, there are no shortage of awesome celebrity sightings in the North Jersey area.

The Hoboken Girl will keep you in the loop as more celebrity sightings come to light. In the meantime, stay in the know with @thehobokengirl on Instagram and TikTok. And be sure to send us a DM if you see anyone noteworthy!