There’s a Tacos + Tequila Bar Opening in Hoboken This Weekend

There’s a tacos and tequila bar opening in Hoboken this weekend. Fat Taco is taking over Coco Havana‘s old space at 32 Newark Street in Hoboken. With remodeling done by the Hoboken Hospitality Group, the restaurant is ready to debut. Hoboken Girl has the exclusive details of what people can expect to see, eat and drink inside the soon-to-be home of birria tacos + tequila at Fat Taco. The space at 32 Newark Street has gone through quite a few changes in the last few years — from Coco Loco to Coco Havana, and now Fat Taco. “Fat,” we’re told, stands for “Fun Art Technology,” the concept behind the rebranding.

In early 2020, Jersey Digs first reported that Hoboken Hospitality Group gained approval from Hoboken’s Historic Preservation Committee to install new signage on the building, which would eventually become the new name of the restaurant, Fat Taco.

Shortly after, construction was underway and the owners, which happen to be the same owners as Birch and Wild Moose Saloon, got to work right away. “We decided that Coco Havana needed an update. We felt that it was time and we think that it will be a nice addition to downtown Hoboken,” co-owner Gary Yip tells Hoboken Girl. “Fat Taco is the culmination of a Mexican-inspired place that will be serving Mexican food but with a focus on birria tacos. They’re a popular food trend now in NJ.”

Another co-owner, Diane Fini, adds, “We want it to have a fun feel, but it’s going to be a Mexican experience first. From the quality of the food to the chef’s background, the way we went through multiple venues to experience how they do it. We tried to find the best that was out there, then make it our own.” 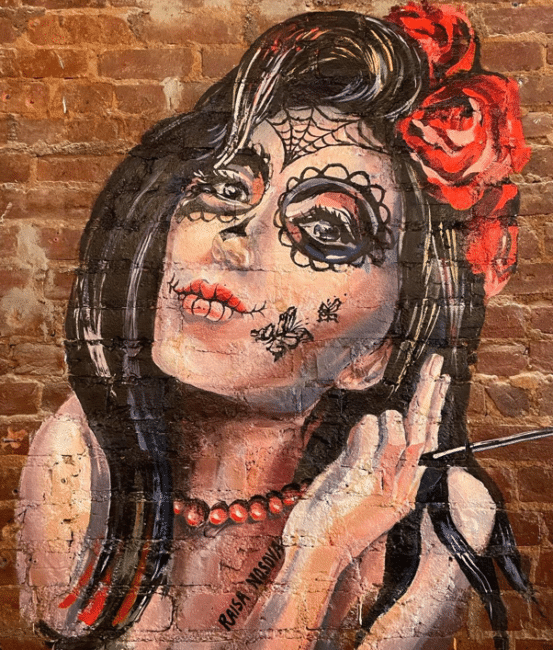 ^ One of the two Dia de Muertos murals by Raisa Nosova

Heading the kitchen is Chef Jason Herrera, who has been with Coco Havana/Coco Loco for seven years. He shares with Hoboken Girl how the menu, which focuses on birria tacos, came about.

“The idea was to have fun dishes out that are easy to make, very simple recipes, yet it’s very authentic. It’s what I’ve tasted in Mexican cuisine,” Herrera says.

We got a sneak peek at the menu, and if you dine in, expect to find various birria offerings — birria tacos, birria quesadilla, birria torta, and birria nachos. Herrera explains what exactly birria is: “Birria is made with lamb or goat in Mexico. It changed up when it was brought to the United States. Here we use a special blend of brisket and short rib. We cook it for seven hours… after the seven hours is over, the meat falls off the bone.”

There will also be various bowls to choose from like the chopped southwest salad, as well as large dishes (nacho mountain, giant birria quesadilla, street taco ring) to share with three to five people. To finish the meal with some sweets, the desserts offered are Churro Bites served with Nutella and vanilla ice cream, and the Fat Taco, which is strawberry ice-cream topped with cheesecake bites, fresh strawberries, strawberry jam, whipped cream, and graham cracker crumbs. This, we’re told, is going to be the big birthday dessert that’s going to become a favorite.

Herrera, who learned how to cook from his father who’s also a chef, says he created the menu with the drinks in mind since he wanted to make sure they were paired with the margaritas from the tequila bar. The cocktail menu is still being finalized, but Hoboken Girl got an exclusive look, and to be honest, all the cocktails are going to be very Instagrammable! Passion fruit cooler (made with volcan blanco, chinola, hibiscus flowers), palm tree punch (made with Casamigos, grand marnier, strawberry slices), la bruja (made with 1800 coconut, simple syrup, lime juice), and spicy Miami (made with tantao chipotle, agave nectar, pineapple juice) are a few tentative names of the delicious handcrafted drinks that will no doubt be enjoyed with friends. All the “Fun” Details of Fat Taco

The overall fun experience of Fat Taco is what the owners want customers to take away. We gathered some fun facts about the Mexican-inspired décor and features. See below: The grand opening date is September 11th. There will be live entertainment, dancers, stilt walkers, and more.

The tentative hours are Wednesday 4PM to 10PM, Thursday 4PM to 2AM, Friday 4PM to 3AM, Saturday 11AM to 3AM, and Sunday 11AM to 10PM. Fat Taco will be closed on Mondays and Tuesdays.

“We’re super excited. The feedback has been great,” Herrera says. “We wanted to just branch out and make it fun for everybody — that’s why we left [behind] the whole sit-down dining from Havana. This is more casual, more laid back.”

Stay in the know with Fat Taco via Instagram at @fattacohoboken.