There’s no denying the thick competition when it comes to picking the best burger in the Mile Square City. While we already have a hold on the more classic options, we thought it would be interesting to do a little research and nail down the more unchartered territory of burger heaven. Read on for unique burger choices in Hoboken. Foodies, especially our local vegans and vegetarians, love that Bareburger works with local farmers and artisans to deliver simplistic but creative and sustainable renditions of classic burgers, fries, and salads. Though the majority of Bareburger’s menu is pretty distinctive, we can’t help but give a special shout-out to the Blue Elk Burger, which features (surprise, surprise) an elk patty, Amish bleu cheese, black forest bacon, caramelized onions, and tomato fig jam all on a sprout bun. While it might not be for everyone, the Blue Elk certainly hits the spot for the more adventurous, game-meat-loving diners. Grand Vin has had no problem establishing its prominence on the Hoboken dining scene. The upscale but cozily rustic setting serves up a carefully selected wine and craft beer list, as well as an extensive menu of inspired takes on classic Italian dishes (we’re kind of obsessed with their fried Cajun calamari). Not surprisingly, Grand Vin also features an irresistible brunch menu, and while there is an array of house favorites to choose from, the Blackened Tuna Burger is one unique option that is just too hard to turn down. Seafood lovers will rejoice when indulging in the pan-seared tuna, which is served with avocado, chipotle mayo, and mixed greens on a seven-grain bun. And oh, it comes with a side of homemade truffle fries, because why not?

The Mac + Cheese Burger at The Ainsworth | 310 Sinatra Drive Speaking of Insta-worthy food, we definitely could not compile a list of the best burgers without making mention of The Ainsworth, which consistently delivers finger-licking goodness from brunch until dinnertime, along with spectacular skyline views while you dine. This full bar and restaurant, which also has locations in NYC and Vegas, features a loungey vibe and unique twists on some classic comfort food and drinks – think sweet tea wings, candied bacon, and frozen lemonade mules. And while the menu includes a number of unique burger choices, we’ve perpetually got our eye on the Mac + Cheese Burger, which features a juicy beef patty topped with perfectly crispy but somehow also creamy panko-crusted mac + cheese, all on a fresh sesame seed bun.

The Bohemian “Burger” at The Madison | 1316 Washington Street Don’t worry vegetarians — we haven’t completely neglected your need for a main-event-worthy burger every once in a while. Introducing the Bohemian Burger at Madison’s – a three bean quinoa veggie patty sandwiched between a brioche bun and covered in parmesan cheese, arugula, and cranberry aioli. Added bonus? You can find this item on the brunch, lunch, and dinner menu, along with a myriad of other classic American dishes and cocktails. 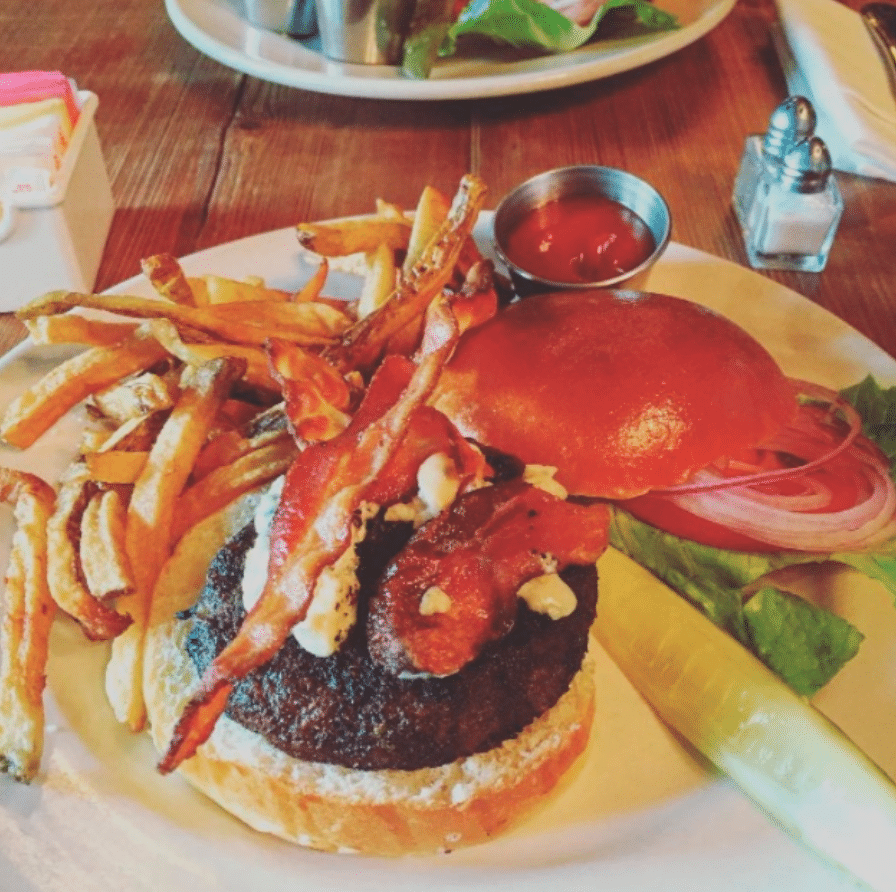 It might actually be a crime to talk about the best burgers in Hoboken and make no mention of Onieal’s, a staple Irish pub downtown that features an “everybody knows your name” kind of vibe and some astonishingly good eats. The only problem here is choosing what to order, especially when it comes to their extensive menu of melt-in-your-mouth burgers. While the Onieal’s Famous is your go-to if you’re looking for a more original burger, the Ragin’ Cajun is our top choice when we’re in the mood for something a bit more different. This Cajun spiced burger is smothered in jack cheese, crispy onions, and remoulade, and comes with a side of their famed house-made fries. Want to nix the kick? Onieal’s menu also includes some less spicy items that are equally delicious, as well as a veggie option and a laundry list of optional toppings for those who want to customize their burger experience.

The Breakfast Burger at The Shepherd + The Knucklehead |1313 Willow Avenue The Shep isn’t joking around when it calls its commitment to great beer “legendary.” Not only do they boast around 60 micro-brew taps at any given time, but it also feature wines by the glass, a fully stocked bar for cocktails, and a casual steakhouse-esque menu for brunch, lunch, and dinner. Diners (and drinkers) can choose from a variety of high-quality pub fare, including a number of half-pound Angus burgers that are all served with hand-cut fries. Our top choice for something different? We’re going with the already famous Breakfast Burger, which is topped with bacon, cheddar cheese, and a fried egg — because what other delicious combo would you expect on a breakfast burger?

SeeMore: The Best Spots for Avocado Toast in Hoboken

Tenth + Willow is much like the Madison in that there’s not much explaining to do. For years, this landmark establishment has been serving up “elevated pub grub” and a buzzing social scene that commences each weekend on Thursday evenings with half-priced martinis and culminates with a Sunday Funday that rivals the best brunches in town. Whether you’re downing martinis or mimosas, you’re bound to need some serious nourishment at some point, and the Burger Melt is the perfect option if you’re looking to switch it up. Sandwiched between freshly baked rye bread and topped with Swiss cheese and sautéed mushrooms and onions, this item offers up a refreshingly delicious twist on your classic patty melt. Okay, so the Arthur’s Burger is definitely not the most unique burger on our list (or even in town), but as with Onieal’s, you simply can’t compile a list of the best burgers without including Arthur’s. While this self-proclaimed “landmark” is most well-known for its perfectly-marbled, enormous steaks and to-die-for garlic bread, their burgers still come second-to-none. The “monstrous” Arthur’s Burger is a true classic, with freshly ground beef, lettuce, tomato, onion, and a side of fries.

Elizabeth is a middle and high school English teacher for special education and gifted students in downtown Manhattan. Prior to teaching, Elizabeth received her B.A. in English and Secondary Education from William Paterson University along with her M.F.A. in Creative Writing from The New School. She recently returned to Hoboken after a short-lived — but refreshing — hiatus in Jersey City. When she's not teaching, tutoring, or nannying through the summer, you can find her breaking a sweat at a variety of fitness studios in Hoboken and JC courtesy of an unrelenting addition to ClassPass or, naturally, overindulging at her favorite local bars and restaurants, with Onieal's and Southouse topping the list. She, like many other basic b's in the area, can never turn down a good eyebrow threading or a perfectly chilled glass of rosé.