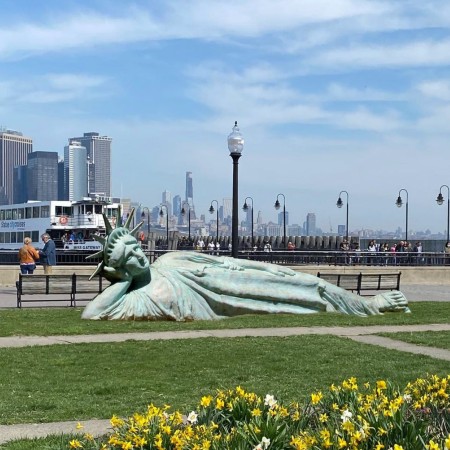 Zaq Landsberg is a Brooklyn-based artist who specializes in site-specific art installations and frequently produces things that look like other things. His work has been created in several international locations as well as across the US. He was approached in early 2021 by the Friends of Morningside Park and the Marcus Garvey Park Alliance to collaborate on an installation for a specific location inside the park. 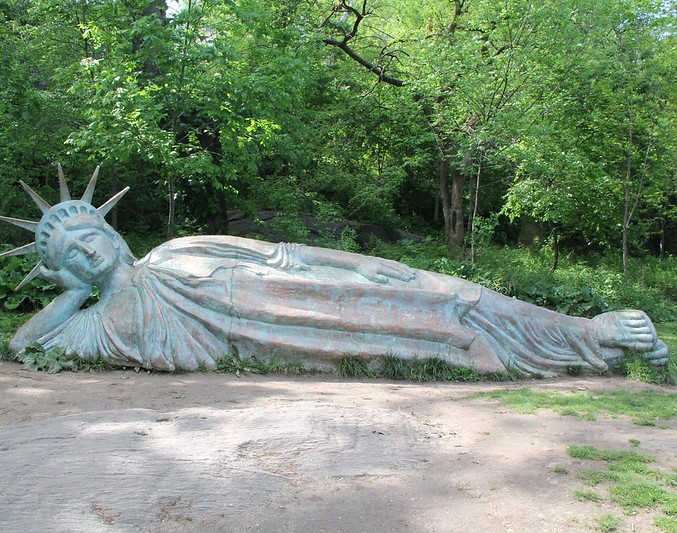 What he came up with was a 25-foot-long version of the Statue of Liberty, lying down in repose. In his artist statement, Zaq said that:

Reclining Liberty is a mashup of the Statue of Liberty and the giant reclining Buddha statues of Asia. The piece, coated in plaster resin, is sturdy enough to allow viewers to touch, climb, sit atop, lean up against the figure, and interact with the monument at a human level. Finished with copper paint and an oxidizing acid, the patina mimics the actual Statue of Liberty. 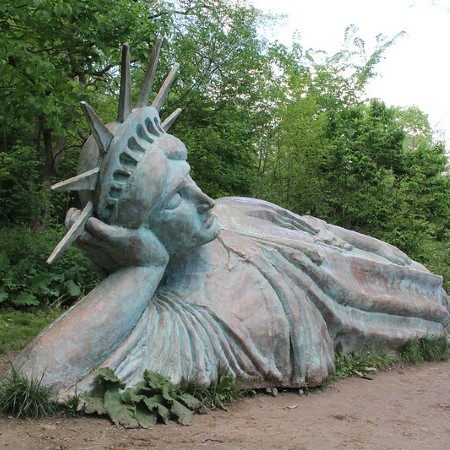 The pose of the Buddha lying down is not just about death but is an illustration of one stage on the path to enlightenment. By merging the traditional Buddhist reclining pose and the quintessential American figurative symbol, Reclining Liberty asks the viewer to contemplate the status of the ideals the Statue of Liberty represents. Is the U.S. as an entity forever upright and tall, is it an eventual decline and fall, or is there another stage for the country that will transcend this symbol altogether? After all the events of 2020, and the unmooring of pretty much every American institution, this question is not just theoretical. Monuments are where the historical, the political, and the aesthetic meet.

The statue was brought into the park in pieces and assembled on-site. The location that the group had selected was long and thin — and also at a spot where several paths converged in the park. It was officially unveiled to the public on April 25th, 2021. Zaq knew when he installed the sculpture that it would not be permanently located in the park, as public art in NYC parks is limited to one year. For the year Reclining Liberty was in Morningside Park, Zaq regularly visited to do touch-ups and watch people interacting with the sculpture.

Zaq said that watching people interact with the sculpture was a highlight of the experience for him. “Making art is a lot of solo work, so to see people climbing on the sculpture, taking selfies with it, having picnics near it, was really special. There was an incredible scope of how people have interacted with it, showing how connected they feel with it,” he said. “People really loved it. I saw a little girl’s birthday party near the statue, one of the artists in the neighborhood organized an art festival to take place near the statue, and one group of people even held a Buddhist funeral rite near the statue.” The statue was also the site of several interviews for Zaq, and people would frequently want to talk to him or take a picture with him. “I was truly taken aback,” he said. “This is the most popular piece I’ve ever made. Most of the time I put something up in a park and a few of my friends see it, but now so many people have seen my work.” Zaq also said that watching the seasons change around the statue was a special experience. “To see the statue with the fall colors behind it, and then later on covered in snow was memorable.”

In describing the sculpture itself, Zaq said, “[It’s] the color that you know instinctively. It’s in the grass, there’s no pedestal, no barrier to access the sculpture. Actual lady liberty is literally and figuratively above you: you can’t reach or touch it. But this one you can climb on it and interact with it,” he said. This accessibility is a big aspect of what makes this sculpture so special.

As Reclining Liberty’s year in Morningside Park was coming to an end, Zaq was approached by the Exchange Place Alliance and Liberty State Park about moving the statue to New Jersey. He was excited about the idea that the statue would go somewhere else for a year, and especially about what it would mean to be in LSP. “At this location, there’s a tie in to the immigrant experience between Ellis Island and the current diversity of Jersey City,” he said. “People fly over Liberty while on planes over the Hudson River. Now, it’s been recontextualized. Yes, it’s a tourist destination, but both Jersey City and this location are real places with real history. Everyone can touch and access it.”

See More: Where to Buy Wall Art in Hoboken + Jersey City to Elevate Your Home

Once the decision was made to move Reclining Liberty to Liberty State Park, Zaq had to figure out exactly how to pull it off. Between finding the right kind of crew to do the work and keeping an eye out for dry weather, it was not simple. “There’s not a service that specializes in moving reclining statues of liberty,” he said. Since Zaq had built Reclining Liberty inside Morningside Park, he didn’t want to disassemble it. “It was brought into Morningside Park in pieces, and I wanted it to be moved in its complete state,” he said. “I didn’t know how that would go, especially because we hadn’t been able to look underneath it for a year and weren’t sure what condition the material was in.” He also mentioned that coordinating the requirements for the parks departments and traffic offices of different jurisdictions, New York and New Jersey, was an added challenge. 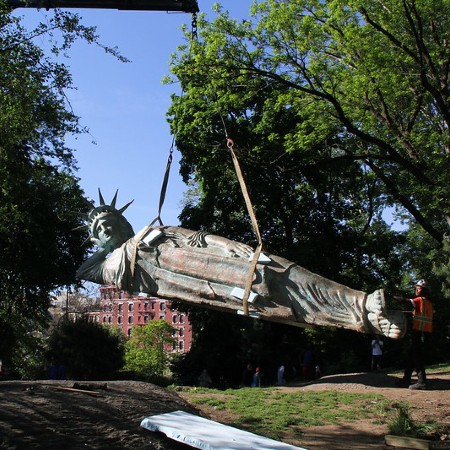 On May 18th, a rigging crew drove its crane into Morningside Park, and in what had to have been a mesmerizing sight, lifted the statue above the tree canopy to load it onto a flatbed truck. The 2,000-pound sculpture was then driven to Liberty State Park where they did the same operation in reverse. Zaq said the operation started at 7:30AM and was completed by 12PM on the same day. Once the statue was situated at LSP, he and his team inspected it for damage and made a plan for repairs and refreshing it.

“None of the damage was from the move, it was all from being outdoors and exposed to the weather for a year,” he said. “And since the whole point is for people to climb on it and interact with it, there was additional wear from that.” Zaq and his team have spent the first few days of being in Reclining Liberty’s new home doing repairs and, in particular, repainting the signature patinated green finish. The incredible heat of the first weekend presented a challenge, but as Zaq said, “We’ve been working on this for over a year, a lot of it is trial and error to figure out what works.” 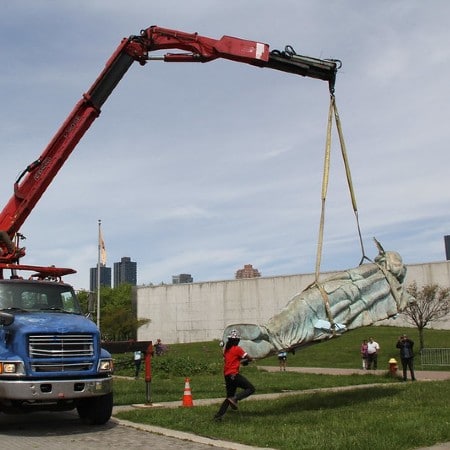 Perhaps most importantly, the team added a glossy sealant to protect the finish. During Reclining Liberty’s time in Morningside Park, Zaq learned that the patina needed to be better protected. “The patina had worn off, through the primer and down to the actual plaster, because of all of the climbing,” he said. Since being able to interact with the statute in that playful, accessible way is so important to the overall piece, he wanted to seal everything in.

Now that Reclining Liberty is a New Jersey resident, visitors are welcome to spend some time with it. There’s something special about standing eye-to-eye with this version while the original version is in the background. Zaq says that even though there are big ideas in the concepts behind his art, the way they are expressed makes it easy to access. “Even kids can understand it,” he says of the climbable piece. Zaq is now working on a permanent version of Reclining Liberty that will be in Staten Island.