All About Brazilian Restaurant Tamborim Bar + Grill in Jersey City

There’s a colorful, vibrant, and delicious restaurant on Newark Avenue in Jersey City called Tamborim Bar & Grill. Located just steps from the Grove Street PATH Station, this Brazilian restaurant was opened in 2020 by Jersey City restaurateur Michael Casalinho. Michael is also the owner of Broa in downtown Jersey City, which is currently closed and was last said to be moving locations, as well as Eira Mercearia. Located at 130 Newark Avenue, Tamborim is the only Brazilian restaurant in JC and is worth the visit for it unique food and bold flavors. Read on for an inside look into Tamborim Bar & Grill. 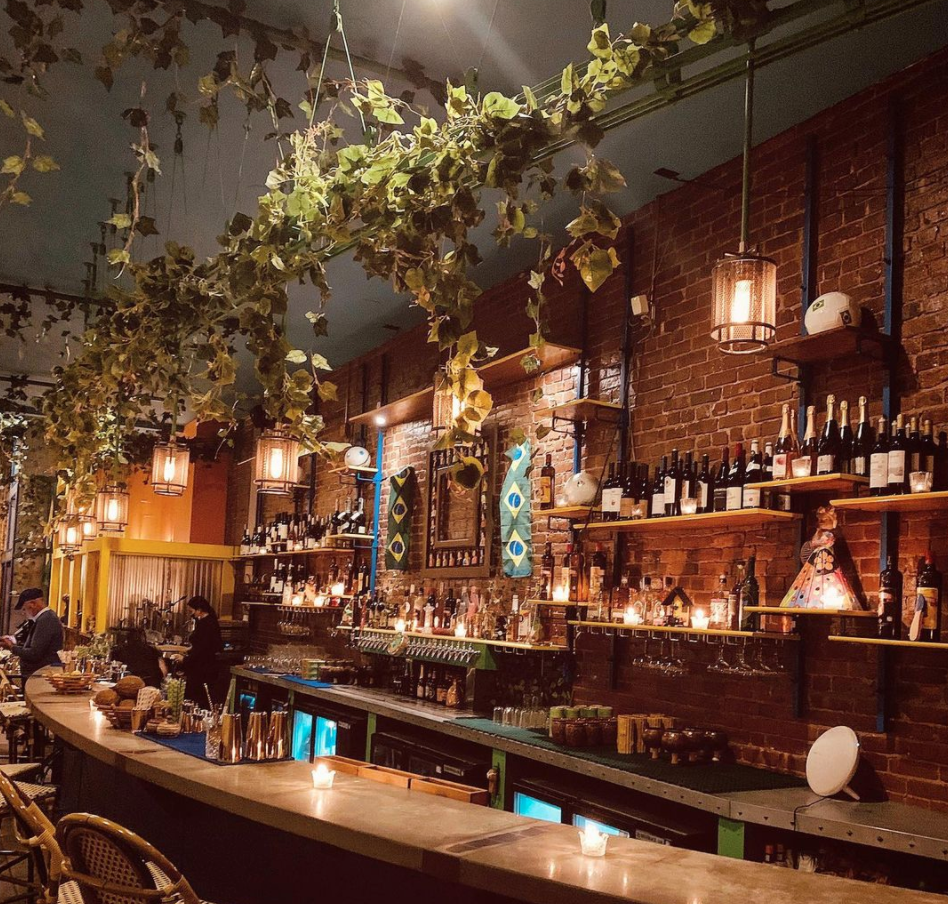 Tamborim Bar & Grill opened in December 2020 and is the first and only Brazilian restaurant in Jersey City. Located right on the pedestrian plaza strip of Newark Avenue, the restaurant concept, menu, interior, and overall vibe were developed by Michael with the heart of Brazil in mind. Tamborim Bar & Grill has indoor and outdoor seating options. HG inside scoop: Prior to diving into this project, Michael had been working on renovating and preparing a small space across from City Hall in Jersey City. The cafe, Eira, offers Portuguese baked goods and pastries, and opened in early 2021. In early history, Brazil was a colony of Portugal. The countries still have much in common culturally: sharing the same language, using similar flavors, drinking similar wines and spirits, and more. For years, Michael, who is Portuguese and owns a Portuguese restaurant, had wanted to open a Brazilian restaurant that pays homage to all regions of the country. While he isn’t Brazilian, Michael became somewhat obsessed with learning more about Brazilian culture and cuisine. Brazil doesn’t only have Portuguese influences, but also Irish, English, and African as well, making the food and culture especially diverse.

“Often, when you visit a Brazilian restaurant, you are only experiencing one taste of Brazil from one specific, popular region that people’s palates are familiar with now,” Michael explained.

Michael and his team at Broa had previously introduced more Brazilian-inspired flavors and dishes to their menu to do some consumer research and to showcase their passion for the different, regional styles they’re experimenting with. While Newark is home to many popular Brazilian restaurants, Michael was thrilled to bring his long-imagined concept fully to life in Jersey City.

The word “Tamborim” is Portuguese and translates to ‘tambourine’ in English. The tambourine is a Brazilian drum of Portuguese and African origin, making it a perfectly curated name for this new Brazilian experience downtown. The atmosphere is lively and bold, just like the instrument. The interior is meant to somewhat mimic Broa’s vibe, but stepped up a notch. With a full bar, more seating, and a unique interior structure, Tamborim Bar & Grill strikes a luxe yet fun feel. We’re coining the vibe “Brazilian concrete jungle.” Brazil is also well represented by the colors used throughout the space. The menu at Tamborim Bar & Grill brings in flavors from all over Brazil, which is the 5th largest country in the world by area. Michael told Hoboken Girl that he’s added items on the menu that have never been seen in Jersey City, let alone New Jersey, let alone the United States.

While there are recognizable Brazilian staples on the menu, some of the ingredients and preparations are so local to Brazilian regions that the recipes were brought to the table by the kitchen staff from those regions. Just like the staff at Broa was Portuguese, the staff at Tamborim are Brazilian. Michael joked, but was also serious when he said that “some items on the menu, Brazilian people may not even recognize because they weren’t from that part of Brazil.” He and his team in the kitchen, many of whom have been cooking in Brazil for 30+ years, have worked passionately to curate the menu and plating to absolute perfection.

See More: Samba: A Taste of Brazil in Montclair

The restaurant aims to introduce flavors that guests’ palates may not have experienced before. Michael confessed, “I love what I do, I love this business and industry, and wouldn’t do anything else in the world. I want to showcase Brazilian food in the very best way possible and really represent.” In addition to delicious food, the restaurant also has an impressive array of Brazilian wines, beers, and inspired cocktails. The team brought in a Sommelier and Mixologist to ensure that patrons are just as thrilled with the beverage service as they are with the food.

Follow the restaurant on Instagram @tamborim_bar to see what’s cooking in the kitchen and getting served up at the bar.