If you love strolling Jersey City’s Newark Avenue {that is currently free of cars}, you’re going to be thrilled: Jersey City is making way for more pedestrians. The pedestrian plaza, which runs up Jersey Avenue and Bay Street, between Erie and Newark, underwent an expansion project this week that intends to shift the focus to Jersey City’s foot traffic, rather than its car traffic. Read more about it below: Though the expansion plan has already broken ground, it exists on a larger scale, with plans extending all the way into the fall. Jersey City Mayor Steven Fulop revealed on Instagram that later this year, more will be done to the pedestrian plaza. “This week we expanded the pedestrian plaza on Newark Ave and later this year, we will resurface it with formal plaza pavers and raise the street,” Mayor Fulop wrote.

With the expansion comes an anticipated increase in foot traffic and so Jersey City officials are taking precautions to ensure the safety of pedestrians. Some of these precautions include potentially limiting rooftop hours, meaning that rooftops will likely soon be governed much like patio seating on Newark — anything that constitutes as an outdoor activity must end by midnight. 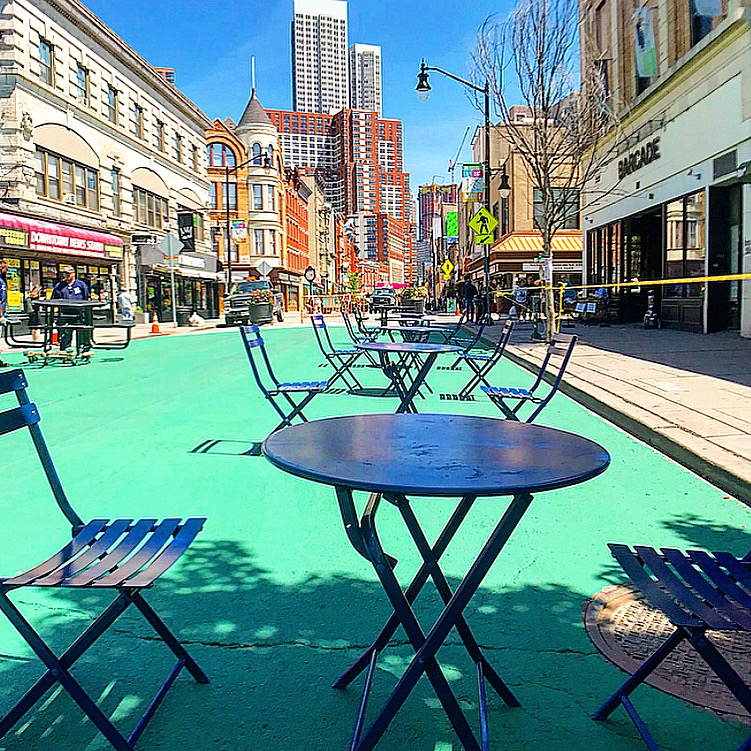 “I believe the pedestrian mall has the potential to become a world-class public space, enjoyed by the entire city and a pleasant place at all hours,” Downtown Councilman James Solomon told ChicPeaJC. “In the near future, the city will pilot an expansion of the Newark Ave. pedestrian mall, closing Newark Ave. between Erie St. and Jersey Ave. My recommendation to the administration is to conduct community meetings prior to commencing the pilot,” Solomon added.

Another new ordinance expected to protect pedestrians is the proposal of limited re-entry. To ensure that not all pedestrians are leaving the bars and restaurants at once, a no re-entry after 1:00AM policy is expected to “stagger” pedestrian “departures. The expansion also brings an uptick in creativity along with it. After all, the more room for pedestrians, the more space there is for street murals. Los Angeles artist Nate Frizzell has been commissioned to work on a mural along the Newark Avenue Pedestrian Mall — which has been coming together as of this week {when it’s not raining!}.

And now, the rain… photo by @jackbandet

The mural features a close-up of a woman’s face against a black, circular background. The woman wears pink flowers in her hair and a pair of antlers on her head. Since Day 1, Nate has been uploading step-by-step photos of the mural process, detailing his progress in both picture form and in the captions.

“Day 1. Don’t judge me for the slow start… I’ve never painted an eyeball bigger than my head,” Nate wrote on Instagram.

Day 1. Don't judge me for the slow start…I've never painted an eyeball bigger than my head

What are your thoughts on the pedestrian expansion in Jersey City? Tell us in the comments below!