Home Culture A Hoboken Walking Tour: A Literal Step Into The Mile Square’s Past

A Hoboken Walking Tour: A Literal Step Into The Mile Square’s Past

The Mile Square City’s history is told through its architecture, and believe it or not, Hoboken is fortunate to have several listings on the National Historic Register. Of course, a quick walking tour of those listings was due to discovering the rich history Hoboken has to offer. Read on to find out more about the historic buildings + step into the past with the Hoboken National Historic Register Walking Tour.

Editor’s Note: listings with an Asterix (33%) are all thanks to Hoboken Girl Martha Bayard Dod Stevens). Designed by architect Kenneth M. Murchison in the Beaux-Arts style, the rail and ferry terminal buildings were constructed in 1907 by the Delaware, Lackawanna, and Western Railroad, with extensive renovations that were completed in 2011. The large main waiting room with floral and Greek Revival motifs in tiled stained glass by Louis Comfort Tiffany is generally considered one of the finest in the United States. A grand double stair with decorative cast-iron railings within the main waiting room provides an entrance to the upper-level ferry concourse. The terminal exterior extends to over four stories and has a distinguished copper-clad façade with ornate detailing and its single-story base is constructed of rusticated Indiana limestone.

The 225-foot clock tower was originally built with the terminal over a century ago but was dismantled in the early 1950s due to structural damage and deterioration from the weather. A new clock tower, replicating the original, was constructed during the terminal’s centennial year of 2007. The original ferry slips inside the historic terminal were also restored in 2011 and the terminal is considered a milestone in American transportation development, combining rail, ferry, subway, streetcar {buses and light-rail were added later}, and pedestrian facilities in one of the most innovative designed and engineered structures in the nation. Designed by Charles Fall and built by Myles Tierney in 1889, the Victorian masonry building housed the offices of the Stevens family real estate holding corporation, the Hoboken Land + Improvement Company, much of which was overseen by local matriarch Martha Bayard Dod Stevens. 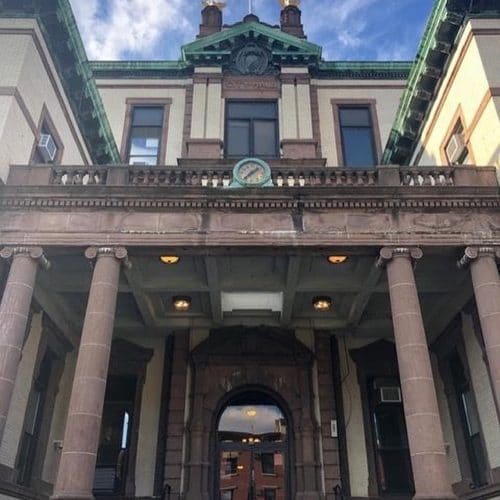 This Second Empire-style building was designed by prolific architect Francis G. Himmler and was built in 1883 with several additions over the years. Those modifications altered the building into a more Beaux Art Classicism style. Many of the special details within the building are behind closed doors but special tours can be arranged for the curious. Ask for the informative and enthusiastic Jerry Lore when touring. This neo-classical bank was built in 1912. The original trust company failed during the Great Depression and the building was passed on to a succession of owners. The building was constructed using granite and brick, and much of the original plaster interior remains intact and recently underwent a renovation into luxury condos. A beautiful example of 1915 Gothic and Romanesque Revival architecture. Formerly the Congregation Star of Israel, it is among the oldest synagogues in New Jersey and was closed for two decades before being reopened in 1989. The firehouse was designed by Fagan + Briscoe and was built in 1915. The firehouse serves as the headquarters for the Hoboken Fire Department but houses no fire companies. This simple firehouse was designed in 1870 by German architect Francis G. Himpler, the same architect as City Hall, Our Lady of Grace, and Hoboken Fire Department Museum. Currently, it is a private residential space. Built in 1870 by Francis G. Himpler, this space is a former 19th-century firehouse with a 1932 old-school fire truck on display, along with historic Hoboken artifacts, pictures, and treasures. It is the primary part of the Hoboken Firehouses and Firemen’s Monument. The Keuffel and Esser Company, also known as K + E, was a drafting instrument and supplies company founded in 1867 by two German immigrants, William J. D. Keuffel and Herman Esser. It was the first American company to specialize in these products. This listing includes both former factories located side by side on 3rd Street. Another Hoboken structure designed by the prolific architect Francis G. Himpler with William J. Whyte, The Church of Our Lady of Grace is a Gothic-style Roman Catholic church was built in 1874. The copper roof firehouse was designed by Fall + Mason and was built in 1898. This is also the firehouse where Frank Sinatra’s father, Martin, was a Captain. It is part of the Hoboken Firehouses and Firemen’s Monument. Designed by Richard Upjohn and built in 1870. The building was named after Edwin Augustus Stevens and used as the main building for the Stevens Institute of Technology. The renowned DeBaun Auditorium is located in this building and the building is currently used as the Charles V. Schaefer, Jr. School of Engineering and Science. In 1896 Martha Bayard Dod Stevens delivered a deed conveying the site for the new library after the town of Hoboken voted to open one and outgrew the basement of the Second National Bank Building {originally located at 71 River Street}. Designed by local Hoboken architect Albert Beyer, the dome remains a prominent feature of Church Square and the building retains its classical stone and brick façade, ornate cornice, and terracotta urns. Inside, the original decorative ceilings, woodwork, and metal staircase remain. The firehouse was designed by Charles Fall and built in 1892 and is part of the Hoboken Firehouses and Firemen’s Monument. Completed in 1874 to the designs of Edward Tuckerman Potter and Henry Vaughan. The choir was added in 1913, the baptistery in 1932. Martha Bayard Dod Stevens commissioned the church in remembrance of her daughter Julia Augusta, who died tragically at age seven from Typhoid fever in 1870. An Episcopal Church, historically it was free without pew fees and served the less fortunate, immigrant arrivals in town. The religious and cultural life of Hoboken has run broad and full from the beginning. As the population grew and persons of varied nationalities came to reside in the area, so also grew the necessity of providing facilities to care for the spiritual needs of the people. Saint Ann’s was erected in May 1900 to administer to the growing Italian-speaking population. The firehouse was built in 1907 with a renovation in 2008, including a new sprinkler system, a steel-reinforced floor, a kitchen, and a physical training room. The firehouse currently houses Engine Company 3 and Rescue Company 1 of the Hoboken Fire Department. A beautiful Romanesque-style church built in 1890 by French, Dixon + DeSaldern of New York and was added to the National Register of Historic Places in 2006. Converted to The Raphael, the building was restored and reworked into a collection of beautiful and expansive custom-built homes. The developers have managed to perfectly complement this architecturally significant and historic property through juxtaposing modern interiors. This section of Washington Street occupies a full block length, was designed in 1890 by the architect Charles Fall, was and built by the Hoboken Land and Improvement Company. With 174 units, there are many town stories to be heard from this location and it was often a hot spot for campaigning politicians. A large fire in 2008 caused major damage to the complex but has since been repaired. 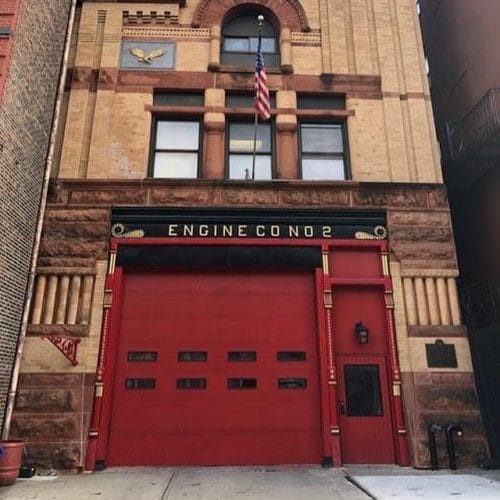 With land deeded by Hoboken Land + Trust, the firehouse was designed by French, Dixon + DeSaldern in the Romanesque Revival style and was built in 1890. The firehouse was restored outside and modernized inside after a severe fire occurred in the 1980s. The firehouse currently houses Engine Company 5 and Ladder Company 1 of the Hoboken Fire Department.

DWIs in Hoboken: A Chat With the Local Police Department

Jersey City’s Zombie Opera is Back for its 3rd Year