A week of life in Hoboken + Jersey City means there is plenty of news to catch up on. Among the local headlines: Jersey City to refund residents following massive tax overcharge, Lepore’s Chocolates in Hoboken celebrates 41st birthday, new restaurant ‘Cilantro’ brings diverse menu to Jersey City, and so much more. Keep reading for all the news you missed this week in Hoboken, Jersey City, + beyond.

One of Hoboken’s most beloved Halloween traditions is back this year. Due to COVID-19 last year’s parade was canceled but this year, the Hoboken Ragamuffin Halloween Parade is back on Washington Street on Sunday, October 31st at 11AM.  Click here to read more about this year’s Halloween event in Hoboken. To commemorate the season’s beauty and living locally, Hoboken Girl readers are invited to join Hoboken Girl’s 7th Annual Fall Instagram PhotoContest, #FallinLovewithHoboken. This is your month to enter and win amazing prizes from 12 local businesses by posting your favorite things about Hoboken and Jersey City in the fall on Instagram. Click here to read all about our fall photo contest, how to enter, and some past inspo to #FallinLoveWithHoboken. Hobokenites will be saddened to learn that longstanding and loved bakery, Giorgio’s Pasticceria, located at 1112 Washington Street, has been listed for sale and has now been sold. The bakery made its name in the 1970s when it first opened its doors in the Milesquare. Click here to read what we know about Giorgio’s closing its doors in Hoboken. Sol Spirit Yoga & Wellness Studio has officially opened in The Heights. Located at 523 Palisade Avenue in Jersey City, Sol Spirit touts itself as a welcoming space for both yogis and newbies who want to meditate, practice, and find balance of the body, mind, and spirit. Click here to read all about Sol Spirit, the new yoga studio in Jersey City. 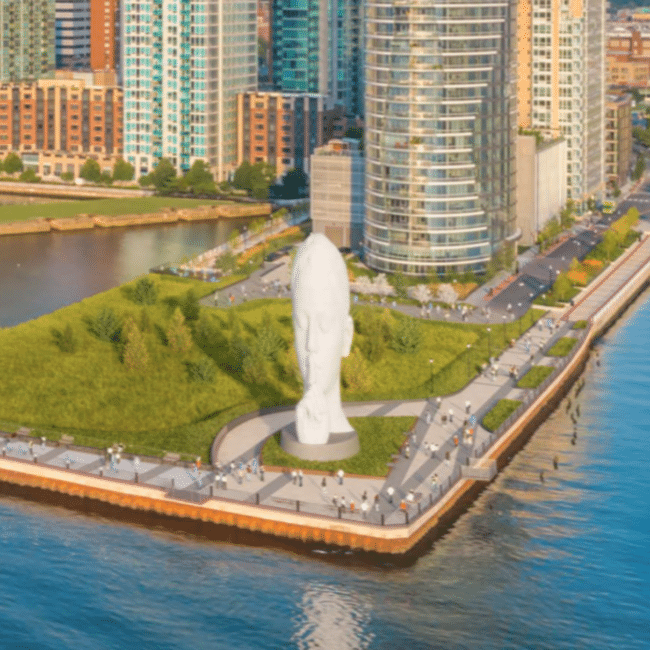 If you’ve been near the Jersey City waterfront of late, you may have noticed a giant sculpture being assembled – it’s kind of hard to miss. Hoboken Girl Readers have been asking what the story behind it is, so we did some digging. The 80 feet tall sculpture in question is called Water’s Soul created by internationally famous artist Jaume Plensa. The permanent fixture in Newport was dedicated this week in an official unveiling and dedication ceremony. Click here to read what we know about the sculpture and the artist.

On Friday, October 29th the plant shop PLNTD will host a ribbon cutting ceremony at its new Jersey City location. The ceremony will begin at 11:30AM and is open to the community and launches the start to a weekend of giveaways. The shop is located at 16 Erie Street in Jersey City.

On Saturday, October 23rd Rock-It Docket reported that $5k worth of sound equipment was stolen from a U-haul during a music festival that night. Specifically a Behringer X32 in a soft case, a lighting mixer and iPad in a hard case, a Shure 52A, and two Shure 58s. The event planner alleges this was done by someone familiar with the event and location. Attain Med Spa has launched a new line of medical-grade private label skincare products. Members receive a customized skincare treatment plan based on the findings of a personalized skin analysis. This is the first skincare membership of its kind for pre-teens and teens. Attain Med Spa is located at 720 Monroe Street in the Monroe Center in Hoboken. A new home goods and gifts shop, Living Room, officially opened yesterday on Saturday, October 23rd. The announcement came via Instagram, saying, “Jersey City you ready?! We’re opening our doors Saturday, October 23rd. Come visit us at 277 Newark Avenue. Take a break and stroll through our shop with your partner, squad, kids or in your own power. We’ve got a little something for everyone (0 to 100), inclusively curated + intentionally sourced from brilliant creatives and vendors who represent our families and communities.”

Sarah Dash, the singer from Patti Labelle and The Bluebelles, was inducted into the New Jersey Hall of Fame on Saturday, according to NJ.com.  Before she passed away in September, her remarks and words of appreciation were recorded. The footage was shown at the virtual ceremony hosted by Danny DeVito.

NJ State Workers Have Begun Phased Return to the Office For the first time since the COVID-19 outbreak in March 2020, New Jersey state workers have started returning to the office full time, per NJ.com. Workers began to return on Monday, October 18th, and will continue to phase in over the next month. Positive cases of COVID-19 continued to drop this week in New Jersey, reported NJ.com. At the same time that 7 deaths and 903 cases were reported, the state and school districts began to enforce vaccines for workers. If unvaccinated, workers will undergo COVID-19 testing once or twice a week. As the Rebuild by Design project continues in Hoboken, residents can expect to see multiple road closures, per Tap Into. Major storms, rainfall, and high tide necessitated this $230 million project in Hoboken. The article has full details on dates and times for specific street closures. Property owners will receive a tax refund on their next bill for an 800 percent overcharge in March 2021, according to Tap Into. City officials anticipated some errors as a result of the new arts and culture tax and are working to fix the issue promptly. The Jersey City Police Officers Benevolent Association has endorsed Gov. Murphy and Mayor Fulop for re-election, reported Hudson County View. Members of the Association have expressed appreciation for “restoring trust between law enforcement and the communities they serve.” This support comes ahead of the November 2nd elections. Lepore’s Chocolates is turning 41 this year. Since 1980, this local gem has served delicious, fresh, old-fashioned style sweets. So good, in fact, that Frank Sinatra used to send his limousine to pick up chocolate-covered apricots. The shop is open at 105 Fourth Street, between Washington and Bloomfield Streets. Click here to read more about the sweets shop and its impact in Hoboken.

Art lovers will be happy to know that Hoboken just unveiled a new mural – a big one. It depicts a historical Hoboken figure (can you guess who?) and is situated near the Hoboken path station. Famous international artist, Beau Stanton, is no stranger to Hudson County. With another mural in Jersey City, Beau has expanded his portfolio to Hoboken.

Before presenting a design to the City, he dove into research on the city of Hoboken and took note of the architecture that can be found in town. After landing on a design, the mural took a total of seven days to complete. Click here to read more about the mural and the artist. Jersey City is welcoming even more delicious eats at a new restaurant, Cilantro, reported Jersey Digs. The restaurant, located across the street from Brennan Courthouse, will feature many menu items from pastries and all-day breakfast to black bean chili and Irish nachos. The restaurant is located at 564 Newark Avenue in Jersey City and will be open from 7AM to 1AM every day. Robert “Bobby” Helmeck passed away this week, according to Patch. Recognized for his tall stature and long beard, he was also known in the community as “Hoboken Jesus”. The funeral service was held at Our Lady of Grace Church on Thursday, October 21st. Bobby spent most of his life outdoors having spent the last 40 years homeless in Hoboken. Actor Billy Eichner is filming his newest romantic comedy in Jersey City this week, according to Jersey Digs. The crew set up production in The Village neighborhood Wednesday and Thursday, which will be the second local area Eichner has used for ‘Bros.’ Universal Studios described the film as the first romantic comedy from a major studio featuring two gay men.

The 2nd Annual Bergen Square Day will be returning on Saturday, October 23rd from 12PM to 5PM, per NJ.com.  This autumn celebration of history and culture will feature live music, entertainment, and food vendors. The event will also include the Annual Bergen Apple Fest.

Rabble and Lion Coffee is opening a brick-and-mortar location in Jersey City at 156 Brunswick Street. Until the grand opening, the specialty coffee shop will have products and beverages available at local farmers’ market including markets at Hamilton Park and Van Vorst Park.

Jersey City’s partnership with AeroFarms is well underway, with the first of 10 vertical farms complete. Mayor Fulop shared more information about the innovative farming technique via Instagram this week.

The post reads, “This is exciting. We started this week constructing our 10 vertical farms in #JerseyCity in our partnership with AeroFarms, the world leader in vertical farming. This farm in one of the farms in housing sites as part of a program we are doing around education for a healthy diet + better food accessibility. The main goal is to get people excited about eating vegetables. Our effort here will improve people’s (especially young kids) lives by improving their health.”

The vertical farm pictured above will produce 550 pounds of food, which equates to about 2200 servings.

The Hoboken Homeless Shelter is hosting this year’s HoBOOken 5K Halloween run on Saturday, October 30th. This is one way the shelter has worked towards ending hunger and homelessness in the area. Race information and registration can be found on the HoBOOken 5K website. Children also have the option of participating in the run through a virtual format.

Emma’s JC, a Southern-inspired, locally-grown eatery that brings “comfort food to the heart of Journal Square” is introducing new menu items this week according to Instagram. A few of the new additions include cast-iron mac and cheese, Emma’s Naught Nachos, and the Journal Square Burger.

The Robbins Reef Lighthouse in the Upper New York Bay might become a bed and breakfast. The lighthouse would host a one-of-a-kind overnight space, according to @jerseyphotographer. Originally opened in 1839, the lighthouse was automated in 1966. Cheryl Fallick, the long-time housing advocate in Hoboken and current City Council candidate, called on the mayor to restore the defunded rent leveling office, according to Patch. After local government defunded the office last year,  issues have been raised regarding housing justice in the area, which Fallick says, increases the risk of losing economic diversity.