We are deep into fall now with winter + the holidays quickly approaching – which means it’s the last time to enjoy the mild autumn while it’s still here. Nothing says cooler evenings and autumn weather like a fall cocktail. Whether it’s apple cider-based, packed with pumpkin, or a festive spritz, we’re loving the cocktails that these local Hoboken and Jersey City restaurants and bars have created before the season is over. Read on to find where to find festive fall cocktails in Hoboken + Jersey City.

With a full bar of crafted cocktails, some of which have earned it the title of Hoboken Girl’s ‘Best of 2021’ cocktail award, you really can’t go wrong at Antique Bar & Bakery. There are so many incredible drinks on this menu as it is, but there are some extra special fall drinks that just debuted. For one, there’s a Pumpkin Espresso Martini made with a puree that’s fresh out of the pumpkin. There’s also a Cinnamon Girl drink — which is Prosecco served with blueberry puree, Madagascar vanilla bean, ginger, cinnamon, clove, and cardamom to hit on all the aromatic fall flavors that we love. This one just debuted on October 6th, and we cannot wait to try it. A few other fall drinks will be added to the menu soon — like a smokey/chili salted caramel drink served with dark rum. Yum. We all know The Brass Rail has some stellar brunch deals, of course — but it also serves up some awesome fall cocktails. On the menu is a Fall Spiced Mule — which is made with bourbon, lemon, cider, and topped with ginger ale. Plus, it comes in the essential copper mug with some extra fall spices. We don’t know what’s more comforting or autumnal than that. While Grand Vin is known for its wine, the cocktails are pretty delicious, too. The ambiance is inviting, especially in the fall. There’s a wonderful selection of food and the cocktails are the perfect complement to the upcoming colder days ahead. When it comes to fall cocktails, there are a couple to try out this year. There’s the Dark Side of Manhattan for one (pictured above) — it’s served with Bulleit bourbon, Mr. Black cold brew coffee liqueur, sweet vermouth, bitters, and a little chili and nutmeg. This drink is as warming as it is the ideal pick-me-up, and it pairs well with the crisp air if you’re dining outdoors. There’s also the Hazed + Confused drink, which is served with vodka, hazelnut liqueur, maple syrup, brandy, cinnamon, nutmeg, orange juice, and lemon juice.

Read More: Bars in the Montclair Area to Visit Based on Your Drink Preference

We all know that the colder weather means the right time of year to warm up with some bourbon. This November, Halifax just released its selection of bourbon called ‘The Kingfisher.’ Diners can get this bourbon in a Kingfisher Old Fashioned or a Kingfisher Manhattan — and both come with bitters and maraschino cherries. For a different route, Halifax also serves up a  Fall Spritz, which includes Chandon Garden, apple cider, and mulling spices. Last year, Northern Soul served a witchy drink just in time for Halloween — but it may have something even better for 2022. Northern Soul just debuted its Figgie Smalls drink — and we could not be more stoked. It’s served with Ovo Vodka, apple cider, fig, basil, lemon juice, and maple syrup. It’s basically fall in a glass. 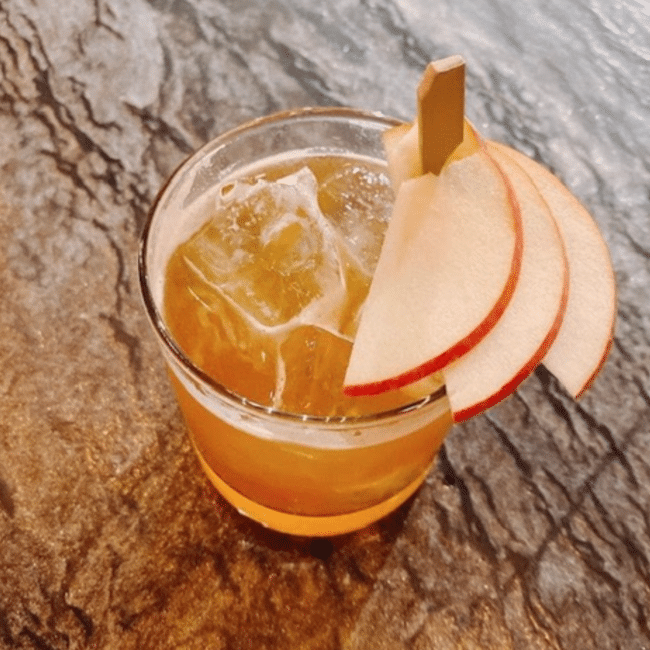 Sirenetta’s menu features an extensive raw bar selection with a variety of innovative seafood entrees and boasts a fancy cocktail selection. Autumn will most likely bring some new cocktails to this beloved local spot, but the “Orchard Mule” is sticking around again for the 2022 season. Pictured above is Sirenetta’s fall take on a mule, which includes vodka, apple, cinnamon, lemon, and ginger beer. This is a great addition to your fall bucket list. This American restaurant has modern vibes, great views, and some really fun fall cocktails on the menu — so you can choose which fall flavors you want to experience. Up first is the Aper-Fall Spritz (we love a good pun), which comes with Aperol, a French apple liqueur, and Bubbly. Another great option is the Wet Your Beak, which comes with ginger whiskey, apple cider, and lemon. Finally, coming in hot with another fun pun is the Un-Fig-Gettable with Fig liqueur, fig vodka, honey, and thyme. You can also try out the Maple Manhattan at this spot, pictured above.

See More: Where to Get Pumpkin Beers in Hoboken + Jersey City

Cellar 335 is definitely known for its fun drinks — and not just for the way they taste, but also the fun ways they’re served. Pictured above is the Bewitched Captain, in keeping with the nautical/tropical theme of the rest of the cocktails but with its own fall twist. It’s served with bilberry gin, Akvavit midwinter, spiced pear, mango, orgeat, cinnamon, lemon, and bitters. Plus, the ‘bewitched’ aspect adds a fun Halloween spookiness to it for extra spice. Nerdy Bartender Things – the name of this cocktail that’s a menu staple at Franklin Social in Jersey City. This is a local favorite drink, and it will help boost you into that fall mood. With Toki Japanese Whiskey, St. George Spiced Pear, Pear Shrub, pineapple, almond, lemon, and Angostura Bitters – this one’s a real treat. The JC spot is also known for having great, warm seasonal cocktails and heaters around the perimeter of the restaurant as the temperatures drop – so stay tuned.

With American cuisine in a warm and rustic setting, The Hutton is a great spot to enjoy a festive cocktail. When it comes to fall drinks, there are a couple options here. There’s the ‘Jersey Lightning,’ which comes with St. George’s Apple Brandy, Amaro, lemon juice, and Demerara syrup; or the Maple Bourbon Sour, which comes with Bulleit bourbon, fresh lemon, maple syrup, and rosemary. The number of fall + cold weather cocktails at South House is almost overwhelming. The team revamps the whole menu to match the change of the seasons, and there are some really fun winners on the menu this year. The Bad Apple cocktail is served with Ketel citron, green apple, lemon, simple syrup, white balsamic, and muddled arugula, for one. Then there’s the Drunken Pear, which comes with gin, poached pear puree, lemon, rosemary clove syrup, mint, and cracked pepper. Sweet Chai of Mine has Casamigos reposado, chai syrup, lemon, egg white, and cayenne sugar — while Pump Up the Jam has mezcal, rose aperitivo, lemon, cinnamon syrup, apricot jam, and dried rose buds. There’s also a Pumpkin Spice Mule. We told you — too many to pick!