Downtown Jersey City has too many new restaurants to count— from killer pizza at Razza to the Phillipino American gastropub, Talde. The one thing missing, however, was a cool bar with great beer and cider {not just your standard Angry Orchard} paired with eclectic bar food. Not to fear: Wurstbar Jersey City has answered our prayers. Coming from the same owners as the Pilsener Haus in Hoboken, Wurstbar Jersey City is a more intimate version of Pilsener Haus, focused on smaller craft breweries and limited beers usually unavailable in a large beer hall. We stopped in to grab a pint of beer and check out their newly expanded menu {especially the burgers}. Here’s the scoop on Wurstbar Jersey City: Half of the experience of Wurstbar Jersey City is the environment owner Aaron Kahn and his staff have cultivated. The large white marble bar is the focal point, with vintage décor from old butcher shops covering the walls and wooden small tables nestled next to them. Old wooden floors lead to larger format tables in the rear of the restaurant, giving a super cozy vibe. But don’t be fooled: Wurstbar Jersey City is more than just a bar—the unique space is ideal for an easy date night or dinner friends {+ the over-sized tables fit larger groups, and the bar and window seating is perfect for grabbing a drink and a bite solo}. Speaking of drinks, it’s no surprise the draft list is on point. Aaron worked at numerous breweries and craft beer distribution companies to create his menu, and he really knows his beer. As a licensed cicerone, he envisioned Wurstbar Jersey City as a more intimate version of Pilsener Haus, so he skipped the commercial European pilsners, lagers, and traditional German menu available at the sister spot in Hoboken. Wanting to educate his customers and encourage them to try beers they may not have heard of before, Aaron selected most beers based on unavailability {read: NOT readily available in most local bars}. 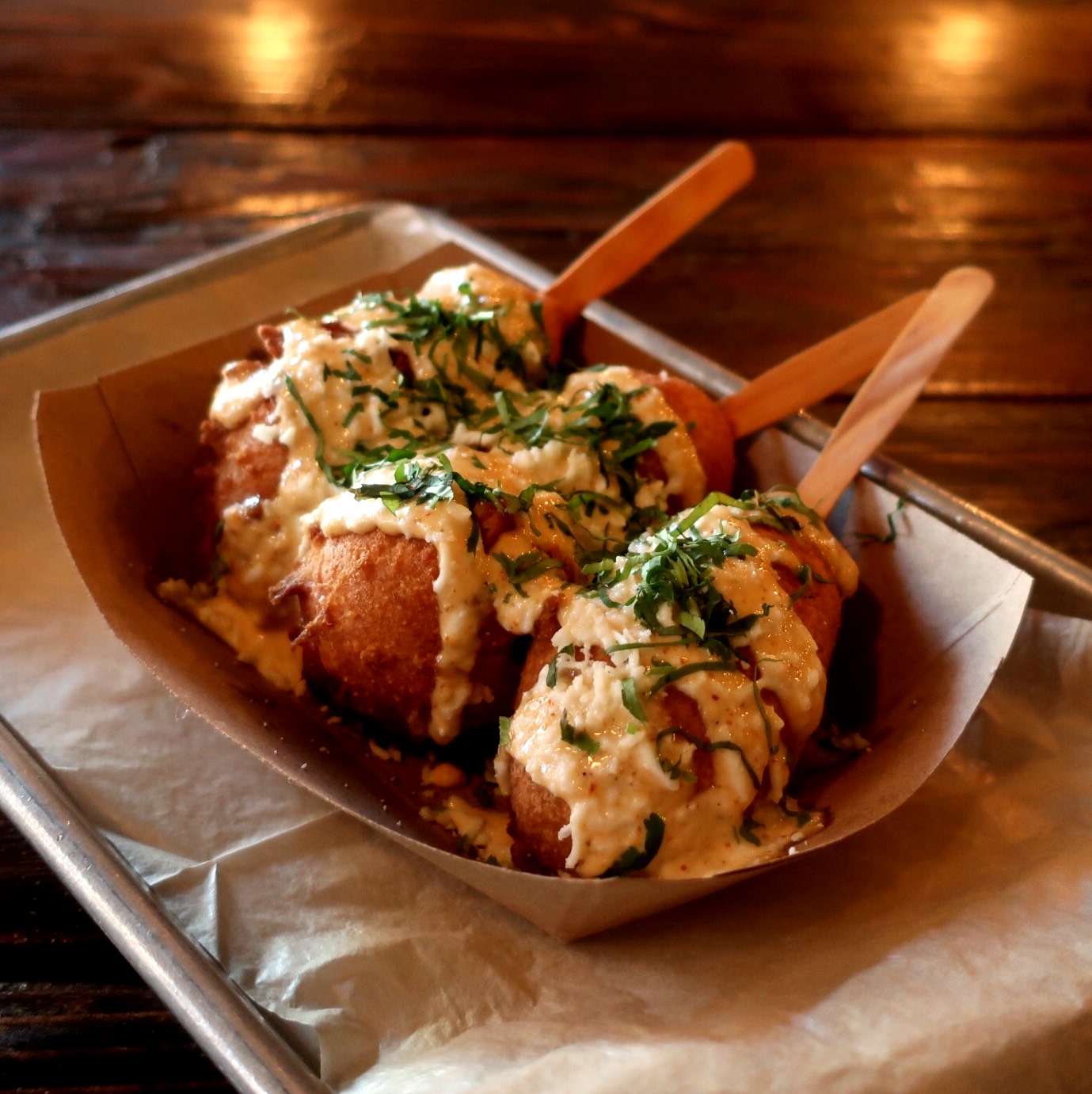 For the sour lovers: On the beer list is an extensive cider menu {40+ bottles on draft!}. And what, might you ask, goes really well with cider? Sausage — and you can find ten different varieties on the menu. The wide array of sausage came from Aaron’s idea that every culture and every ethnicity does a pretty unique version of sausage, so he wanted to push past the traditional German and Eastern European sausage and create new combinations. Expect to find everything from venison sausage to duck and chorizo, as well as the sausage plate. For $16, you get two sausages (brat, kielbasa, venison, chicken, duck, chorizo or lamb) served with traditional sides (think coleslaw and caramelized onions). It’s all fun and games until we get down to business and discuss the real reason we really came to Wurst: the burgers. These babies are made with Pat La Frieda ground beef {the butchers behind the Shake Shack burger and the Black Label Burger at Minetta Tavern to give you an idea}. And if you order the signature Haus Burger, the bun is actually four sweet Hawaiian slider buns {mini sliders, FTW}. If you aren’t feeling like burger, gourmet hot dogs {including “Pop Goes the Weiner”[lolz]— served with cheese sauce, jalapenos, and bacon or the “Picnic Table” — served with coleslaw, onion fizzle, and BBQ sauce}. Make sure to order a side of poutine fries such as the Banh Mi, topped with cheese curds, shredded pork, hoisin gravy, and Asian slaw or the Brotherly Love, topped with cheese curds, cheese sauce, philly steak, onions and sweet peppers. For the vegetarians, Wurstbar Jersey City offers veggie dogs, veggie burgers, and even veggie gravy for their poutine fries. #WIN. Chef Abe and Aaron’s experience traveling abroad really shaped the menu items. “We get inspired by local restaurants in Jersey City as well,” Aaron noted. He shared he has a great relationship with the Japanese restaurant Koro Koro {also located in Hoboken!}, and often the staff of Wurstbar Jersey City visits for lunch. One of the hotdogs on the menu, the samurai snack, drew inspiration from Koro Koro for its sriracha ginger sauce and the chunks of dried seaweed toppings.

If you love Wurstbar Jersey City as much as we did, you’ll be happy to hear there are plans to expand. Aaron and Chef Abe’s are looking to potentially open up multiple locations, a mobile food truck, and brunch {Wurstbar-style, of course}. To top off the killer menu, the staff is also really friendly, they play great music, and their location on Jersey Ave is a nice haven from the crowds on Newark Avenue in Jersey City. Stop on by Sunday-Thursday from 12PM-12AM and until 2AM Friday/Saturday. You’ll be glad you did.

Have you been to Wurstbar Jersey City? Tag us on Instagram @HobokenGirlBlog

Cait lived in Weehawken for three years before moving to Jersey City a year ago. Coming from a family of restaurateurs and chefs, Cait loves everything food-related. Her passion lies in connecting and learning about people through food, whether it’s cooking, eating at a local hole-in-the-wall, or serving a meal at a homeless shelter. During the day, Cait is an inventory planner at Macys. At night, you can find her at a new art opening, immersive theater, improv comedy show, or a live music venue.