Happy Sunday, Hoboken! Could it be that the chilly temps are actually behind us? Now that it’s really feeling like summer, we know you’ll be busy outside making up for lost time. Go do your thing; we’ve got you covered with the latest in this week’s edition of Word on the {Washington} Street: your one-stop-shop for everything news in Hoboken + Jersey City. From Whole Foods coming to Weehawken to a new Hoboken Art and Music Festival location today to the election results, it’s all here for your Sunday AM catch-up. Last Sunday, Hoboken Girl hosted the Hoboken Wellness Crawl.  Needless to say, it was a wonderful day and huge success. Over 550 people bought tickets to participate in the event, which took place all throughout town. There were three check-in points: Devotion Yoga (downtown), CarePoint Health (midtown), and Fit Foundry (uptown), plus tons of stops along the way where crawlers took fitness classes and collected freebies from each of the 60+ businesses that participated. Also, 10% of ticket proceeds are going to the Adult Congenital Heart Association, an organization that is near and dear to HG’s, well, heart. Hot on the heels of Trader Joe’s opening in uptown Hoboken, Weehawken is officially listed as a location “in development” on the Whole Foods website. Though Jersey Digs describes the recent uncertainty of the new store, the Weehawken planning board approved an application from Hartz Mountain Industries {the developer behind Whole Foods} for a “new grocery store” at 1450 Harbor Boulevard. It has also been reported that heavy construction has been going on at that site. The grocery store, as stated by the 365 website, brings to customers “a whole new grocery shopping experience. One that strives to be good for your body, your budget, your lifestyle and the planet.” The race is on between Weehawken and JC to see which Whole Foods / 365 will open first. 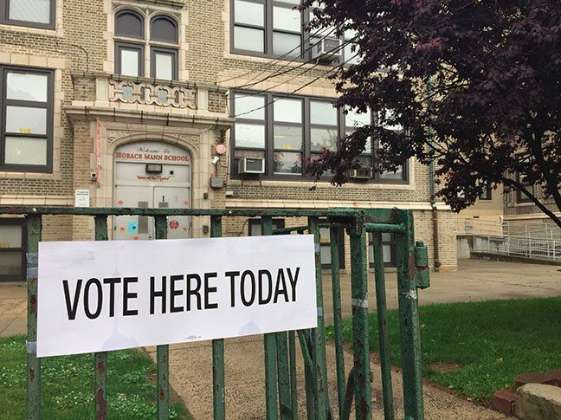 This past Tuesday, residents of Hudson County headed to the polls to cast their ballots in the primary election. The race included candidates for senate, assembly, freeholder, county clerk, state committee, and county committee. Be sure to make yourself familiar with these candidates and see the full election results here {courtesy of NJ.com}. On June 3, Major Zimmer recognized 23 Hoboken businesses that are advancing sustainability and environmental responsibility.  The Hoboken Green Team, which was formally established in 2011,  launched the Green Business Recognition Program this past January.  To qualify for the program, businesses had to complete a pledge, which was then reviewed by the Green Team. The Team determined who was eligible for recognition. Simply Juiced {sidetone: if you haven’t been, definitely check it out} was recognized as the most sustainable business of 2017.  Also on the list were: Bareburger, Basic Foods Organic Grocery, Bwé Kafe, Carpathian Industries LLC, Chartier Group, Christina Andersen Floral Design, Devotion Yoga, Hoby Dogy Pet Care, Little City Books, Local Barre, Mint Market, Monroe Street Movement Space, My Conscience, My Choice LLC, Pilsener Haus & Biergarten, Shipco Transport Inc., Smushed Organics, Sports Acupuncture & Family Wellness, Sobsey’s Produce, Stevens Institute of Technology, The Little Grocery, Urban Consign & Design. Hats off to these businesses! Last week, the town of Hoboken experienced an unexpected tragedy when Father Michael Guglielmelli and his sister Dolores, were killed in a car crash.  The siblings, who had grown up in Hoboken and still lived here, were driving in Freehold, NJ when the accident occurred. Before he retired, Father Mike had been a longtime pastor at St. Francis Church and touched thousands of lives. Hoboken Mayor, Dawn Zimmer, ordered flags to fly at half staff in his honor. The 24th Annual Spring Arts and Music Festival is taking place today from 11AM to 6PM. Due to construction along Washington Street, the festival will be moved uptown a bit from its normal location {typically, it’s between Observer Highway and 7th Street}. This year, it will be between 8th Street and 14th Street. The festival features food vendors, live music, crafters, photographers, and more. Last Sunday, a 38-year-old woman was assaulted while walking in the area of Second and Madison St. around 1AM The woman told police that an unknown man grabbed her from behind and attempted to touch her in an inappropriate manner. Fortunately, she was able to fight off the assailant and did not suffer any serious physical injuries. The Hoboken Police Department has a photo of a person who was in the vicinity of the attack and who may be able to provide further information. Anyone with potentially useful information is asked to contact Hoboken Police. The Hoboken Green Team and the Hoboken Public Library have partnered to host Wellness Wednesdays, a series of free workshops that will provide the community with information about everything from posture to positive psychology. The workshops will take place one Wednesday per month from 6:30-7:30PM at the Hoboken Public Library. The next workshop is June 14th, and covers summer safety. For more information, click here. Pampita Meatshop, an Argentine butcher shop, recently celebrated its grand opening in Jersey City on Central Ave.  They are selling quality meats, grass fed beef, and a choice of Argentine or American cuts. Martin, the master butcher, has over 25 years of experience and is happy to advise customers on how to best prepare their meat, whether they’re roasting or grilling. Pampita delivers, too, so you can purchase their products without having to worry about the hassle of parking.

Have any news tips?

Email kate@hobokengirl.com to let us know!