We’re sure you’ve seen rainbow bagels take Instagram by storm {which we’ve included below}, but there are also a variety of multi-colored treats that you’d think could only be in your dreams — but, they’re real. Ready to taste the rainbow? Here’s a list of every rainbow food you need to try in New Jersey and NYC. Trust us, your life {and Instagram feed} will never be the same after the first bite. We’ve named it an Insta-worthy bagel before, and we’re not afraid to tell you again! Bagels on Hudson is where to go when you just want your photo cravings AND bagel cravings satisfied. You probably come here on the reg for your delicious late-night pizza, but you might’ve not known about this pizza place’s true treasure: UNICORN {rainbow} mozzarella sticks. Yup, you can nosh on a cheesy, greasy treat with colorful insides, as long as you’re into that sort of thing. PS: Their reg mozz sticks are nothing to scoff at either, because the outer shell is pretzel-dipped. So good. Unicorn this and that is where it’s at rn, and these magical macarons are what we like to call next-level desserts. When you go to Milk Sugar Love, you might not want to eat everything only because it’s basically like walking into a fine arts museum filled with ice cream and carefully crafted treats. But, unlike a museum where you’re not supposed to touch, it just so happens that you can chow down on everything inside! PS: Their ice cream is organic, so that means you can easily have two scoops instead of one. You want a unique treat? Then look no further! Here, they’ll make your sweet dreams come to life. There’s a reason they’ve been featured on Buzz Feed and Teen Vogue…they’ve got not one but MANY types of colored doughnuts: the classic rainbow, tye-dye, cotton candy, and more. We suggest wearing sweatpants here. Birthday cream cheese, yes please! At The Bagel Nook, no colorful treat is out of the question. From crazy cereal concoctions to oreo-infused bagels, your sweet tooth is sure to be satisfied. This snug, off-beat shop has locals and out-of-towners gathering alike, all in search of delicious sweet and savory bagel flavors. 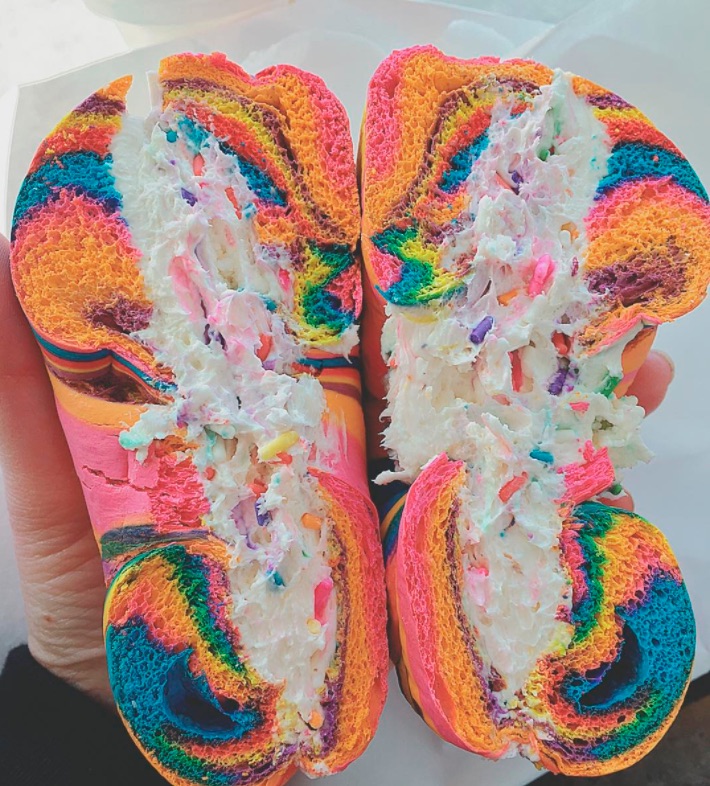 Say hello to the OG rainbow bagel, baked with love and sprinkles in Williamsburg. This swirly dream of colored dough, cream cheese, and sprinkles is pretty much candy for breakfast, and we’re not mad about it. And if you’re feeling extra fancy that day, you can even have them whip up a custom bagel creation! If you were semi-disturbed-yet-fascinated by the rainbow grilled cheese trend, your mind is about to be further blown away with the rainbow burger. YES, there is meat involved in this meal, but let us explain: The bun is dyed {not the meat}, and it creates one rad Insta flat lay photo, in case you’re curious. If bagels aren’t your thing, but sweet treats are where it’s at, then devouring this crumbly, colorfully layered doughnut may be in the cards. Crafted at Moe’s Doughs in Brooklyn, this beauty will stop anyone in their tracks thanks to its complex layers and subtle citrus-zest flavor. Oh, and it’s only $2. Who says money can’t buy happiness? Yes, we’re first to admit this milkshake {and most at Black Tap} is overzealous and certainly brings all the boys {and girls} to the yard for a multitude of reasons. But truth be told, we probably don’t really have to tell you why you need this decadent treat if you just look at the monstrosity of sugar loaded on and inside of it, besides that your’e probably #doingitfortheinsta. Anyways, you need this.

Just a few of our favorite rainbow-colored treats around the area. What is yours?