The Garden State is home to many famous spots — the Jersey Shore, Metlife Stadium, wedding venues with killer views, the best mutz, and something that often gets overlooked — Six Flags: Great Adventure. As if there isn’t enough to do in Hoboken alone {plus we have NYC a quick PATH ride away}, we’ve got a whole theme park just under an hour and a half away. If you’ve never been to Six Flags, forgot it existed until now, or simply left it in your childhood — we’ve got the scoop on how to get there, what to do, and even its history. Read on for a guide to Six Flags: Great Adventure. 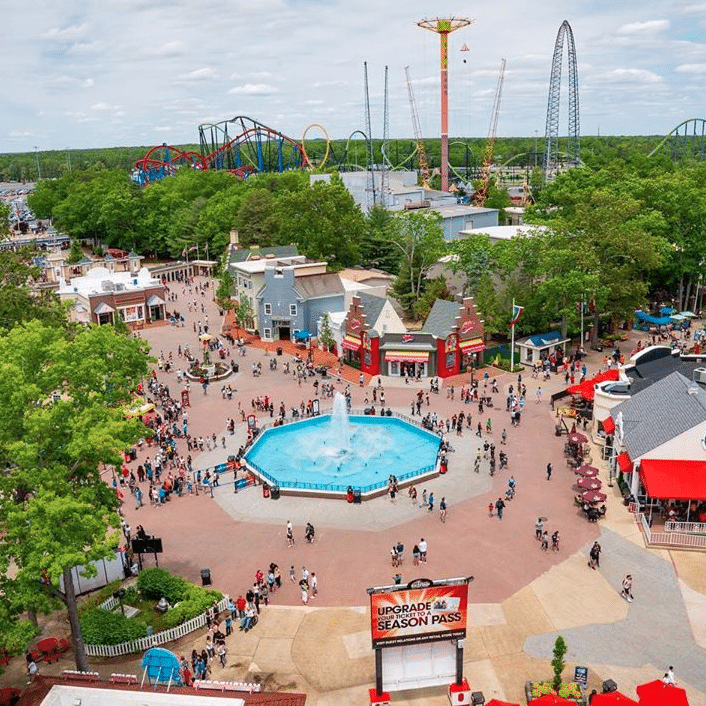 Getting to Six Flags is easy for those with a car or who are open to renting one for the day. Simply take NJ Turnpike South to exit 7A towards the shore points and you’ll be in Jackson, New Jersey in approximately one hour and 12 minutes {expect a longer trip during summer months, of course}.

Read More: How to Do Disney World {As an Adult} in Orlando, Florida Of course, a trip to Six Flags would be incomplete without partaking in some of the amusement park’s most fun activities.

For the wildest of thrill-seekers to the ones who prefer to keep their feet on the ground, there’s an attraction for everyone here. Thrill rides include Kingda Ka {the largest roller coaster in the world with a 418-foot drop}, Batman, El Toro, Green Lantern, Nitro, and more. For families with little ones, there’s plenty of other fun attractions — from Ferris wheels to the carousel, Congo Rapids, go-karts, teacups, and even a safari, you’ll have plenty to see and do.

As far as food goes, there is an endless amount of options. Enjoy a wide variety of sit down restaurants, quick-service spots, healthy options, and all of the classic theme park snacks one could dream of {hello, turkey legs and ice cream}. Guests can easily spend the entire day here without worrying about leaving to grab a good meal.

See More: Your Guide to a Nashville, Tennessee Getaway

Six Flags is a great year-round attraction for adults and children alike. From now through November, the theme park hosts its annual Fright Fest night guests get the ultimate Halloween experience.

The sun goes down, monsters, ghouls, and goblins of the like appear from all areas of the park. You’ll hear shovels scraping on the ground, chainsaws, and a lot {and we mean a lot} of screams. Clearly, this isn’t for the faint of heart and if you aren’t a fan of scary experiences, we suggest leaving before the sun goes down.

There is even a warning on Six Flags’ website saying “Beware! There is no place to hide” — and they mean it. For those who crave even more fear — there are trails around the theme park {think outdoor haunted houses} that are jump and scream-worthy. Also worth checking out is the Dead Man’s Party, a seasonal show featuring talented dancers and singers disguised as zombies.

The park itself, however, remains family-friendly during the day time, so if you’re not into heart-stopping thrills, it’s totally safe to visit in the daylight.

Get to Six Flags ASAP, especially now for Fright Fest {or just for the rides in the daytime}. It’s a great time {even for those without kids} and we’re luckier than we think to have it so close.

What is your favorite attraction at Six Flags? Let us know in the comments!