The NY Metro area is full of sports, especially baseball and football. But we’d be remiss to not mention soccer. Just a short PATH ride away is the Red Bulls Arena in Harrison, NJ, home to the Major League Soccer team the New York Red Bulls. Now, although soccer season has drawn to a close, that doesn’t mean you can’t start prepping for your next Red Bulls visit. Keep reading to discover your guide to navigating Red Bulls Arena. 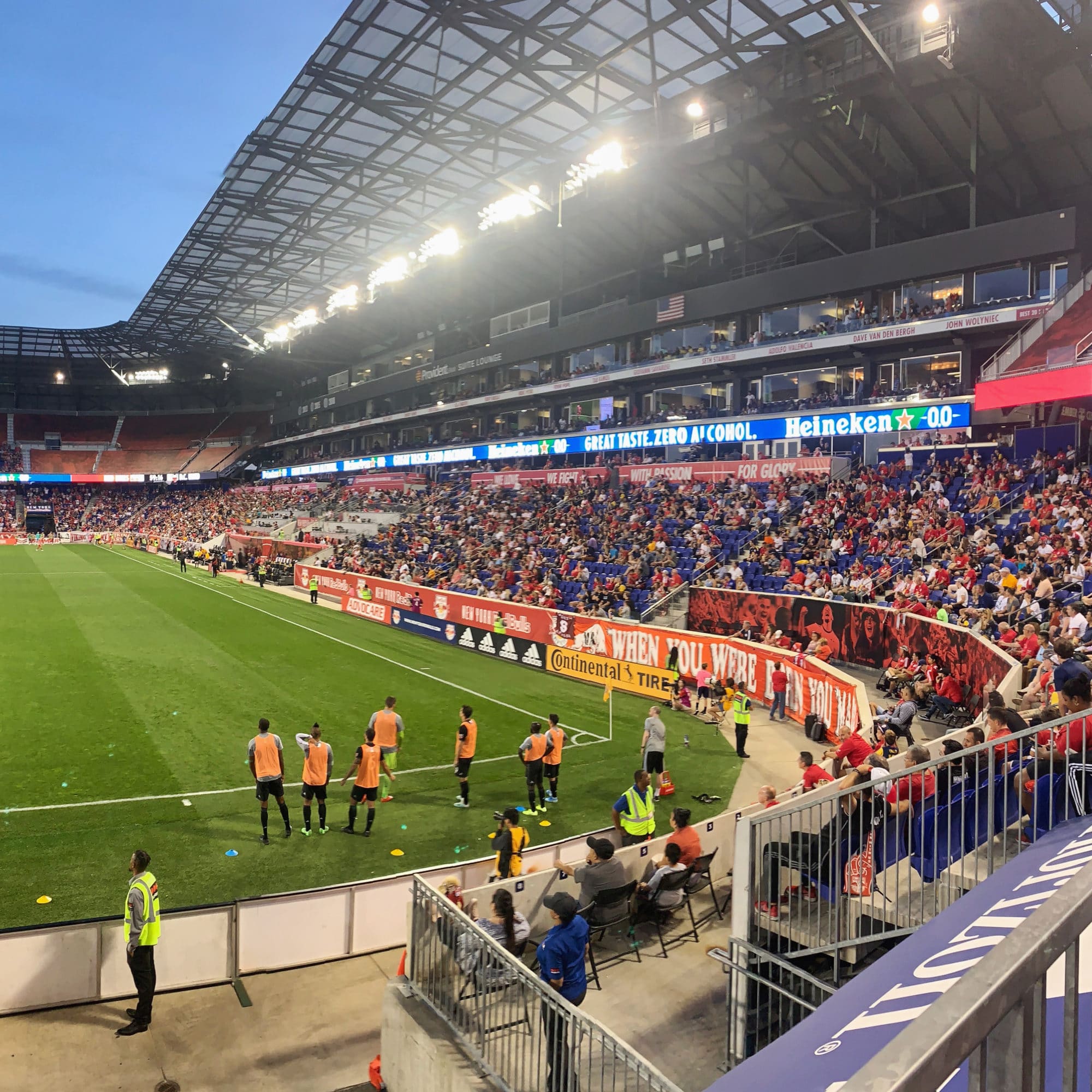 With seating for 25,000 {which includes 30 luxury boxes}, the stadium offers a fun experience for all. Just like the other sports arenas, there are food and liquor vendors as well as merchandise stores to pick up some new gear. And with ticket prices being reasonable {it depends on your seats, but you can easily find tickets under $50}, you’ll have plenty of extra spending cash to check it all out. The assortment of food is what you would expect for a sporting area and will hit the spot with vendors serving things like Premio sausage, craft burgers, nachos, BBQ, cheesesteaks, empanadas, noodle bowls, and dumplings to name a few.  It’s also worth mentioning that they have a vendor strictly serving up Tito’s on tap. Pro tip: if you want to grab a late lunch or early dinner before the game and are craving something more than stadium food, check out Joia — just a quick walk from the stadium, located on the ground level of the Vermella apartment buildings, Joia’s Portuguese food will fuel you up with menu items like paella, garlic shrimp, and porterhouse steaks. The atmosphere is inviting and the staff is super friendly which makes for a fun place to kick off the fun.

Although the soccer season has come to a close, that doesn’t mean you can’t start preparing for next year. The Major League Soccer season is lengthy with matches running from March to September/October {depending on playoff standings}. Each team will play 34 regular season matches, with 17 of those at their home arenas and 17 away at opposing arenas. Most of these matches are played on Saturdays or Sundays which make it super convenient for those with a heavy work schedule during the week. When the Red Bulls are not playing, the arena is host to exhibition games with teams from other countries like Costa Rica and Mexico, so there is always something going on. If you don’t want to take the PATH out to the stadium, it’s a pretty easy drive {unlike many of the stadiums nearby!}. The stadium has a lot directly across the street and parking costs between $10 and $20 for the game. Being that the area is not super built-up yet, once the match is over you won’t be waiting hours for the traffic to clear to get out of the parking lot, which can be one of the most frustrating things about a sporting event.

Read More: What to Do Near the Liberty State Park Light Rail Stop in Jersey City

If all of this sounds up your alley and something that you’d like to participate in, consider scooping up season tickets. Again, ticket prices will depend on where in the stadium you are, but season tickets can be found for about $500 a piece. If you do the math, that comes to less than $30 a ticket if you’re able to make it to all of the home games.  These days, it seems like you can’t even go to the movies for that cheap.

Have you visited the Red Bulls Arena yet? Let us know in the comments!