^ Rebecca Heykes makes her debut on Project Runway’s “Fashion is Back, Baby!” episode

Loyal Footwear has come a long way since launching in 2019. What started with a Kickstarter campaign has now grown into a hot commodity — there is a three-month wait for orders! Founded by Rebecca Heykes, Loyal Footwear is a brand of custom handmade vegan shoes. First, customers place a deposit of $100 to secure a spot in Rebecca’s production schedule. Then, customers pick the style, material, color, and size of the shoe of their choice. Finally, Rebecca spends “long hours” inside her Hoboken studio, Heykes Studio, putting the shoe together until the shoe is ready for pick up or shipping.

So how did the small business owner land a spot on national TV? Rebecca tells Hoboken Girl, “The producers reached out to a friend of mine who has a shoemaking space in Brooklyn. They were searching for accessory designers who actually make their own products themselves (because there aren’t that many of us). My friend connected me with the producer, along with two other women from our small maker’s community, and we all were invited to compete on the show.” On Episode 6 of Season 19, which aired on November 18 (see a preview clip here), Rebecca entered into the competition, partnering with competitor Katie Kortman. Katie designed a colorful dress and Rebecca designed the matching shoe, which ended up being a bright yellow bootie, to show the judges.

“It was very exciting because [producers] kept everything a total secret. We were paired with the designer contestants at random, so going in there I had no idea what type of aesthetic the contestant would have or what type of shoes they would ask for,” Rebecca, a Wisconsin native, shares. “But even though it was random, all of the designer pairings, in the end, felt very harmonious.” The shoe designer, who’s “happily” lived in Hoboken with her husband Curtis Schmitt since 2014 (and their retired racing greyhound they adopted in 2019), shares what her “surreal” experience was like.

“It was an interesting peek behind the curtain into film/tv production, which is an industry I have never been involved with. They have very early call times, the days are long, and lots of last-minute decisions are being made on the fly — the total opposite to what I do on a daily basis which is calculated, rigorous, and methodical,” Rebecca says. “It was a fun change of pace to step outside my comfort zone and have to make a crazy pair of shoes — in my case two crazy pairs of shoes in less than 48 hours.” 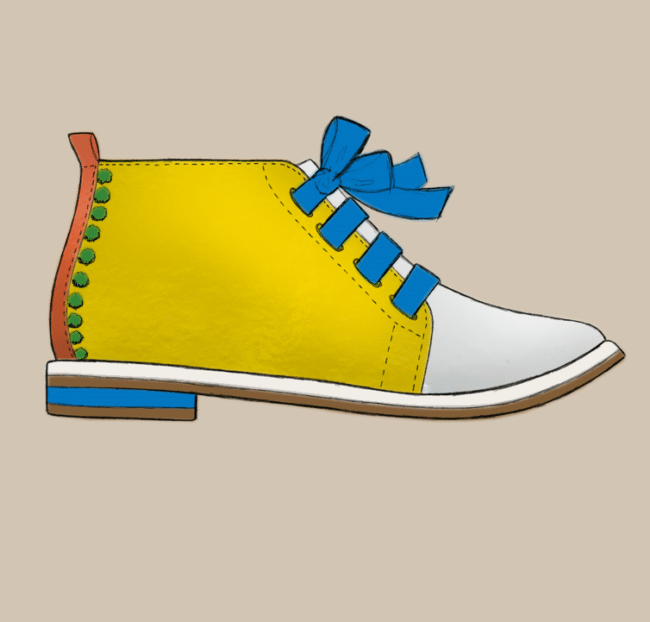 Rebecca says that post-show she and Katie have exclusively launched a limited-edition run of 19 made-to-order pairs of shoes that come in six different colorways. Those interested can place a $100 deposit on the footwear website, found here, to reserve a pair.

Although her time on Project Runway was brief, Rebecca says, “It was energizing and inspiring to meet other makers, especially after a year of almost total solitude…It reminded me just how important it is to shop small and shop local whenever possible. The entire NYC metro area is full of so many hidden gems from milliners, to handbag makers, shoemakers, glove-makers, jewelers, plus someone who appeared on the episode who works in chain mail.” With that being said, Rebecca opens her studio, located at 1012 Grand Street, up to locals and visitors. Visitors “seem to really enjoy dropping by my little studio and seeing all of the materials and the equipment, because it’s all old-school stuff,” she says, adding, “I make shoes the way they used to be made, which is very different from the mass-production that accounts for 99 percent-plus of the shoes sold today.”

Want to learn the craft? Rebecca teaches shoemaking classes, which can be booked at veganshoemaking.com. “It’s a great way to make something unique and also see exactly what goes into a pair of shoes. At the end of the class, you’ll go home with shoes that you made yourself. It’s a fun experience to share with partners, friends, and family members,” Rebecca explains.

To keep up with everything Loyal Footwear, be sure to follow the small business on Instagram here.