North Jersey is known for its beautiful nature and wild animals. Locally, we have wildlife aplenty — baby seals visiting the Hudson, bald eagles making their way to Hoboken, and more wonders of the animal kingdom. And in Edgewater, that wonder is continued. Walking or driving around the shopping compounds or residential buildings near Edgewater, you may often see squadrons of small green birds congregating on power lines or flying around agilely.

Even for those who are bad at bird spotting, they are hard to miss. Just listen to their loud, signature screech. Their round, fluffy shapes and bright green colors seem to belong more to a lush, tropical environment than an urban setting, and often make a bird spotter wonder what they just see. These are quaker parrots and they’ve made Edgewater, NJ home. 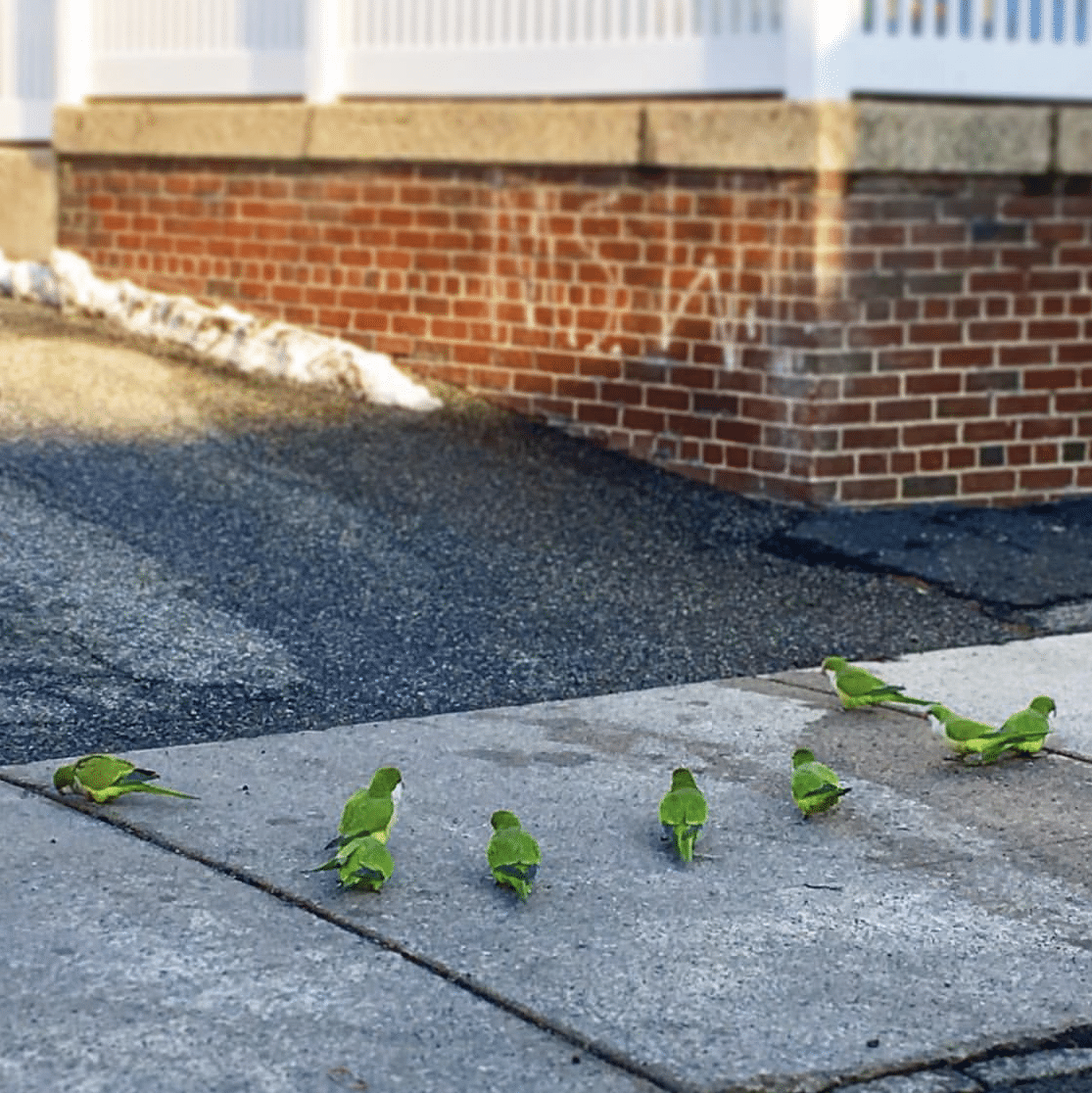 These are quaker parrots {also called monk parrots}, and a large flock of them have been living in the Edgewater area for decades. Originally from South America and now living in a wide variety of habits in North America, it has never been confirmed how such a large colony of parrots was first established in Bergen County. The most accepted speculation was that some birds escaped from a shipping crate from the JFK airport in the 1970s.

These are sedentary birds, and once they find a steady source of the food supply of grass seeds, which Edgewater has plenty of {in Veterans Field Park, for example}, they would settle down in one place and not venture far from it.

They are resilient to the cold climate in Northeast America, and as a communal species have a nimble mechanism in managing the size of the flock – quaker parrots are easy breeders but when the nests get too crowded and food supply tight, some female birds will skip breeding for a one season. With all these favorable conditions, the parrots made Edgewater their new home, and have been a local fixture for more than 40 years.

Read more: Where to Go Hiking Near Hoboken + Jersey City

Local residents have long taken notice of these gorgeous guys. Bird enthusiasts often put out bird feeders in winter, when food is harder to find for the parrots. And most people simply enjoy seeing these little fluffy, neon-green birds, which are so different from the fat, dusty pigeons more often encountered in urban living.

“They are so sweet and beautiful! They make the neighborhood beautiful with nature and the blue under their wings.” a Facebook user commented in a group called “Save the Wild Quaker Parrot of New Jersey”. Yes, there is indeed a Facebook group dedicated to these birds, which has surprisingly 4,300+ members and maintains a relatively active posting frequency.

The posts largely consist of parrot photos and parrot videos, with a lot of oohs and ahhs in the comment section from bird lovers. More “serious” content, such as wild parrot protection tips and call for legislative changes, are often posted as well.

Challenges as a Species

These birds, however, are not without detractors. The bird is still on the Department of Environmental Protection’s list of potentially dangerous species, {which also includes bears} since these South-American-originated birds are considered invasive species.

Officials are afraid that they would jeopardize indigenous species and damage crops {and because of this, it’s not allowed to adopt a wild quaker parrot and keep it as a pet}. However, according to Ali Fragale, the owner of the Facebook page mentioned above, “there is a bill in the state legislature presently to remove the parrots from New Jersey’s list of potentially dangerous species.”

She explains, “They were put on the list to monitor them when they first appeared in New Jersey in the late 1960s. They were imported as would-be pets, and New Jersey Fish and wildlife wasn’t sure what to do with them, so they put them on that list for the purposes of monitoring them. That was over 45 years ago, and they have not harmed crops or indigenous bird species.”

A more material crackdown, however, comes from utility companies. The Public Service Electric and Gas Company {PSE&G} removes parrot nests from utility poles twice a year. The parrots love the heat generated from the utility equipment and are prone to build their homes on the poles.

However, the round-shaped, structurally complex nests made of twigs can be a fire hazard, and thus need to be managed. In recent years, PSE&G has been working with local volunteers and animal rescue groups to work out better removal methods and schedules that minimize disruptions to the flock’s breeding activities.

The recent coronavirus outbreak has added some new nuances to how people think and ultimately view these wild parrots. Birds can be carriers of strains of the flu virus, some of which can be passed to humans. However, no direct link has been found between birds, or parrots, with this particular outbreak. When asked whether he could spot quaker parrots regularly in his daily routine, a local resident demurred. “Honestly, I don’t really want to give much thought to wild birds these days.”