Museums to Visit in North Jersey

Museums were created for one thing, to preserve history for educational purposes. Yet, they provide so much more than that. History offers an opportunity to time travel, to step back in time, and experience what it was like to live during earlier time periods, to see, and touch artifacts from the past. They provide an escape of discovery, inspiration, and enjoyment. North Jersey is home to many museums that specialize in many areas. Here is our list of unique North Jersey museums to visit. Founded in 1986, this museum covers everything Hoboken-related. It’s in one of the oldest buildings along Hoboken’s waterfront, the former Bethlehem Steel machine shop, now known as the Shipyard. It advances the understanding and exploration of Hoboken history, culture, and architecture. Recent exhibits focused on Hoboken’s relationship with the Hudson River, shipping history, the anniversary of the movie “On the Waterfront,” the city’s contributions to the world of music, and its struggle and revival through the 1970s. The upper gallery space features six local artists’ work per year. It regularly hosts educational lectures and events. Founded in 1979, this museum is a treasure trove of fire gear, art, and memorabilia of the Hoboken Fire Department, as well as some international pieces. Unlike most museums, visitors are encouraged to mount the shiny red Ahrens Fox fire engine, circa 1932, the Cadillac of fire trucks, for a true experience. Visitors can see the fiercest fires from the early 1900s were widely documented on postcards and photographs. The building served as a firehouse in the 1880s, and the spacious second-floor room is still used for meetings by firefighters. This building and several other firehouses in Hoboken are on the National Register of Historic Places. Founded in 1980, this museum is dedicated to exhibiting Russian art, particularly Soviet Nonconformist Art. It was initially founded as the CASE Museum of Contemporary Russian Art in Exile. The museum’s historic brownstone building in Paulus Hook underwent renovation and re-opened in 2010. It’s core collection largely culled from human rights activist Alexander Glezer’s private holdings. MoRA has fostered Russian culture, and community in the Tri-State area through exhibitions, events, and lectures. Founded in 1909, this museum is the state’s largest museum. The quality of art and programs are first-rate. It holds major collections of American art, decorative arts, contemporary art, and the arts of Asia, Africa, the Americas, and the ancient world. The current exhibitions on view are Seeing America, Birding in Asia Art, Unexpected Color – A Journey Through Glass, Vantage Points – History and Politics in the American Landscape, Arts of Global Africa, and more. The Ballantine House is a focal point and has been a part of the museum since 1937. It was built in 1885 for Jeannette and John Holme Ballantine of the celebrated Newark beer-brewing family. The brick and limestone mansion originally had 27 rooms, including eight bedrooms, and three bathrooms. The house was designated a National Historic Landmark in 1985.

Founded in 1845, the museum collections include costumes, furniture, paintings, prints, ceramics, glass, tools, and more. The library collections contain manuscripts, reference books, rare books, photographs, maps, broadsides, pamphlets, mass-produced prints, and other materials that document the cultural and historical heritage of New Jersey from the colonial era through the 20th century. According to the website, they formed the largest and finest collection of New Jersey-related material in existence. Some of these items are on view in the changing exhibitions. Access to other materials can be arranged, and the Historical Society encourages the use of its collections for research, exploration, and discovery. Founded in 1961, the museum was originally the Rutherford Junior Museum by parents of school-age children to help connect them to their community. The house is a historic treasure and landmark. It was built in 1804 by the Berry family, who were among the county’s earliest settlers. Exhibits are displayed in the three-level American Dutch farmhouse. Historic artifacts like print materials, photographs, furniture, and artwork are on display. Included in an exhibit is the correspondence by the daughters of John Rutherfurd, a close confidant of George Washington. Founded in 1925, this museum’s first exhibit was curated by locals and displayed natural history objects donated by the residents. The museum was relocated to the restored Thomas Rogers Locomotive Erecting Shop in 1982, allowing visitors to view a variety of artifacts and exhibits. It emphasizes the educational aspects of its interpretive exhibits. It has a variety of collections, including local archaeology, history, and mineralogy. The museum showcases local history through the evolution as a machinery and textile center, the “Silk City,” locomotive manufacturing, Colt arms, and the unique Holland submarines. Founded in 1914, this museum, together with its Vance Wall Art Education Center, provides exhibitions, educational programs, and collections of American and Native American art. After 100 years of service, MAM is recognized as the leading American art museum and community art school in Northern New Jersey. Montclair Art Museum’s collection has grown to over 12,000 works. Jam at the MAM is an online shop that has works by artists across the state and shows your support from the comfort of your home. In the wake of Covid-19, the museum has launched a vast amount of online programs for members. From adult classes to summer workshops for kids, there’s something for everyone. Founded in 1913, this museum is the second largest museum in New Jersey. Originally known as the Morristown Children’s Museum, education has been an intrinsic part of the museum’s mission from the start. The Morris Museum’s Bickford Theatre is a cultural hub for the very best of the performing arts in Morristown and beyond. Today, the museum is the only accredited museum in the United States with a fully-rigged proscenium theatre and has the rare opportunity to integrate the performing arts into its museum programming. It is the only Smithsonian Affiliate in the State of New Jersey and brings Smithsonian resources to the state. Some of the past exhibitions include Aerosol: Graffiti, Community Helpers: Firefighters, and Steampunk Fashion.

Founded in 1972, this museum educates visitors about New Jersey’s role in achieving innovative air, and space accomplishments. The museum exposes children to the aerospace industry’s career potential in spaceflight, engineering, research, piloting, management, manufacturing, and other ancillary industries. The museum contains several unique exhibits including the rocket engine that propelled the X-15 to incredible speed and height records and the first American hovercraft invented by Charles Fletcher. Visitors can see aircraft, helicopters, many airplane models, automobiles, and more. The Dare to Fly program, tailored to 8-15 year old’s, introduces the basic aerodynamic theory and includes a museum tour. It’s taught by experienced pilots and educators, the participants design and build their gliders from raw materials and hold a flight competition. Founded in 1882, this museum is open to all visitors in addition to university students. The origins of Princeton’s art collections date nearly to the University’s foundation, thus making Princeton one of the oldest collecting institutions in America. The museum has two missions, to provide exposure to original works of art and to teach the history of art through an encyclopedic collection of world art. The galleries are continually refreshed with new acquisitions and changing highlights from the collections, including the integration of prints, drawings, and photographs into galleries of European and American art that had until recently been dedicated exclusively to paintings and sculpture, to create a sense of the “period eye.” Some of the current exhibitions are LIFE Magazine and the Power of Photography, The Eclectic Eye: A Tribute to Duane Wilder, and Cézanne: The Rock and Quarry Paintings.

This museum carries the largest selection of paranormal books and gifts. The books range from local and regional titles, historical guides, ghost hunting primers, parapsychology, science and theory, cryptozoological research, metaphysical subjects such as astral projection, reiki, and past life regression, and more. There’s a selection of paranormal fiction featuring ghosts, vampires, The museum offers a wide variety of paranormal experiences, including book signings, guest filmmakers, ghost hunting classes, seances, paranormal investigations, and lectures. There are exclusive revolving collections of paranormal art exhibits. While the museum features items from around the world, it focuses on the state’s paranormal past. For all of the paranormal investigators out there, the museum stocks the latest in ghost hunting equipment, and supplies.

Founded in 1895, this museum exhibits specimens in natural history, archaeology, and industrial history, and more. The Planetarium regularly premiers new and exciting shows that feature state-of-the-art full-dome video and offers both traditional sky and full-spectrum laser programs. The archeology and ethnography collection encompasses over 2 million prehistoric and historic specimens from nearly 100 years of excavation and over 2,000 ethnographic objects. To learn about local history, the cultural history collection includes over 13,000 artifacts documenting New Jersey’s cultural, economic, military, political, and social history, as well as aspects of its decorative arts. The fine art collection has an American focus that highlights the work of New Jersey artists within the context of American art history. 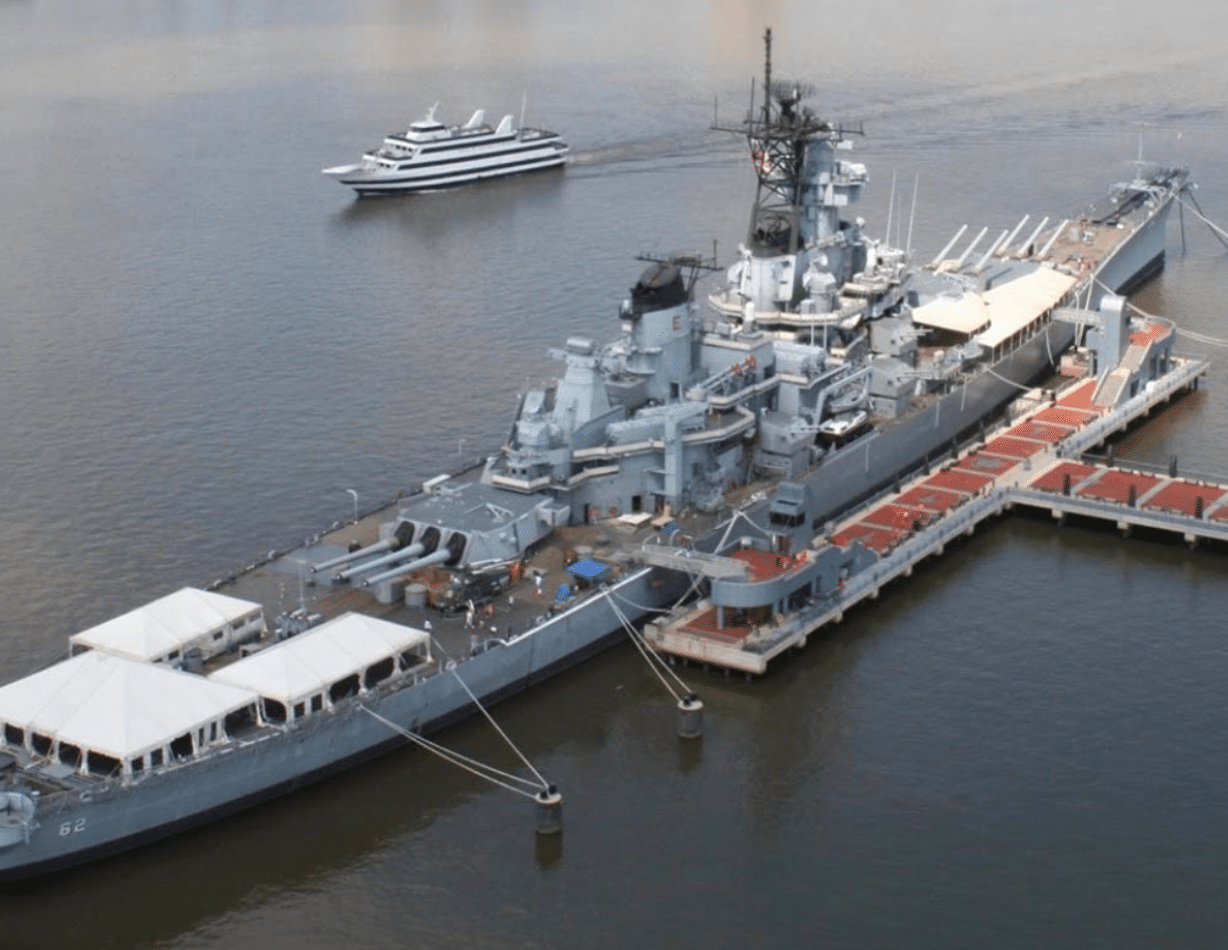 Founded in 1942, this unique museum takes place on America’s most decorated battleship, USS New Jersey (BB-62) – United States Navy Battleship. From World War II to Korea, Vietnam, and active duty during the 1980s, this battleship has seen it all. The battleship is nearly three football fields long and eleven stories high. This is an interactive museum that allows visitors take an up-close look at this nation’s military history. Not only do you see exhibits of artifacts from the largest battleship’s past, but you are put into the exhibit as you go through the tour route. Visitors can sit in the chair from which Admiral Halsey commanded the biggest battleship and the 5th Fleet, stretch out on the bunks where the sailors slept, and climb into the 16” gun turret to learn how the projectiles were loaded. The coolest feature of the museum is that it hosts overnight visits. Founded in 1989, this museum is a former iron and zinc mine. In the 1600s, copper and iron became sought-after by early Dutch settlers. Initially, it was thought that the zinc minerals at Sterling Hill and Franklin contained iron and copper. The predominant minerals were eventually identified to be rich in the element zinc, and in 1836 several small companies began mining, triggering quite a few land disputes. In 1991, the Museum was designated a National Historic site. It houses the largest collection of fluorescent minerals in the world. The museum teaches how mined materials are produced, the many uses to which mined materials are put, the environmental, and societal consequences of resource extraction, and alternatives to mining, such as recycling, and the use of alternative materials.

Do you plan on visiting any of these museums? Let us know in the comments!

A Trip to Reeves-Reed Arboretum in Summit