This past week, a Hoboken Girl reader, Gary, reached out with some very alarming photos — of a 1.5-inch hornet that was crawling on his window at the 7 Seventy House in Hoboken. On social media, he posted asking about if it was a murder hornet and showed some uncomfortably close videos and photos that left us wanting to leave our screens and windows closed for the duration of 2020, let alone the year. {Editor’s note: Read — we tried *not* to panic and carefully do our journalistic duty to investigate it, while crossing our fingers that it wasn’t actually a ‘murder hornet’. Spoiler: It wasn’t – it was a European one}.

But just to give you the lowdown on the hornet situation and help you not panic, here’s a bit more about both the Asian hornet and European hornet species —and what you should do if you see one locally, as well as what Gary saw outside his window, which was this: On Tuesday, Gary shared a few images with us of what he had spotted on the window outside of his apartment.

See below for the full views: He also side-by-sided it with a Murder Hornet {Asian Hornet} google image, and it was eerily similar. ^The top, Asian hornet — the bottom, the hornet spotted in Hoboken

So of course, trying not to panic, we shared with a few State Departments of Agriculture, and two local pest control companies.

All said, it appears like we have a 99.9% confirmation that it was a European hornet which is slightly smaller and less harmful to humans, with just one local pest control company saying “it’s possible that it’s an Asian hornet, but we’d have to see the stinger.”

Unfortunately, we couldn’t get another photo of the stinger, so we’re going to go with European hornet — if only to let us all sleep better at night, and because the experts said so. The State Department also concurred with this assumption, saying, “the Asian variety has an orange pubescence, and this one is more sunflower yellow,” noting that the look and bodies are quite similar, with the Asian hornet being slightly bolder in color.

“Hornets start to come up more once the weather warms up,” said Jersey City pest control owner — they come out of hibernation in a need to feed the young

Now that that’s over, let’s delve into the differences in hornets {something most of us never thought we’d be googling}, shall we?

Asian Hornet, Known as the ‘Murder Hornet’ {a coin termed in 2020 by the media}

The Asian hornet is huge, in fact the biggest in the world. And because it’s become infamous in the media in the last few months, it’s worth discussing.

According to some sources at various State Departments of Agriculture {yes, we went that far}, it “can be deadly to humans, but it’s more deadly to bees,” a rep shared. In fact, in Japan, where they are legitimately “hunted” as a delicacy, CBS News shared that 30-50 people die from these hornets’ stingers yearly.

Since the first sightings in the U.S., the WSDA has implemented sampling and tracking strategies in an effort to eradicate the insect altogether. The Apiary Inspectors of America keeps constant communication with the state and provincial apiary inspection programs, —as well as with the USDA — in order to stay updated on the status of the hornet.

If you’ve ever wondered, “How did the Asian hornet make it all the way to the US/Canada?” — know that scientists are too, but their best guess, according to CBS, is inside of shipping containers, unwillingly.

If you think you’ve come in contact with an Asian giant hornet but are unsure, here are some things to look out for when identifying the insect.

If you don’t see the hornet itself, you may be able to detect it by the aftermath of its attack. An Asian hornet attack will leave piles of dead bees outside of their hive — most of them headless.

If you think you’ve spotted an Asian giant hornet, it’s very important to be extremely cautious and avoid the insect, especially if you’re allergic to bee or wasp stings. The stinger of the Asian giant hornet is much longer and more toxic than any local bee or wasp — even beekeeping protective clothing is not sufficient protection against a sting from one of these hornets. If you find a colony, do not attempt to remove it yourself, just report it to the WSDA immediately. 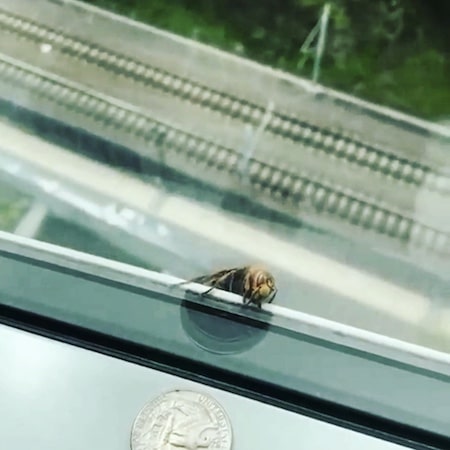 Now the European hornet (Vespa crabro) is the largest eusocial wasps native to Europe, and it’s the only true hornet found in North America. The European Hornet is known for making intricate, paper thin nests out of plant materials and other fibers. Typically, this type of hornet only stings in response to being attacked — like getting stepped on or grabbed; other than that it tends to avoid conflict. However, the hornet can be very defensive of its nest as well as aggressive around food sources, so it’s important to be cautious of those triggers if you’re allergic to bee stings.

See More: How to Dispose of Medicine Safely in Hoboken + Jersey City

The Difference Between the Two Hornets

Because of its reddish-orange wings and brown and yellow striped abdomen, the European Hornet is often confused for the Asian Giant Hornet. One distinction between the two, is that the eyes of the European Hornet are deeply indented and shaped like a C. Also, while it has hair on the thorax and abdomen, it’s less hairy than most bees.

So there you have it. Don’t stress if you spot one of these, but do take a picture and submit it just in case! For more wildlife spottings in urban dwellings, check out our latest article here.