Back in 2021, Mayor Fulop tweeted that Jersey City’s iconic Loew’s Theater located at 54 Journal Square Plaza will finally undergo much-needed and decades-in-the-making renovations with the goal of opening it up to the public once again, regaining its former glory with the help of the NJ Devils Entertainment Inc. which runs the Prudential Center. Now, the New Jersey Economic Development Authority (NJEDA) announced that it approved the award of the Historic Property Reinvestment Program’s (HPRP) tax credits to support the rehabilitation. The renovations will cost $110 million in total. Read on for what we know about the 3,000-seat theater. 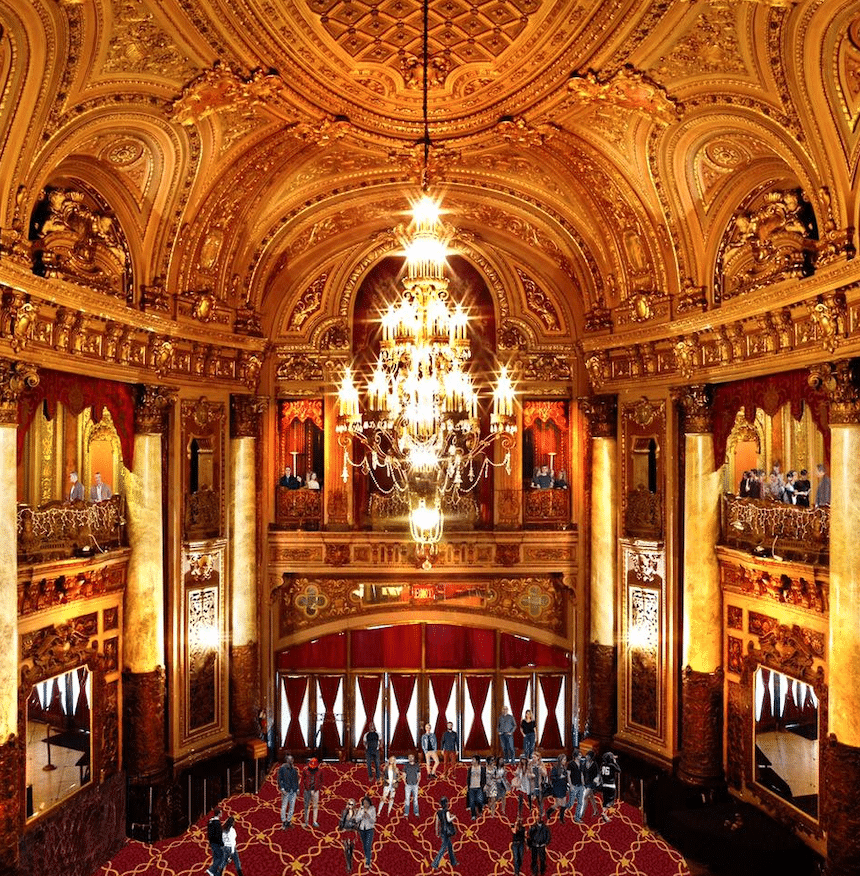 On October 12th, 2022, the NJEDA approved the award of Historic Property Reinvestment Program (HPRP) tax credits to support the rehabilitation of Loew’s Theatre in Jersey City, according to a press release from the NJEDA. The release says that” This project, which marks the first award under the HPRP, is expected to result in the complete rehabilitation of the historic theater for use as a live performance, movie, and entertainment venue. The award will be $42.27 million in tax credits, bringing the total estimated cost of the rehabilitation to $110 million.

Read More: The Hoboken Terminal is Getting a New Look — Here’s What to Expect

The statement from Mayor Fulop on Facebook read, “Big news for #JerseyCity – Major Entertainment Venue for JC Moving Forward – FINALLY. Much of the team that did sister theater in Brooklyn are involved here but this will be a partnership with the NJ Devils Entertainment Inc. which runs the Prudential Center which is one of the most booked venues in the country. This will be a $72m renovations returning it to that magic of 1929 when it first opened. We may be in tough times today but live entertainment will be back and cities that bet on arts/entertainment/culture will still be desirable places to live + work. Thank you to the partners that have been part of setting a roadmap here and following a long process to get here including NJ Devils Entertainment, the office of Gov. Murphy and the state EDA, Commissioner Bill Odea, and The Friends of the Loews.” Loew’s Theater opened in 1926 and is on the National Register of Historic Places. It was a go-to for all things cinema, and for good reason. The space is that of a past world, a world of glamour and grandiosity. The theater shut down in 1986 and remained so with the exception of black-and-white movie screenings and small school productions here and there. Luckily, the Theater is maintained by volunteers from “Friends of the Loew’s” who ensure that it is well-kept and preserved as it is one of the last remaining beauties from generations ago.

“The job entails everything from some pretty big construction projects to basic but absolutely vital cleaning and polishing. It’s what got the Loew’s open after being closed and threatened with demolition years ago, and keeps it operating year after year as a nonprofit venue for everything from classic film to student shows to major concerts – all on a shoestring budget, with prices that are kept as affordable as possible,” according to the website.

To donate to the Friends of the Loew’s, see here.

Will will keep you updated as more details unfold and renovations begin.