Local favorite Augustino’s, located at 1104 Washington Street, is beloved by Hoboken neighbors and visitors, and is known to be a hot spot for celebrity sightings. This iconic Italian restaurant has been the location of many star sightings over the years, and this week another A-list celeb visited the red-awning restaurant in uptown Hoboken. Johnny Depp, who is currently on tour performing with Jeff Beck, visited the restaurant earlier this week. Read on to learn more about this quintessential Hoboken spot and why Johnny Depp was in town.

Augustino’s, located at 1104 Washington Street, is a family-run business specializing in classic Italian food. The atmosphere is as old-school as it gets: reservations are notoriously difficult to get and the small space means there’s always a wait. Credit cards aren’t accepted so be sure to bring cash. There are eight tables and eight spots at the bar. The exposed brick walls add to the cozy vibes. Hoboken native Angelo ‘Buddy’ Yandoli and his wife Sharon opened the restaurant in November 1997 and it has become an essential part of the neighborhood fabric. The restaurant is named after Buddy’s father, August John Yandoli, who sang in an Italian-American quartet in the 1930s. The family has been in the restaurant business in Hoboken for a long time, owning a restaurant called The Lamppost in the 1970s and another popular spot called Augie’s Place, which is now known as Court Street. Read More: The Best Hoboken Restaurants to Take Your Parents to Eat

The walls are lined with photos of the Yandoli family along with celebrity guests who have visited the restaurant.  Hoboken native Frank Sinatra is pictured with Augie Yandoli in several photos. Other celebrity visitors include the Jonas Brothers and NY Giants quarterback Daniel Jones. 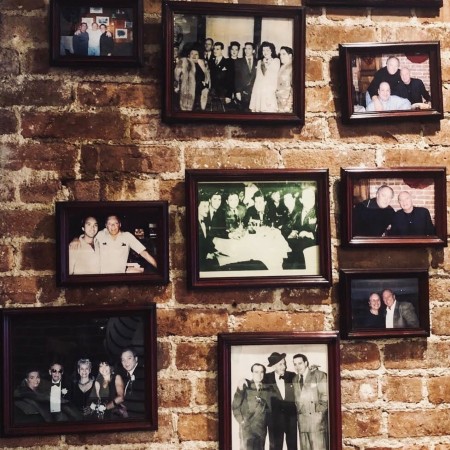 Why The A-Listers Were in Town

Johnny Depp, an award-winning actor, 90’s heartthrob, and musician, is currently on tour with Jeff Beck. The two released an album earlier this year. Jeff Beck is an award-winning guitarist named one of the top five guitarists of all time by Rolling Stone magazine. The two performed on Tuesday, October 11th at the Hackensack Meridian Health Center at the Count Basie Center for the Arts in Red Bank. The next tour stop on Thursday, October 13th is in Kingston NY, so naturally, Hoboken makes for a great pit stop. See More: These 3 Celebs Were Spotted in the North Jersey Area This Weekend

The album, 18, is a mix of originals and covers performed by the duo. Johnny Depp has been playing the guitar since high school, and has performed with several musical heavyweights including Alice Cooper, Joe Perry, and Flea. Augustino’s confirmed Jeff and Johnny’s visit and shared this photo exclusively with The Hoboken Girl. Johnny Depp is in the center wearing a hat. Guitarist Jeff Beck is second from the right wearing sunglasses. Sharon, Buddy, and Christine of Augustino’s are also pictured. A source tells HG that the table was covered with various appetizers, and Johnny reportedly said that it was the best food he had ever had. We hope Jeff and Johnny didn’t leave without tasting Augustino’s legendary icebox cake.