Gourmet sandwiches are en vogue these days. As casual dining becomes a defining force in the food scene, even celebrity chefs have rushed to feature heavily-loaded, everything-hand-crafted sandwiches on menus that pay homage to their cultural roots and childhood experiences. Maybe this is the way sandwiches are supposed to be — a casual but substantial dish so frequently eaten that it sometimes becomes an emblem of personal or community memories. And it doesn’t have to come with a hefty price tag or social media fanfare.

In Hudson County, there are plenty of inexpensive gourmet sandwiches that also offer eaters a glimpse into a vibrant community, such as the “pan con bistec” at Dos Amigos located at  5300 Bergenline Avenue, West New York. Here’s a look inside this West NY hidden gem. A Twist on the Classic Cuban Sandwich

Sometimes nicknamed “Havana on the Hudson,” the stretch of Bergenline Avenue that runs through West New York down to Union City became a lively Cuban community starting in the 1960s, as a result of an influx of Cubans fleeing the socialist regime. More recently, immigrants from other Central and Latin American countries also moved in, turning this neighborhood into a vibrant Latin community. A quick stroll along Bergenline Avenue will lead you to clusters of small restaurants selling Mexican tacos, Colombian chicharrones, Peruvian-Chinese food {yes it’s a real thing, the official name, proudly advertised on some neon store signs, is “Chifa”}, and of course, some of the best Cuban-style sandwiches in the country. For many eaters, a Cuban sandwich means the Cuban sandwich, made of ham, mild cheese, soft white bread, press-toasted and flavored with pickles and mustard. However, in a meat-loving food culture as Cuban culture, the bread and meat combo {often called “pan con + [any meat]” on menus} goes far beyond the famous ham and cheese fare. Another classic is “pan con bistec,” or “bread and steak.” The sandwich, at first glance, looks like a spartan version of the cheese-smeared, onion-and-pepper-loaded Philly cheesesteak, but at Dos Amigos, it is equally satisfying to the taste.

The eatery looks like a no-frills lunch counter. The space is sparsely decorated with baseball memorabilia and filled with the cheerful humming of blenders, feels timeless. The food menu is simple — pan con bistec, and pan con bistec only. For something as simple as a loaf of bread stuffed with meat, however, this sandwich is the real deal.

First, there is the hefty, inch-thick layer of coarsely cut beef. A pan con bistec typically uses a tough cut of meat, which is tenderized and flavored with a subtle citrus-and-spice-based marinade. The right amount of pay-frying makes the meat moist, springy, with a pleasant chewiness.

Then there are the toppings. Very light sauteeing removes the rawness of the sweet onion but keeps some of the crunchiness. But what makes the sandwich interesting is the French fries — not on the side but in the sandwich. Unorthodox as it may sound, the fries, in fact, enhance the texture of the sandwich. Still hot from the frying pan, they are firm and crispy even after being stuffed between the meat and bread. The inside is mellow, smooth, almost creamy — a hearty, starchy addition to the meaty chunk that also loosens up the dense texture of the sandwich.

Also, there’s the bread. Like other sandwiches of Cuban origin, the thin-crusted, lard-leavened loaf is buttered and press-toasted to a beautiful golden brown. The inside remains light and airy. The meat to carb ratio is just right — enough meat to satisfy any meat lover, but not so protein-heavy that the sandwich, big enough to feed two people, becomes hard to eat.

The limited drink menu consists of a handful of milkshakes, mostly of tropical flavors — soursop, papaya, mango, and guanabana. For a more unique Cuban treat, get the “batido de trigo,” a malty, creamy milkshake made of puffed wheat cereal. Those who are really hungry can pair it with the sandwich, but it’s also substantial enough to serve as a snack on its own.

A Fan-Favorite for Decades 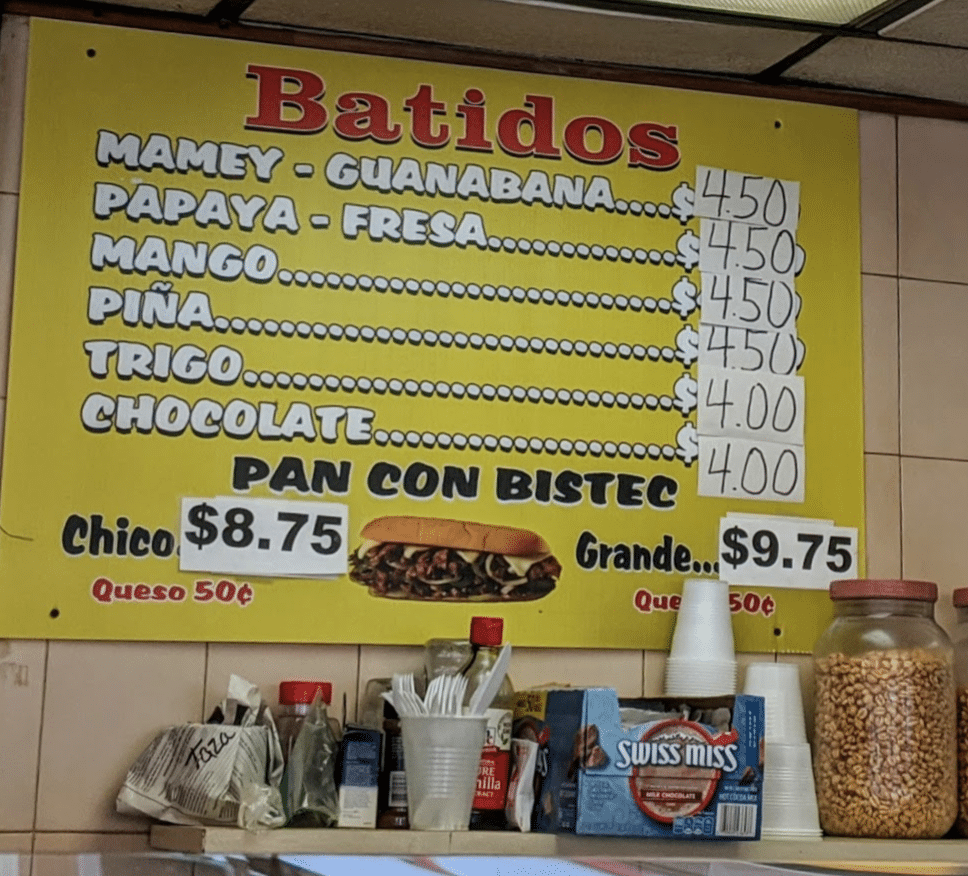 The restaurant has been a favorite haunt among locals for decades. “Love that place. According to my father, the menu has been the same for over 30 years,” a New Jersey local used to live in the area told Hoboken Girl. He has since moved away, but when asked about the restaurant, he immediately said, “now I want to drive up and go again.”

In fact, the sandwich has become something of a neighborhood symbol that is inseparable from personal memories. Online reviews are full of old stories and sometimes nostalgia. “I’ve been coming here since I was six years old. My dad would bring these sandwiches after a hard day of work.” “Love this place. Have been eating there since high school.” In fact, people who move away have kept coming back to dine at Dos Amigos. “My wife lived in New Jersey for a few years and then she moved down to Miami, and she kept telling me about this place and being the best for pan con bistec, better than any in Miami. We flew up to New Jersey[…] and went […] She was correct,” a Trip Advisor review reads.

Hoboken Girl visited during a relatively quiet hour on a weekend. Chairs and tables have been stacked up due to the pandemic and the usual hustle and bustle happening inside the shop have come to halt.

But even at a relatively quiet hour, there was a constant stream of customers, and a sizable staff was busy taking orders and assembling the dishes. Some eaters impatiently opened the paper wrap on the curbside and took a bite on the street. The previous crowds may not come back soon, but the appreciation for a good sandwich has never waned.