New Jersey is known across the country for its unique culture and the attitude of its residents. The slang associated with the state may seem foreign to outsiders, but true Jerseyians know this is just who we are. Whether your friends need this glossary to follow along or you’re trying to sound like a local, we’ve got it covered. Read on for some of the most popular North Jersey slang terms along with their definitions. 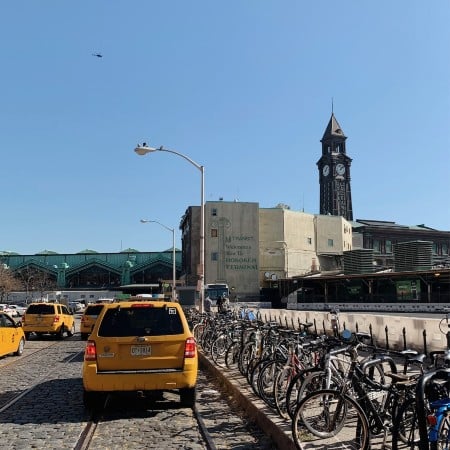 This nickname is derived from the longer name, mozzarella. North Jersey has dozens of incredible Italian restaurants and delis and is home to thousands of proud, Italian-American residents — so getting fresh mozzarella is a staple. Naturally, locals shortened the name to make ordering it even easier.

While the rest of the world calls it pork roll, North Jerseyians know the only brand worth getting is Taylor Ham. This salty, processed meat is available mostly in the tri-state area. Even though the Taylor Ham packaging labels the product as pork roll, many North Jersey locals are more familiar with the brand name. This meat is typically served on a breakfast sandwich along with egg and cheese on a bagel or roll.

Read More: New Jersey is the 2nd Best State to Live in, According to this Study

Many North Jersey locals still refer to the brand name, MAC, when talking about an ATM. MAC was the brand of a large majority of ATMs in New Jersey, New York, and Philadelphia as well as a highly popular pre-payment app on smartphones. Even though they are less commonly used today, if you need cash, head to the MAC machine.

North Jerseyians can only be talking about New York City when making this reference. Due to the proximity (and the need to shorten every common phrase) New York City, NY is known simply as The City.

If North Jerseyians know about one thing, it’s pizza. A plain pie is what the rest of the country refers to as ‘cheese pizza.’ Pizza is made with cheese already and everything else is a topping — case closed.

The Jersey Shore is iconic and locals love to hit the beach all summer. From Memorial Day through Labor Day, North Jerseyians are headed ‘Down the Shore.’ Usually, these trips take place over the weekend, but for those working from home, trips to the shore can happen at any time.

This term is relevant throughout the entire state. In New Jersey, it’s illegal to pump your own gas, making ’20 Regular Cash’ a common phrase. Translation? “I would like you to put $20 worth of regular gas into my car, please and I will pay with cash.” The amount of gas received for $20 may vary.

Three words that no deli employee wants to get wrong — salt, pepper, ketchup. The abbreviation is typically used when ordering a breakfast sandwich with egg, like a pork roll or bacon egg and cheese, to make sure every bite is flavorful.

The Garden State Parkway is one of New Jersey’s most traveled highways. Because the exits are numbered by mile markers and runs north to south, asking “What exit?” is a quick way to understand where the destination is located.

There are many slang terms that have been adopted, across the country, to refer to a large group of people. North Jersey’s term for this is “youse”. This term is usually used in a casual setting and can refer to a group of people nearby. It’s often combined with ‘guys,’ making the full phrase, “Youse guys”.

This term is likely the most confusing to outsiders. A jug-handle does not refer to a container to hold water, but rather a traffic pattern for left turns on busy highways. Other states allow drivers to turn left onto certain highways from a lane between opposing sides. Not New Jersey. Drivers must make a u-turn through a series of lights and/or stop signs to enter the opposite side of the highway.