To get some background on MLK Day, we did a deep-dive into the history that involves Dr. Martin Luther King Jr. in Hudson County. There’s actually a decent amount: in fact, the revered pastor and civil activist spoke in Jersey City, twice that we know of, and here’s what else we found.

Dr. King spoke at least twice in Jersey City in the ’60s, according to CityofJerseyCity.org. On September 21st, 1965, he received an honorary Doctor of Law from St. Peter’s College. Upon his reception, he gave a speech called “The American Dream” to over 500 people during the annual Michaelmas Convocation — a much-photographed event, and even televised, as Dr. King spoke out against segregation and for equality.

Unfortunately, the MLK Jr. Papers Project at Stanford reported it doesn’t have a transcription of the speech, but there are many historical references to its occurrence, including this photo.

From first and second-hand accounts, it was noted that he said, “The time is always now,” and postured that legislation is an important part of the civil rights battle. He was also quoted saying that “although legislation could not change a person’s ideas, it could regulate his behavior and restrain the heartlessness.”

Citing his own non-violent forms of resistance, he condemned the violence and said it created more problems than it solved, foreseeing a world in which “there will be a symphony of brotherhood.” A world, “where all of god’s children, white and black, Protestant and Catholic, Jew and Gentile, will be free at last.”

The second time Dr. King came to Hudson County was Wednesday, March 27th, 1968 which was less than seven days before his assassination. At this visit, he spoke in front of over 2,000 people at Metropolitan A.M.E. Zion Church.

In another noteworthy instance in D.C., King was photographed with Jersey City police officer Charles Jackson during a speech. Officer Jackson was hired as a security coordinator to assist with the event in our nation’s capital. 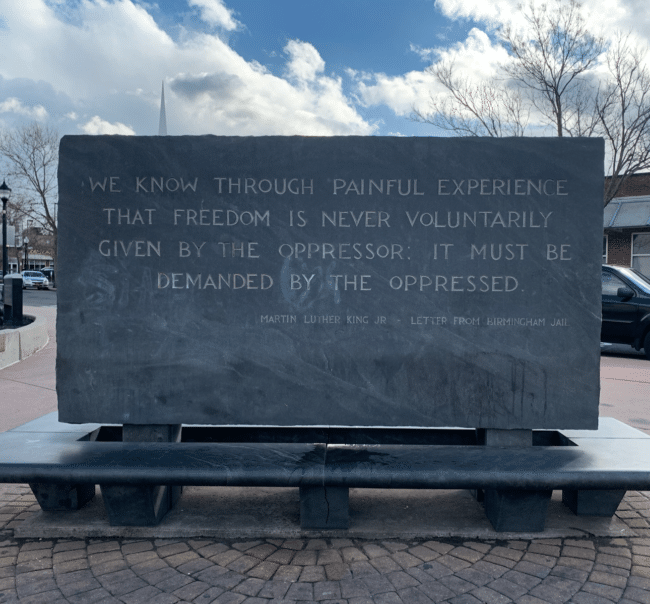 Today on MLK Boulevard in Jersey City, there stands a large bust of Dr. King.

And with that knowledge — we’ll leave you with a quote:

“Our lives begin to end the day we become silent about things that matter.”