Now open, Little Island Park has been making headlines since the design plan was released in 2020, as the shape and concept of the park is very unique. It now stands out clearly in the skyline. The Background of Little Island Park

Similar in concept to Randall’s Island Park or Governors Island — local islands surrounding Manhattan featuring prominent green spaces that can be reached by ferry — Little Island Park was first conceived after Superstorm Sandy rocked the Tri-State Area. The original concept, created by English designer Thomas Heatherwick of Heatherwick Studios in collaboration with landscape architecture firm MNLA, is meant to simulate the look of “a leaf floating on water,” Time Out reports.

This “leaf floating on water” look is aided by 132 concrete pots, which pile together at different heights to take a shape reminiscent of tulips opening. As the pods travel closer to the water, they slim out, not unlike the stem of a tulip. The concept of Little Island Park began to take shape in 2013. In the wake of Superstorm Sandy, Manhattan’s Pier 54 was irreparably damaged, and Diller and Von Furstenberg began working with the Hudson River Park Trust to develop a repair and revitalization plan that would bring back the Pier, stronger than ever.

According to the Little Island Park website, “Diller chose to reimagine an entirely new type of public space for New York, one that would create an immersive experience with nature and art.”

Aside from a leaf floating on water, other sources of inspiration for Little Island Park include pop-up children’s books, the land of Oz, and an enchanted forest, Diller said.

In an interview that took place on May 21st, the couple talked about what the thought/design process of the park was like, what they hope people will get out of the new space, and what their favorite part of the park is.

About 500 events are scheduled between June 15 and the end of September. “This is only for people’s pleasure. It has no other purpose. For me, if you walk up that bridge and you leave New York behind, and you enter our little Oz, and it brings you pleasure, it was all worthwhile. It’s not cancer-curing, but it’s pretty good for the spirit of life,” Diller explains.

As for DVF’s favorite spot, “It’s all about the sunset. I used to go on that pier when it was nothing. When my brother called me to tell me my mother died, this is where I went. Every day, that sunset is a very magical moment for me.” Heatherwick also said the inspiration was drawn from the destruction Superstorm Sandy left behind — the piles of wood that remained of the original pier.

“My studio and I became interested in the remains of the old piers on the west side of Manhattan, where their top surfaces had long gone, leaving only hundreds of ancient structural wooden piles sticking out of the river,” Heatherwick has said.

According to 6sqft.com, the cost of the park is estimated at $250 million.

What to Expect at Little Island Park

The free to the public “floating” park includes natural, outdoor spaces led by winding pathways that encourage visitors to explore. According to the Little Island Park website:

The park features seating lawns, gentle slopes, winding pathways leading to dazzling views, and a variety of spaces for performances and play as well as rest and relaxation. The undulating topography of this oasis will surprise and inspire visitors with its range of elevations, lush landscaping, and hidden meadows, encouraging visitors to return time and again to explore all that Little Island has to offer.

The green space also features a 700-seat amphitheater, which according to the website’s vision and design page, looks like a fully outdoor space punctuated by trees and other vegetation. The amphitheater leads up to the Southwest Overlook on the island’s right, which marks the park’s highest elevation point at 63 feet high.

Little Island Park also features a unique entrance experience called the South Bridge. The South Bridge, which runs underneath the park’s concrete pots, will allow guests entrance to the park from the West Side Highway’s esplanade.

Aside from its unique visual attributes, the ultimate vision for the park is a free-to-the-public gathering space. According to the website, “The park will host an array of arts, educational and community programs, each staged at various points within the site and all throughout the calendar year.”

What Has Taken So Long

Plans for Little Island Park hit the ground running fast, with Diller originally proposing a version of Little Island Park in 2014, just two years after Superstorm Sandy. However, opponents of the park — namely, New York real estate investor and developer Douglas Durst, the chairman of The Durst Organization, a co-developer of the One World Trade Center Development who funded opposing groups of the project — effectively deaded the park through intense opposition.

In 2017, Diller announced via The New York Times that he had pulled the plug on the project that was once thought to become a waterfront icon and bigger symbol of New York itself, much like The High Line. 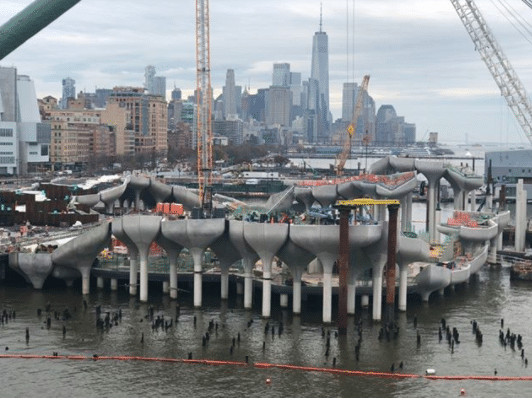 But Little Island Park saw the light of day once again when Governor Andrew Cuomo stepped in and committed to complete the park’s then unfinished 25%. Governor Cuomo negotiated a deal between Diller, Durst, and other vocal opponents of the park, which included barring development at the marine estuary and dropping the lawsuit.

Now, New York City goers will enjoy all that is offered by Little Island Park.