So much has happened this weekend in Hudson County, so sit back and get ready to catch up on everything that’s gone on in the last few days. With Hoboken poised to ban single-use plastic bags in retail and grocery stores by January 2019, Greek Town experiencing a fire, and the Jersey City obscenity law rejected by City Hall, our Hudson County towns are certainly going through some changes. Keep reading to find out what else you missed this week: Sad news downtown from earlier this week: Greek Town has been closed temporarily due to a fire at the restaurant. The Hoboken Fire Department reported on Twitter: “Last night, HFD extinguished a fire in Greektown Restaurant (86 Garden Street). No injuries have been reported and upstairs residents have not been displaced. The restaurant will be temporarily closed. Thank you to BC Cassesa and Group B.” It is unclear how long it will take to get the restaurant back up and running, but we will update as we know more. {Editor’s note: We had so many readers reach out about this; it’s good to see that Greek Town is quite beloved with its patrons.} Earlier this year, a plan to adjust the Jersey City ban on women going topless in public was introduced. The anti-obscenity proposal strove to lift the ban on toplessness in public by using vague wording; but last Wednesday, City Hall squashed the adjustment, maintaining that women are not to expose “below the point immediately above the top of the areola down to the bottom of the areola” in public. The bill, championed by Councilman James Solomon, also included gender-neutral, trans-friendly language, free speech protections; it also removed restrictions on peoples’ private sex lives.

A developer’s lawsuit against Jersey City’s own Golden Cicada dive bar has officially been dropped. Developer Lance Laurelli and the L Group filed a lawsuit against bar owner Cheng Tan. The suit claims Tan agreed to sell the L Group the land, sealing the deal in a Letter of Intent back in 2016. Allegedly, part of the agreement was that the L Group provided Tan with confidential financial information about the deal. The law suit alleged Tan then used that information obtained from the agreement to enter a different agreement with a separate developer and sell the land to them instead.

Judge Joseph Turula dismissed the complaint with prejudice as of September 10. The order states “undisputed facts are that there was no contract between the parties.”

Hours are as follows: Monday through Friday, from 9-4 p.m. Want to make an appointment or learn more information? Call Caufield at 201-420-2000 ext.1311 or email ccaulfield@hobokennj.gov.

Hoboken Museum Hosts ‘Made in Hoboken: Tales of Inventions with Ties to the Mile Square City’ On Sunday, October 28 {today!} the Hoboken Museum is hosting a special talk entitled, “Made in Hoboken: Tales of Inventions with Ties to the Mile Square City.” David Zimmerman, Director of Technology of Commercialization at Stevens Institute, is hosting the chat, which will kick off at 4pm. Admission is $5 and free for museum members.

The talk will focus on modern-day inventions that originated from Hoboken. Think: the zipper, stage monitor, Mallomars, and steam-powered engines.

On October 21, a warrant for arrest was issued for a 29-year-old Jersey City resident, who was later detained and charged with aggravated assault and arrested on October 23. The case is currently under investigation. On Wednesday, October 24, both Jersey City mayor Steven Fulop and Hoboken mayor Ravi S. Bhalla signed matching executive orders that strive to expand opportunities to businesses owned by veterans, members of the LGBTQ+ community, and those with disabilities. A Hoboken man accosted a woman in a building elevator, cornering her before stealing her phone and purse. The man was later caught near the 5th Street building and identified as Andre Wheeler, a 35 year old male with an illustrious history of violent crimes. Wheeler was charged with robbery, burglary, theft, and false imprisonment.

Last night, HFD extinguished a fire in Greektown Restaurant (86 Garden Street). No injuries have been reported and upstairs residents have not been displaced. The restaurant will be temporarily closed. Thank you to BC Cassesa and Group B.

The Hoboken Fire Department responded to a call last Sunday, October 21 on Garden Street. Greektown Restaurant at 86 Garden Street suffered from a minor fire and as a result, will be temporarily closed.

“No injuries have been reported and upstairs residents have not been replaced, ” the official Twitter account for HFD reported. Hudson & Co nautical gastro pub has officially opened its doors in Jersey City as of Thursday, October 25th. Located on 3 Second Street, in Jersey City, Hudson & Co’s hours are 11:30am-11pm Sunday through Wednesday and 11:30am-12am Thursday through Saturday. Hudson & Co sits right on the waterfront in the Harborside district of JC.

Car Crashes into Wallace School Playground on 11th and Willow 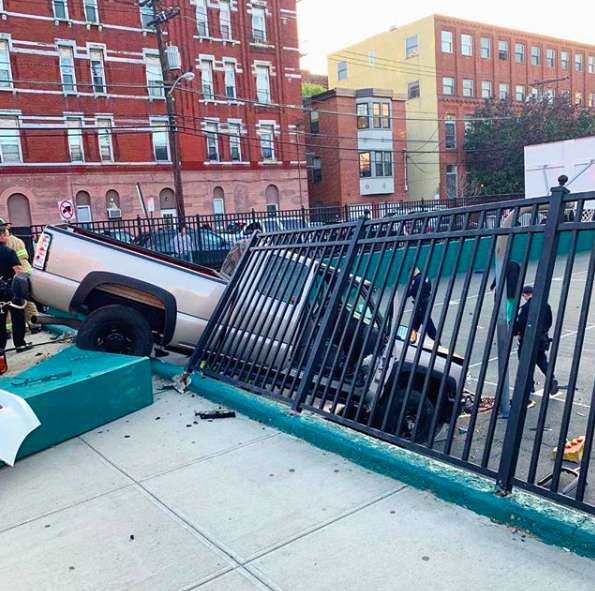 A two-car crash on 11th and Willow Streets caused a pick-up truck to knock down the fence around Wallace School’s outdoor playground. The crash occurred on Thursday, October 23.

“Scene is finally clear @ Wallace @HobokenSchools,” Chief Ferrante said in a statement late Thursday night. “Fortunately no one seriously injured. One driver injured & one child with a minor injury but he is ok. A press release will come out tomorrow… One driver is under arrest and investigation continues.”

The crash left many Hoboken residents in a tizzy. “I was wondering why fire trucks were there. Thankfully no one was hurt,” one Instagram user wrote. “Could’ve been us on that court!” another wrote. “My kid was just standing 15 feet away from this with our nanny,” another added on reddit. After a report of a suspicious package was called in to Jersey City Police on Friday morning, bomb squad technicians came in to access the unknown object. Later, it turned out to be just an air mattress.

A section of Montgomery Streets between Barrow and Grove was shut down around 8 am on Friday so the bomb squad could access the situation. According to one reddit user who claims to live in the immediate area, officers told him to either remain inside his home or evacuate the block.

The investigation of the suspicious package came the same day as reports of package bombs have been found throughout New York City. One of these bombs was addressed to New Jersey Senator Cory Booker; another was found in a mail processing facility addressed to James Clapper.

Bijou Properties is inviting residents to a community meeting on October 29 at 7pm to discuss its construction progress. Bijou is currently working on a two-acre resiliency park, 30,000 square feet of retail space, on-site parking garage, and 424 residential units, 42 of which qualify as affordable housing.

One focus of the meeting will be offering an updated timeline on the 700 Jackson Street development project. PSE&G will also be there to discuss utility restoration on 7th Street between Monroe and Jackson Streets.

The community meeting will be held on Monday, October 29 at 7pm at the Jubilee Center, 601 Jackson Street.

Hoboken police chief Ken Ferrante had words of praise to share on Twitter after Hoboken PD safely disarmed a male with an illegal shotgun. According to Ferrante’s tweet, the incident occurred near 2nd Street and River Street and no injuries were reported.

It all started when officers Joseph Mezzina and Jonathon Lyons {who recently graduated the academy and currently undergoing field training} responded to a call about shoplifting at Giannone Wine and Liquor on River Street. The report came in at about 2pm and alleged suspected thieves stole a bottle of Patron tequila, which is valued at about $50.

Upon arriving at the scene, police found suspects Raffaelle Spadavecchia, 18, of Hoboken, and Eric Williams, 20, of Jersey City, near Third and River. It was then that Lyons observed the sawed-off shotgun, an illegal weapon, sticking out from Spadavecchia’s clothes. Lyons, Mezzina, and a third officer who had only just arrived, Dylan Archilla, worked to apprehend Spadavecchia.

Spadaveccia and Williams were moved to the Hudson County Correctional Facility. Hoboken is following in the footsteps of several New York counties and banning plastic bags in public stores. Single-use plastic carry-out bags will be banned at retail and food establishments as of January 2019. These single-use plastic bags will not be provided to customers, however, compliant bags are available for customers to purchase for anywhere from 10 to 25 cents. The retail establishment gets to keep the money made from the compliant bag fee. {Compliant bags are defined as reusable bags with at least a 40% composition of post-consumer recycled material that’s compostable.} Underground cell service may soon be a reality for commuters using the PATH. The official account for PATH Trains responded to a commenter on Twitter, writing, “We have begun testing cell service in our stations and plan to have it up and running system-wide by the end of 2018.” More details to come as the story progresses.