Summertime is finally here which means one very important thing — planning a vacation. Some people prefer driving to their destination, some flying, and some well, cruising. If you want to go on vacation minus the hustle + bustle of the actual traveling {think: hop in a cab and be about 15-20 minutes from being aboard a ship sailing to an exotic island} — listen up. We are just minutes away from Cape Liberty Cruise Port in Bayonne, so if you’re into cruising and boating to your destination, vacationing is super convenient when leaving from this port. Briana, from the HG team, recently cruised from the Cape Liberty Cruise Port twice and is sharing her experience with us. Read on to learn more about it in our latest #HGSummerFridays series: Cape Liberty Cruise Port is located at 4 Port Terminal Boulevard in Bayonne. Without traffic, the drive from Hoboken is around 20 minutes.

Having someone drop you off is the easiest way to get there, whether it’s a cab, Uber, or a friend/family member. Once you get to the terminal, there are several drop-off points where you can stop and unload your luggage within minutes. If you’d rather drive, you can do that, too. There is a garage on-site that charges $20 per day to leave your car there {double the price for oversized vehicles such as campers and RVs that take up more than one spot}. While this is a super convenient option, we totally recommend being dropped off {it’s way, way cheaper!}. ^^ Before you know it, this will be your view 😉

HG Insider Tip: the terminal opens at 10:30AM, and you should aim to get there at that time. While our ship’s departure wasn’t until 4:00PM, we still got there around 11:00AM and were on the ship by noon and had already started our vacation. The closer to the time of the ship’s departure, the more traffic there was at the port. When we were on the ship, comfortable in our room, we could see a line of cars in traffic from our balcony and were so glad we weren’t one of them. Dranks onboard > traffic on land. Author’s note: I’ve been on Royal Caribbean’s Anthem of the Seas twice and totally recommend it {can’t speak for Celebrity Cruise, but have heard great things!}. It’s a newer ship with a lot of cool features for both adults and children, and not to mention, it’s HUGE. You’d think with over 4,000 passengers it would be crowded, but you only really notice when you’re at the pool. Other than that, you’re basically in a small city doing what you want, when you want. Also important to note — the food was outstanding. ^^ Royal Caribbean’s Anthem of the Seas docked in Kings Wharf, Bermuda during our 9-night Caribbean cruise from Cape Liberty.

We also went to Puerto Rico, St. Maarten, and Haiti. ^^ As we approached the beautiful island of St. Maarten

Destinations include the Caribbean, Bermuda, Canada, and New England and you can get travel for as little as 3 nights to as long as 11 nights. Again, cruising from Bayonne {if you live in the surrounding areas} means almost no actual travel time. Even while you’re cruising to your destination, you’re already on vacation as there are so many things to do on these ships.

Before heading out to sea, you’ll see some pretty cool stuff while docked in Bayonne, such as the entire cruise port itself with different ships, the Tear Drop Memorial, the Verrazano bridge {super, super, close}, and unbeatable views of the NYC skyline and the Statue of Liberty. 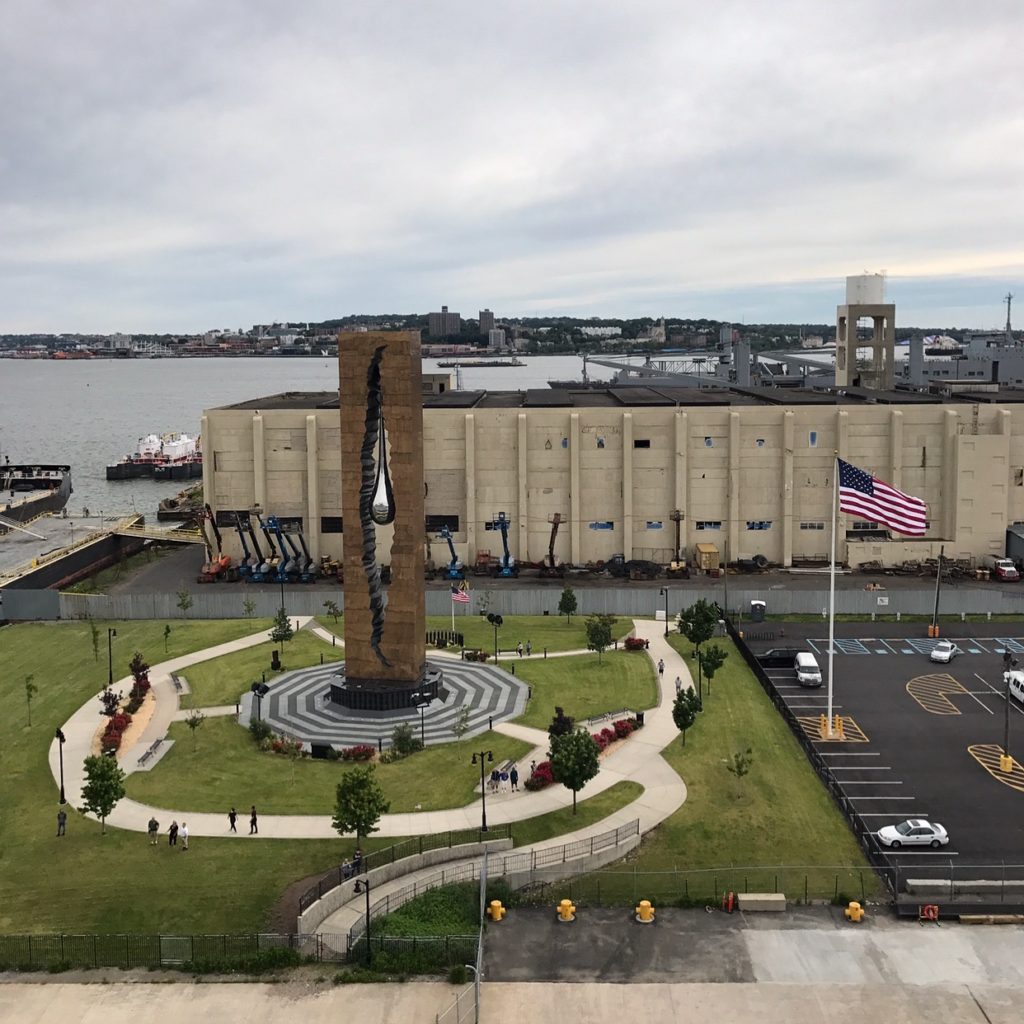 ^^ The perfect view of the Tear Drop Memorial gifted by the Russian government after the 9/11 terrorist attacks.

Often, people will stand here and wave once the ship departs {almost bringing it back to the old days of cruisin’ when people used to get on board and party before the cruise left}. ^^ When sailing out to sea onboard the Anthem of the Seas, we got up close + personal with the Verrazano bridge. It’s the most exciting part of the departure as passengers head to the top of the ship and cheer as the ship goes under the bridge. Such a fun experience!

See More: How to Do Disney World {As an Adult} in Orlando, Florida ^^Lady Liberty in the distance through the clouds, but still pretty close!

Overall, after two times of cruising from the Cape Liberty Cruise Port, it’s safe to say that this is an HG-approved way of traveling, especially if leaving from our area and not wanting to trek to the city or out to EWR/JFK for a flight.

Have you traveled from the Cape Liberty Cruise port? Share your experience with us in the comments!

Fun Boating Adventures to Try Along the Hudson River