Just in time for Super Bowl Sunday, we thought that a feature about a sports journalist who worked as the official team reporter and a fellow Hoboken Girl would be a good fit. Meet Alexandra Giamo, who was privy to exclusive behind-the-scenes access to the players and coaches of the New York Jets in the 2016 season. She traveled with the team, conducted pre- and post-game interviews on the field and in the locker room, and hosted a personality and entertainment-driven TV show called “JetLife” which aired on CBS New York. And while she loves to talk about sports, she also is a straight shooter with a pension for making everyone around her laugh. So without further ado, meet Alexandra Giaimo, our latest Hoboken Girl of the Week. Her biggest source of inspo:

It’s cliche, but my mom is a legit badass and taught me the most important thing in the world – to be confident and not afraid to be myself. She actually inspired me to become a sports reporter when I was a kid. I was the only girl on a little league baseball all-star team. My squad was down by a run and I came up to the plate with two outs. I struck out at the end of the game. I was hysterical because it was the last time I would ever play baseball with the boys. BUT my mom preached that it wasn’t the last time I would be on the field — I would be back on it one day with a microphone in my hand. Since then, it’s been the only thing I’ve ever wanted to do. I’ve been blessed with such a strong support system, so I’m inspired by those who weren’t as lucky and fortunate as myself. Honestly, I’m motivated by rejection. Rejection can sometimes be your best friend, especially in this industry. I tell myself, “Oh you don’t want me? That’s fine, I’ll make you regret that decision one day.” I think everybody should have that mentality because it really does light a fire under your butt! On her passion and goals:

Holy smokes — the sports industry is tough and there are a ton of judgmental people out there. I have never fit a specific gender mold or stereotype so I struggled with my identity, with balancing my public and personal image, with my sexuality – you name it! I led two different lives for a long time because I was afraid of what would happen to my career, but it finally dawned on me that I was doing myself a disservice by hiding from it. I’m trying my best to break down the labels and stereotypes that a ton of people in my situation battle with. I want to use my voice and platform to stand up for people that don’t have the same luxury as I do, and if that hurts my career, so be it. Being a strong female figure in a male-dominated industry and doing things the “right way” is what I pride myself on. I refuse to be labeled as anything but “Bad Ass Chick.”

READ: A Complete List of Female-Owned Businesses in Hudson County 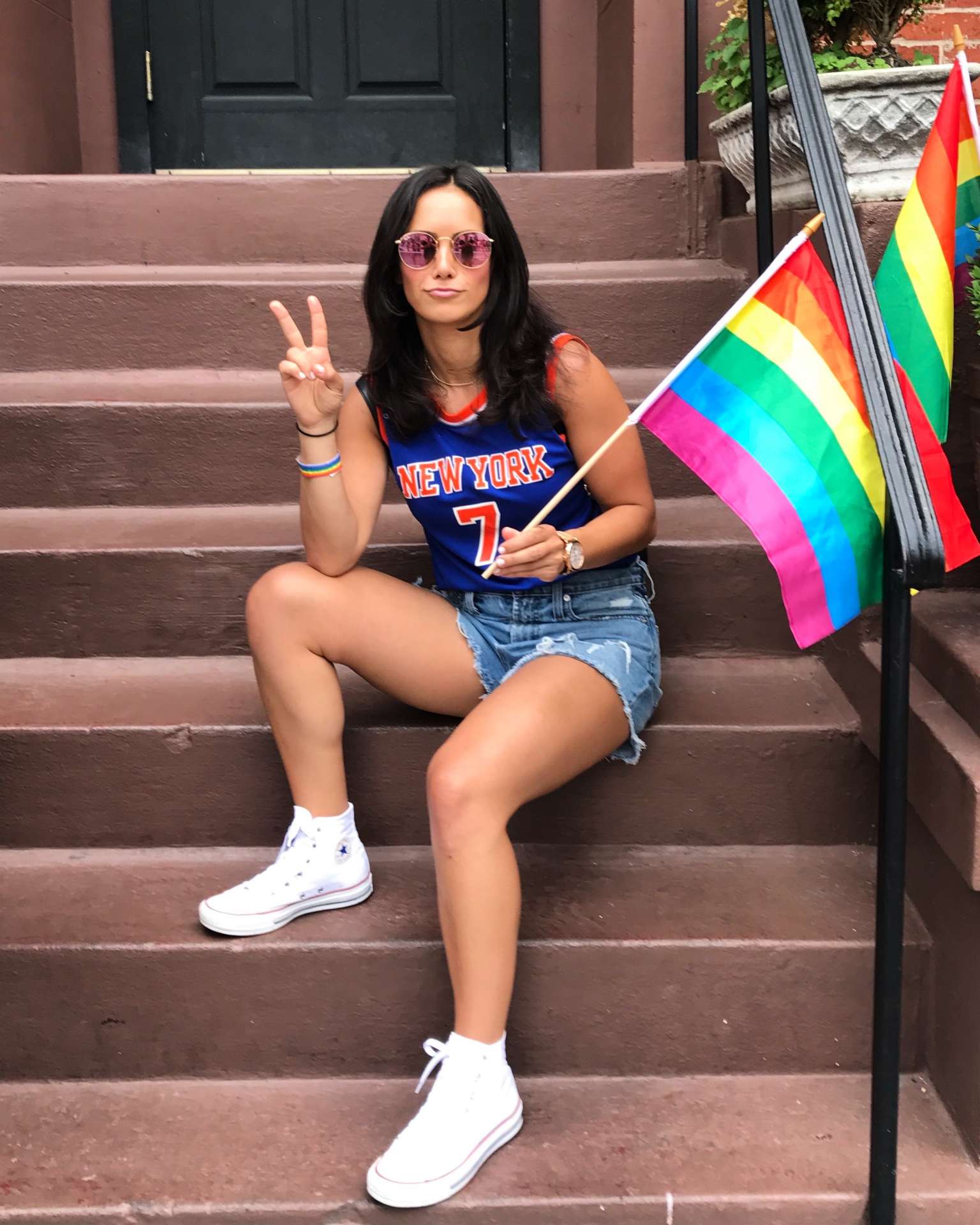 The highs and lows of the job:

There are SO many good highs from doing what I do. I love the adrenaline rush I get from interviewing a player after a big win or a tough loss. I also love going head-to-head with somebody and debating sports because, after all, it is just sports and life goes on! Sports for me is entertainment and I’m thrilled that I get to have fun for a living. You get to meet so many cool and interesting people. You also get to see the athlete as a person; a lot of times people forget that they are also human beings (I’m telling you they are, they just have more money than us!). Some lows: dealing with twitter and Instagram TROLLS who hide in their mother’s basement, always having to wear makeup on camera, embarrassing yourself on live TV or in front of thousands of people if you make a mistake, as a woman — constantly trying to prove that you earned your job through talent and hard work, and not because of the way you look. On her career highlights:

My career highlight is definitely when I interviewed Zach Efron and Hugh Jackman simultaneously at MetLife Stadium. And believe it or not my first ever interview with the Jets was with Eric Decker (yeah that was also pretty sweet). The most rewarding part is when people reach out to me and thank me for speaking up — and they open up about their own similar struggles. Everybody has a unique story. 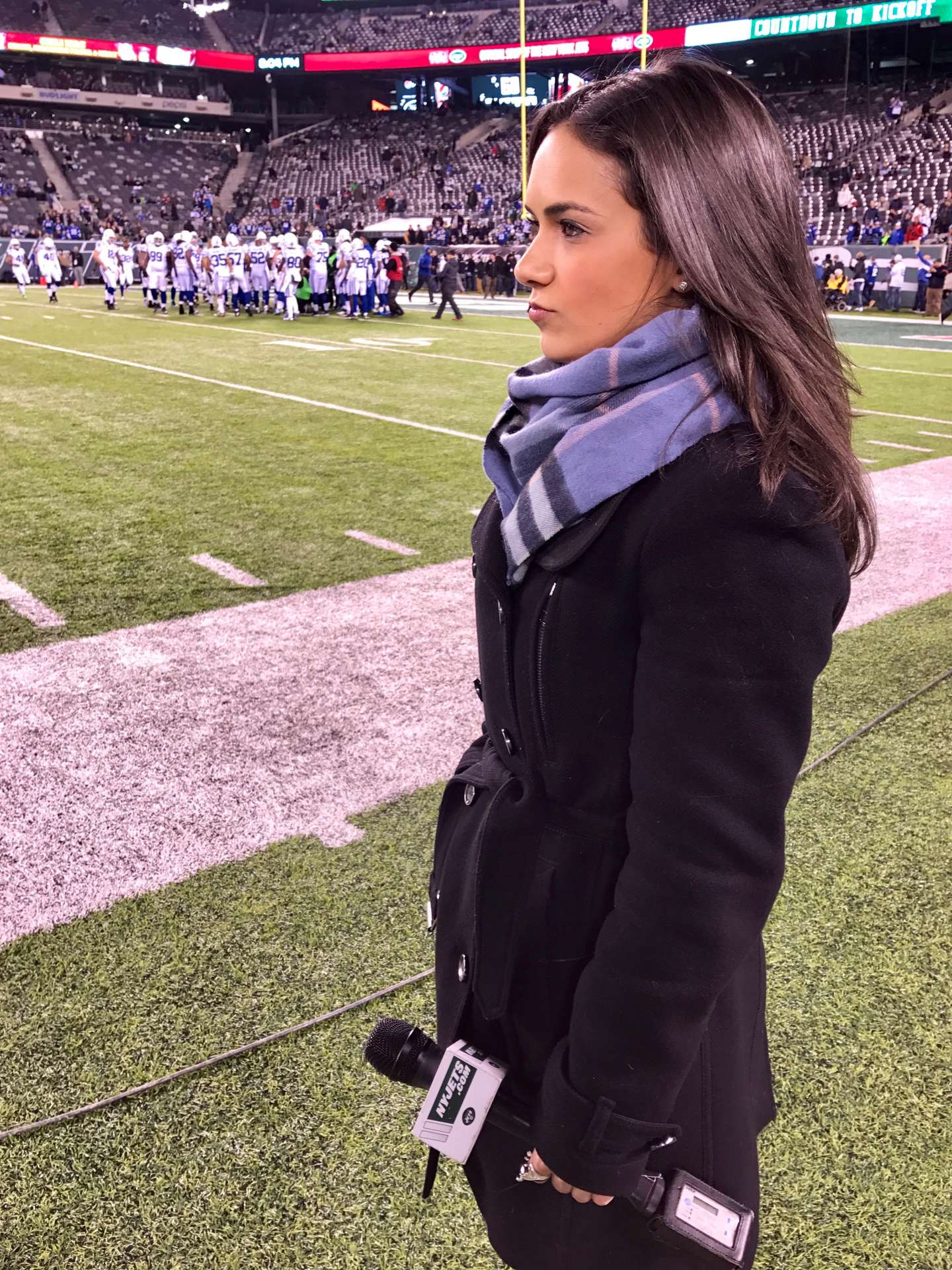 On her days off:

My dog, Mela, the French Bulldog is my best friend. We are ultimate cuddle buddies. We love going for long walks along the Hudson River. There’s nothing better than coming home to Mela, a nice glass of wine, or a piece of cold eggplant parmigiana. Advice for someone just starting out in this field:

STAY AWAY! I’m joking! But make sure you are willing to take some punches in the gut. Just know that it’s not going to be easy and nothing will ever be handed to you. One day you can be on cloud 9 and the next day you can be “let go” because of lack of work or budget cuts. That’s the nature of the business, it sucks. As long as you’re willing to deal with the highs and the lows you can make a career out of it. Her Hoboken + beyond faves:

I don’t have a favorite spot to eat but I love the gluten-free pizza at Bin 14. The cobb salad at the Little Grocery. A burger with shoestring fries at The Elysian Cafe.

I’m going to be honest, I usually drive out to the Short Hills Mall, where everything is at the same place, and I can be as lazy as possible.

My favorite outdoor place is the Shipyard Dog Park or my balcony (it just depends how many little kids are outside screaming on the playground!).

I drive to Orange Theory over in Edgewater when I want a really great workout. I am slightly addicted to it. I highly recommend it because it’s life changing.

What do you love most about this area?

I love that Hoboken is absolutely nuts at times, and so tranquil at other times. I previously lived in Manhattan where it’s constantly insane and it was exhausting. I love that in Hoboken I can sit on my balcony and look at the NYC skyline — and if I want to go into the city I can just hop on the ferry. Nobody does it better than Jersey, and I love being a Jersey Girl.

Can’t a girl get a legit “NYC”-type sports bar up with great food up here in uptown Hoboken?

How to get in touch:

And on that note, y’all, we’ll see you at the Super Bowl. Click here for a full list of bars offering fun + specials in town.

Want to be featured as our next Hoboken Girl of the Week? Know someone who is worthy? Email us! Hello@hobokengirl.com