A brand new café has arrived in Hoboken – and neighbors can check it out this weekend. Uncle Milton’s Café, a shop with a specific dedication to being LGBTQ-friendly, according to its owner, is having its grand opening on April 30th from 12PM to 6PM. The shop is located at 1119 Jefferson Street, which was formerly When in Rome pizzeria. The café will serve coffee, breakfast, sandwiches, and provide catering services – and according to the café’s IG (@unclemiltoncafe), there may even be some free samples to try during its opening event. Click here for what we know about the new café on the (Hoboken) block.

The historic Apple Tree House, located at 298 Academy Street in Jersey City, has officially opened as the newly established Museum of Jersey City. According to Patch, the community attended an open house event on Saturday, April 30th to celebrate the new addition. The event consisted of house tours, art, music, and discussion about the museum’s mission.

Local artist Catalina Aranguren has created an outdoor art experience for the community to enjoy starting Saturday, April 30th. This unique art exhibit is open to the public at the Miller Library Branch, located at 489 Bergen Avenue in Jersey City. The City of Hoboken + Hoboken Housing Authority announced a new community solar program coming soon to Hoboken. According to the City of Hoboken, “Community solar projects enable greater access to solar energy. Electric utility customers who have previously been unable to go solar, due to a variety of factors including cost, unsuitable roof, or lack of roof control, can now access this renewable energy. It will enable low- and moderate-income households and the environmental justice community greater access to clean energy and savings on their electricity bills. ”

Hamilton Park Montessori School, located at 1 McWilliams Place in Jersey City, welcomed several Ukrainian families who are calling Jersey City home for the foreseeable future, according to a press release. In the spirit of partnership and community, the Kondyra family who arrived here in March from Ukraine has just volunteered to revive the school’s rooftop garden and apiary, bringing their love of nature and beekeeping expertise to Jersey City to revitalize the local ecosystem. The City of Hoboken announced it will begin removing abandoned boats from Weehawken Cove on Monday, May 2nd. The City’s Contractor, Ken’s Marine Service, will remove the abandoned and derelict vessels from the water and load them onto barges for transport. The boat removal is anticipated to take up to four weeks. Click here for the history of Hoboken’s ‘Boat Graveyard’. As of Sunday, May 1st at 12AM, registration is open for the 2022 HoBOOken 5K costumed run. The early bird price of $10.29 lasts until Monday. The race is scheduled to happen in-person on October 29th with a virtual race option available as well. All of the proceeds go to the Hoboken Shelter. Runners can register at the following link https://hobooken5k.com/ Kearny has long been wanting a paved riverfront path for the community to use as a walking and biking trail. Now, that path is almost a reality, per NJ.com. The town is now at the stage of bidding for a contractor to build the path, which will be located just south of Linden Avenue and north of Ross Lane. The project will be paid for with state and federal funds.

A new cafe from the team behind Amelia’s Bistro has opened in Jersey City’s West Side. Three Thirds Cafe is now open in the 3 Acres building, located at 400 Claremont Avenue. With beans from modcup coffee roasters, another Jersey City-based brand, and baked foods from Baltazhar Bakery, there’s something for everyone to enjoy. We spoke to manager Alexa Sabato about what patrons can expect from the new cafe. Click here to read what we know. Jersey City’s “comfort food” food truck, No Forks Given, will find a permanent home this fall. After being on the road for the last five years, the restaurant on wheels will stop being mobile in the next few months and will open a location downtown at 115 Brunswick Street, Jersey City. Click here to read about No Forks Given’s new brick and mortar. Jersey City Urby has welcomed a new café called Canard Café Bar. With a location on the other side of the Hudson in Manhattan, local commuters might be familiar with French-inspired restaurant that has more than coffee and pastries. Located at 200 Greene Street, Jersey City, Canard is right near the Harborside Light Rail Station and a close walk to Exchange Place. Click here to read about Canard Café Bar. A Hudson County shopping center will be filling up the empty retail space it has acquired, per NJ.com. Kearney Commons will be adding an AT&T Store, European Wax Center, &pizza, and a Mediterranean grill called Torshi’s. The stores are expected to be open before the end of the year and the exact opening dates will be announced once they are known. These new additions mean the shopping center will be leasing 100% of the retail space available. On Thursday, April 28th, Family Promise celebrated its third annual Giving Day, which raised awareness and showsed support for families battling homelessness. Family Promise’s network of over 200 Affiliates across the country, came together to participate in this annual digital awareness event, per Tap Into. This year, Family Promise asked participants to “Give an Hour”, through volunteering time, a donation, or by raising awareness of the three million children who experience homelessness every year in America.

Jersey City and Hoboken Have Plans to Connect Bike Lanes The mayors of Jersey City and Hoboken are working on a plan to connect two bike lanes and have a protected bike lane, per NJ.com. The preliminary plans are underway for Jersey City’s 18th Street bike lane to connect to Hoboken’s Observer Highway bike lane. This comes after many comments made from cyclists in both the Hoboken and Jersey City area about the dangers of cycling in the area.

NJU Plans to Raise Tuition for the Next Semester Officials are working on establishing a Marion Street PATH station, reported Tap Into. This is due to the growing west side of Jersey City and it would mean there would be a stop in between Journal Square and Harrison. Mayor Steve Fulop has joined Hudson County Executive Tom Degise and U.S. Senator Bob Menendez in seeking the construction for the new station. The City of Hoboken will host a virtual meeting about the public safety component of the proposed $152 million Hoboken Municipal Complex, per Patch. The city wants to build this building on 15th Street. The meeting will be hosted by Hoboken Public Safety Director Ken Ferrante, Police Chief Steven Aguiar, and Fire Chief Anton Peskens.

Mayor Ravi S. Bhalla invites residents to the Hoboken Spring Arts & Music Festival, per this press release. The festival will be on Sunday, May 1st, and it will be from 11AM to 6PM. The festival will feature displays and sales by artists, crafters, food vendors, and local businesses and it will occur on Washington Street.

Jersey City Could Have a New Mixed-Use Building A plan for another mixed-use building could soon be moving forward, per Jersey Digs. New York-based DHA Capital has submitted plans to revitalize several properties at 212-230 Culver Avenue. This proposal is the latest to appear along Jersey City’s West Side. 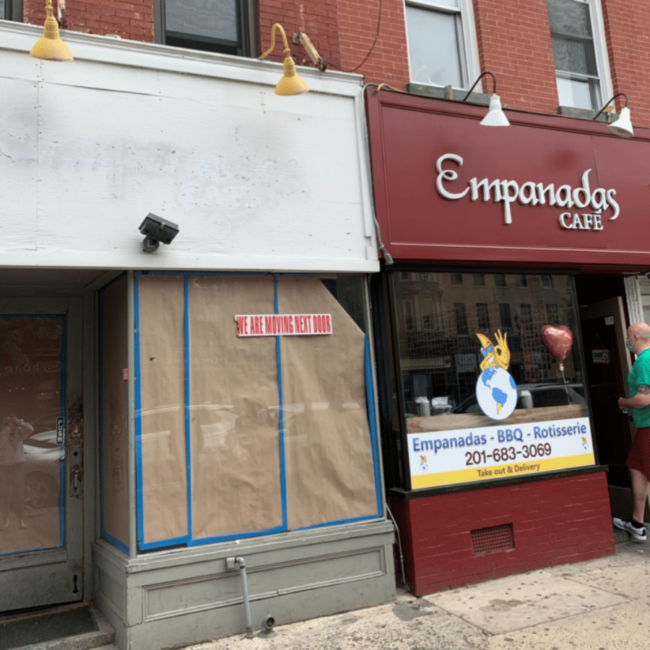 The newest coffee shop on Hoboken’s Washington Street has officially opened for business, reported Patch. Pour Amor opened for business on Saturday, April 23rd, and it serves up specialty coffees and a menu of baked goods. It is owned by Massimo Aronson, who is also the owner of Bagels on the Hudson. Jersey City has been named by Food and Wine Magazine as one of the country’s 11 “next great food cities,” reported Patch. Jersey City was described as “a food city where culture and community keep diners coming back.” It mentions a lot of the diverse restaurants that make up Jersey City’s food scene as well.

Jersey Schools Among Top Schools in the Country A Middlesex County Academy in Edison is among top schools in the country, per Patch. This school is the top school in New Jersey voted the top out of 355 schools in New Jersey. This ranking of high schools is meant to show how well the nation’s public schools serve all nations.

Hoboken Could Get New Seven-Story Building An abandoned building could be the home of some new condominiums, per NJ.com. This seven-story building with 40 residential units would replace the former Rey Foods Inc. building. This new building, located at 511 Newark Street, is envisioned to comprise of 10 one-bedrooms, 25 you-bedrooms, and five three-bedroom apartments. A 20-year-old Jersey City man was arrested after a stolen car was located in Jersey City, per NJ.com. Rahmel Belle was arrested for the crime and a loaded handgun was also found and safely recovered. He was charged with receiving stolen property, obstruction, resisting arrest, aggravated assault, simple assault, tampering with evidence, and many other charges. A man who confessed to a 2020 murder could be spending the next 25 years in prison, per NJ.com. Kenyowa Pinkey has pleaded guilty to the April 6, 2020 shooting of 23-year-old Javone Smith. The state will recommend 25 years in state prison with the No Early Release Act and the Graves Act in effect.

New Bank Opening Up in Hoboken A new bank is coming to the corner at Washington and Fourth streets, per Patch. Blue Foundry Bank posted its new sign on Monday. The bank will have hours Monday through Saturday and this will be one of 18 locations for this bank.

Garden State Parkway Has Been Renamed After Frank Sinatra The Galloway, New Jersey, rest stop on the Garden State Parkway has been renamed the “Frank Sinatra Service Area,” per Patch.​ This is following the state of New Jersey announcing last July that nine highway rest stops throughout the state would be named after icons who are from the Garden State. The sign has gone up nearly two hours away from the singer’s birthplace of Hoboken, but it is close to the Atlantic City casinos where he would perform. McNair Academic High School is in the top 100 public schools in the country and is number 5 ranked around the state, per Patch. McNair is a magnet school amongst Jersey City’s public high schools. The top-ranked schools in the state and national lists tend to be magnet or specialized county schools.